These questions may not have been foremost in the minds of world leaders at last month's United Nations-sponsored "Earth Summit" in Rio de Janiero. But more than 400 eminent scientists tried to bring these matters to the forefront of summit discussions. The scientists signed a document Urging that—contrary to what they see as a dangerously prevalent misapprehension-science should be regarded not as a threat to the planet, but as a source of environmental salvation.

The statement was read at the start of the Rio meeting and published by the Wall Street Journal to coincide with the conclave's opening sessions.

"The greatest evils which stalk our Earth are ignorance and oppression," the document states, "and not Science, Technology and Industry whose instruments, when adequately managed, are tools of a future shaped by Humanity, by itself and for itself, overcoming major problems like overpopulation, starvation and worldwide diseases."

The appeal expresses the apprehension of its signers over "the emergence of an irrational ideology which is opposed to scientific and industrial progress and impedes economic and social development."

The text warns "authorities in charge of our planet's destiny" to avoid making decisions that are supported "by pseudo-scientific arguments or false and non-relevant data."

Explaining the purpose of the Heidelberg Appeal to The Scientist, its author, Michel Salomon, warns that some influential individuals, scientists among them, threaten progress toward environmental improvement by espousing unrealistic theories or ascribing to counterproductive practices. Determination of government policy and the conditioning of public attitudes toward science, says Salomon, the editor of the French science journal Projections, must not be entrusted to "a few freaks pretending that things don't exist."

Salomon cites radical proponents of animal rights as examples of those holding impractical and unproductive ideas; he objects to their belief that "a human being should be treated like any worm, elephant, or flower... that they are all equal." He singles out a prominent environmental organization, the Sierra Club; as an example of a group harboring an irrational ideology.
"The Sierra Club believes a contract exists between nature and man...but nature doesn't speak, so they are the self-proclaimed speakers for nature, which is a very dangerous tendency."

Calling for rationality, Salomon says of the Heidelberg Appeal: "What we are saying is that damage [to the environment] caused by science can be cured by more science and not by less science."

Nobelist Philip Anderson, a professor of physics at Princeton University, asserts that “industrialists, not scientists" are to blame for much of the planet's ecological degradation. Anderson cites the continued dispersal of ozone-depleting chlorofluorocarbons (CFCs) as a prime example of an environmentally hazardous situation that, despite science's disapproval, persists as a result of industrial interests. “It's a sneaky thing to keep the CFC plants going,” he says.

Another Heidelberg Appeal signer, Morton Corn—who is the director of the Environmental Health Engineering department at Johns Hopkins University agrees with Anderson, lamenting the fact that industrial policies have "leapfrogged the science and technical community."

Anderson also concurs with Salomon in the belief that science's pursuit of altruistic Objectives is impeded by forces "that make the public afraid of science." Like Salomon, Anderson assails "animal rights people," whom he describes as "clearly irrational?"

Says Anderson: "This is obvious when they resort to illegality and violence to propagate their ends." He also is harshly critical of what he calls the "neo-Luddites" anti-technology activists who believe that science yields an insidious disturbance of what the Heidelberg Appeal refers to as the planet's "Natural State."

In addition to the neo-Luddites (see story on page 8), Anderson also decries "groups ranging from crystal-gazing radicals to some of the wilder environmental lobbies"

One environmentalist, Jan Hartke, who is president of a nine-month-old Washington, D.C., organization called EarthKind, is not fond Of what he sees as confrontational language in the Heidelberg Appeal. While Hartke agrees that "it's a mistake for the environmental community to be anti-science," he says that” most groups I know and I'm familiar with the positions of nearly all of them-are pro-science."

In general agreement with Hartke is Hilary French, a senior researcher with the Worldwatch Institute in Washington, D.C., who attended the Rio summit. According to French, who says the Heidelberg Appeal apparently had little impact on official summit participants, "any thinking environmentalist is pro-science and sees science and technology in a critical role." She, however, does not go along with the aggressive language of the Heidelberg Appeal, which, she says, "seems to be shooting from the hip."

Despite the prestigious list of Heidelberg Appeal signers and the impassioned tone of the document, some observers interviewed for this article assert that scientists have indeed contributed to the current ecological crisis and should not be trusted with overseeing its remedy. Howard Ris, executive director of a Cambridge, Mass., environmental group called the Union of Concerned Scientists (UCS), says that he knows several prominent researchers who agree that the world needs to be "cautious about the suggestion that technology alone could solve all our problems."

Ris points to scientists in industry who manipulate evidence in order to sustain their employers' financial pursuits. For example, Ris asks, "How do you explain the coal and oil industry, who [downplay the threat of] climate change on scientific ground? This only masks the fact that they don't want to change and hurt their profit."

Countering Ris, however, is another Heidelberg Appeal signer, Arno Penzias, a Nobel-winning physicist at AT&T Bell Laboratories in Murray Hill, N.J. He criticizes some environmental groups, including UCS, for basing their attitudes and activities on emotion rather than fact. "People who get themselves all worked up about moose or caribou or Indian reservations being harmed really have nothing more than an emotional hobby horse," says Penzias.

In direct opposition to the views of Penzias are those of Jeremy Rifkin, the outspoken director of the Washington, D.C.,based Foundation on Economic Trends, who claims that science's abuse of the environment stems from its long-standing position of arrogance in relation to nature.

Rifkin contends that much of modern science is conducted in accordance with the principle articulated by 17th-century philosopher Francis Bacon, who referred to "Mother Nature" as a "common little harlot that needed to be tamed." Rifkin, who has been characterized as a "neo-Luddite," claims that this arrogance has isolated science from the natural order of the environment and has thus contributed to its destruction and pollution.

Will the Heidelberg Appeal turn out to be but a first step in an ongoing and vocal pro-science movement? Salomon says he is thinking about organizing an international meeting of all document signers to discuss their next move.

Princeton physicist Anderson, however, feels that the Heidelberg. Appeal has served its purpose and that nothing further needs to be done. Says Anderson: "The carbon dioxide put into the air with all these people flying to some meeting may not be worth the good that comes out of it. We all know what the right direction is. It's not necessary to get together and produce documents." 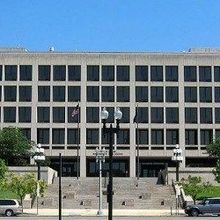