UUbiquitin-related research has made the transition from the basic to clinical arena in the past decade, and the field is now central to understanding diseases ranging from cancer to neurodegenerative disorders. So the Albert and Mary Lasker Foundation thought it only appropriate that this year's recipients of the Albert Lasker Award for Basic Medical Research should go to researchers who were instrumental in the inception of the field. Avram Hershko, Aaron Ciechanover, and Alexander Varshavsky. 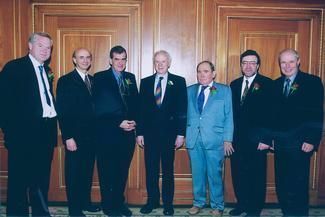 Understanding cellular protein turnover is central to understanding cellular malfunction and disease. Starting in the 1970s, Hershko, now a professor of medicine at the Technion-Israel Institute of Technology in Haifa, Israel, initiated the examination of one particularly key mechanism of protein degradation involving an integral protein called ubiquitin. With the help of several enzymes, called E1, E2, and E3, ubiquitin becomes conjugated to targeted proteins, which are then destroyed by a protease called the proteasome.

Although known to be present in many higher organisms by the mid-1970s, ubiquitin had no known function. Hershko was interested in a long-standing question in the field: Why does the degradation of intracellular proteins require energy, i.e., adenosine triphosphate (ATP)? He wondered if the requirement for ATP hinted at a novel system of protein degradation. Hershko and Ciechanover, who came to Hershko's lab as a graduate student in 1977, managed to purify the agent that caused this degradation in 1978.1 They named it APF-1, for ATP-dependent proteolysis factor 1.

With the help of collaborators at the Fox Chase Cancer Center in Philadelphia, the Israeli investigators elucidated exactly how APF-1 triggered proteolysis: by signaling the proteasome to attack on the targeted protein. Soon after, both the Israeli investigators and their Fox Chase collaborators showed that APF-1 and ubiquitin were the same.2,3 Hershko and Ciechanover, now a professor of biochemistry at Technion, also characterized the enzymes, E1, E2, and E3. The enzymes have become potential drug targets for a number of diseases, including cervical cancer, which is caused primarily by human papilloma virus.

Working at the Massachusetts Institute of Technology, Varshavsky, now the Smits Professor of cell biology at the California Institute of Technology, helped demonstrate the physiological functions of ubiquitin-dependent proteolysis in living cells. Varshavsky had been studying the link between certain chromosomal proteins and ubiquitin--until he came across the work of Ciechanover and Hershko and the 1980 finding that APF-1 was, in fact, ubiquitin. "I felt genetics would be important to understand these [ubiquitin] functions," Varshavsky recalls. "Biochemistry, typically with complex systems, is important but not enough." In 1980, he found a paper describing a mouse cell line that was a ubiquitin system mutant.

In the early 1980s, working with Ciechanover, who had by happenstance come to MIT to do a postdoc, Varshavsky's group used the cell line to show that the conjugation of ubiquitin to other proteins is essential for the in vivo protein degradation and for cell cycling. Varshavsky's subsequent genetic studies in yeast revealed the role of ubiquitin in DNA repair, the cell cycle, ribosome formation, and cellular stress responses. Hershko notes that ubiquitin conjugation is a very wasteful way energywise to regulate proteins compared, for example, to protein phosphorylation. But the cell has its reasons. "The best reason is irreversibility," he comments. With processes like cell division and development, says Hershko, "the best way to progress is to destroy your bridges so you cannot go backwards, only forwards."

In accepting the Lasker award, Ciechanover emphasized that it was an honor not only for his research and the field, but for his home country as well. "Israel is still young, and we are all still in the process of carving our scientific culture and philosophy," Ciechanover said. "I hope that the prize, given for the first time to Israeli scientists, will help to catalyze this process to the better."

Although the aftermath of virus infection in patients is often all-too apparent, the virus that's responsible may prove quite elusive for infectious disease investigators. In the 1960s, unidentified viruses were a veritable scourge on the U.S. blood supply. Based on the detection of an enzyme called alanine aminotransferase (ALT), which is produced in the inflamed livers of affected patients, scientists showed the culprits to be one or more kinds of hepatitis. Hepatitis B had been discovered at that point, but an adequate testing method wasn't available.

Alter, now chief of the infectious disease section at the Warren Magnuson Clinical Center, spearheaded a National Institutes of Health effort to bring down the whopping 30 percent risk of acquiring hepatitis from a blood transfusion. He and his colleagues first showed that much of the bad blood came from commercial sources, a discovery that led to an all-volunteer blood donation system. This, along with the institution of the first test for hepatitis B in 1970, brought down the risk of transfusion-associated hepatitis to 10 percent.4

Subsequent improved tests for hepatitis B enabled scientists to all but eliminate the virus from the blood supply by the late 1970s. Yet cases of hepatitis continued to materialize. When the hepatitis A virus was discovered in 1973, researchers hoped they had found the culprit.5 But Alter, and NIH researchers Robert Purcell and Stephen Feinstone, showed that some other agent or agents were responsible. They dubbed the unknown virus or viruses non-A, non-B (NANB) hepatitis.6

In 1978, to test for the true identification of the virus, Alter set up a panel of sera proven infectious in chimpanzees and NANB. In the next several years, Alter and his colleagues would continue to investigate the clinical consequences of NANB and develop surrogate markers to test for the disease, but his group and many other groups failed to identify the virus.

The solution wouldn't come until 1989 when scientists at Chiron Corp. in Emeryville, Calif., led by Houghton, summoned the powers of molecular biology in a mammoth five-year project.7 Houghton, now director of NANB hepatitis research at Chiron, used dozens of blind methods to literally clone millions of sequences from infected tissue or blood, looking for the one clone that occurs consistently with the infectious state of NANB but not with controls.

"I think generally the field, and I must say us, for many years felt like this was an intractable problem," comments Houghton. "Somehow we were missing something." But perseverance paid off for Houghton and for Chiron, which made millions off of hepatitis C tests developed subsequently. Houghton's award represents the first time the Laskers have recognized the efforts of a biotechnology company.

Though delighted with Chiron's find, Alter was a bit disappointed that he had been beaten to the punch, as he lightheartedly revealed at the Lasker ceremony through part of a poem he had written in 1989 that's titled "There's No Chiron Over Spilled Milk":

It was in Dr. Houghton's viral prescription
To clone the virus by reverse transcription.
Like Jack the Ripper at his most vindictive,
He chopped up the codon with an enzyme restrictive
Could these tiny pieces be of an antigen predictive?
Corporate executives prayed that it would, on their knees benedictive, showing that science and religion are not contradictive.

Not only did Houghton discover the virus, says Alter, but he showed that you could find viruses that you had never seen or tested for--some of them harmless. In fact, according to Alter and Houghton, increasingly sensitive molecular biology detection methods have actually suggested that the body may have a harmless, natural viral flora much as it has a natural bacterial flora. Houghton's group at Chiron is currently working on hepatitis C vaccines and drugs. "We've got to do what the HIV field has done," he says. "We've got to hit the virus at multiple points with specific inhibitors of its life cycle." Alter continues to study hepatitis C and to look for ways to better cleanse the blood supply of hepatitis and other diseases.

Brenner, now the director of science at Molecular Sciences Institute in Berkeley, Calif., has amassed an array of impressive achievements in his five decades of research. In accepting the Lasker, he explained that he was one of the rare scientists who enjoyed the "opening game" in science. He has consistently introduced groundbreaking discoveries, given them a foothold, and then let others fill in the laborious details. Brenner's early achievements included proof of the existence of messenger RNA and the confirmation of the triplet nature of genetic code.

In the mid-1960s, as part of quite a different project, he studied embryonic development and the nervous system in the roundworm Caenorhabditis elegans, which has since revealed a bounty of biological details about multicellular organisms. Brenner later had a crucial role in the controversy over the safety of recombinant DNA, which took center stage at the Asilomar conference in 1973. Using himself as a guinea pig, he showed that genetically weakened bacteria were harmless.

More recent projects include work on the pufferfish, whose genome has an extraordinarily small percentage of junk DNA, an attribute that Brenner contends could provide additional clues into gene function in several organisms. "I wouldn't call it a model organism. I think it's a model genome," explains Brenner. The pufferfish hasn't caught on with many scientists. But Brenner suggests that the modern-day ease with which genes can be tested in a variety of organisms should keep researchers from relying on only one animal model. "We'll have an approach in which you ask the question and then ask what's the best system available without joining the zebrafish party or the mouse party."

Brenner has also joined the huge number of academic researchers who have made forays into industry. He's founded a company called Lynx Therapeutics and started to develop a new method of gene expression that uses microbeads to construct huge DNA libraries.8

Brenner continues to anticipate new research avenues in the wake of the Human Genome Project (HGP), such as sorting out the complexity of protein interaction within the cell. He emphasizes that the HGP is far from over. "It is like sending a man to the moon," Brenner suggests. "When you think about it, sending a man to the moon is easy, it's getting him back that's difficult. So I think we now need to get the human genome to return to work."

Eugene Russo can be contacted at erusso@the-scientist.com.

1. A. Ciechanover et al., "ATP-dependent conjugation of reticulocyte proteins with the polypeptide required for protein-degradation," Proceedings of the National Academy of Sciences, 77:1365-8, 1980.

3. A. Ciechanoyer et al., "A characterization of the heat-stable polypeptide of the ATP-dependent proteolytic system from reticulocytes," Journal of Biological Chemistry, 255:7525-8, 1980.

6. T.L. Lewis et al., "A comparison of the frequency of hepatitis-B antigen and antibody in hospital and non-hospital personnel," New England Journal of Medicine, 289:647-51, 1973.