On an organic farm in central New Jersey, the plants are vibrating with bees. With a swift twist of her insect net, Rachael Winfree captures a wild bee smaller than an adult human's little fingernail, without disturbing so much as a petal of the plant it was pollinating. She is standing over a patch of weeds between rows of upstanding garlic and sprawling watermelon vines, in a region that's part of the Stony Brook Watershed. It is high summer, hot and sunny. Perfect weather for bees.

Unlike commercial bees, which are raised by humans, wild bees create their own living arrangements in the ground, or hollow trees, or construct a nest similar to that of a wasp. They range from the large bumble, Bombus impatiens, down to members of the...

In one study, which measured wild bee visitation to four summer vegetable crops on 29 farms in New Jersey and Pennsylvania over a 2-year period, she recorded 7,400 bee visits and identified 54 species of wild bee. Wild bees were the dominant pollinators for three of the four crops studied: watermelon, tomatoes, and peppers, with cantaloupe being the one more attractive to honeybees.

Scientists in the United Kingdom have found that eight of its bumble bee populations have increasingly restricted ranges and three have vanished altogether. But US researchers have not conducted long term monitoring of wild bee populations, Winfree notes. "There are questions we can't answer."

There is reason for concern: When farm fields are expanded and hedgerows eliminated, much of the habitat for wild bees is lost. Winfree shows me two aerial photographs in scale; one of California's Central Valley and one of an area in southeastern Pennsylvania, which includes a farm where Winfree has done some of her research. The difference is striking. The California fields are "clean," farmed right up to the road or irrigation ditches. Loss of habitat is a problem for California growers, particularly in the almond groves. The Pennsylvania photograph shows small farms with fields and woodlots, surrounded by suburban housing, golf courses and streams with wooded banks - full of habitat for the bees, as well as supplies of weeds and wildflowers, good sources of pollen when vegetable and fruit crops are not in bloom.

And habitat loss isn't the only concern. Southern New Jersey is a major cranberry region and farmers usually bring in hives of commercial honey bees to pollinate the plants. Since cranberry flowers are difficult to pollinate, the growers first spray the surrounding area with herbicide so the honey bees will concentrate on the cranberry flowers and not the wildflowers and weeds. The result is that, over the long term, food for wild bees (wildflowers and weeds) is eliminated.

In one experiment, Winfree and one of her graduate students found a farm that had not yet imported the commercial honeybees or sprayed herbicide, and clipped some cranberry flowers. Back in her laboratory, under the microscope, she found that all of the flowers had been pollinated, meaning that all would have borne fruit without needing to import honey bees. Concluding the story with a grin, she says, "Great for a grant application."

Winfree is also currently working with Martin Wikelski, the newly appointed director of the Max Planck Institute of Ornithology at Seewiesen, Germany. Their plan is to develop a lightweight transmitter that can be carried by bumblebees, so the researchers can track their movements using satellite technology. "This will open up a whole new field of research," she says. 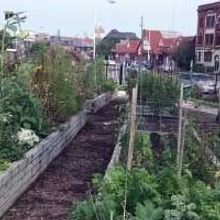 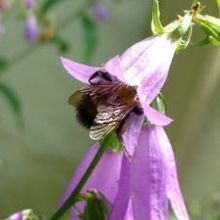 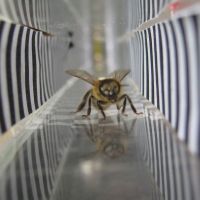