Military planes roar over Warren Grove Gunnery Range in southern New Jersey. A puff of smoke spreads across a clear-cut strip of land where a dummy bomb has just kissed its practice target. From the top of the air traffic control tower Captain Rich DeFeo, the base's environmental manager, points to the hazy skyline of Atlantic City on the horizon. Between here and the casinos, he explains, lies the largest expanse of pitch pine pygmy forest in the world. Dwelling among these dwarf trees are dozens of threatened or endangered plant and animal species, and DeFeo has been charged with protecting them. "It's kind of an oxymoron being the environmentalist in the military. Most people think it can't exist, but it's not true."

DeFeo is one of many natural resources managers working to keep several hundred military installations across the...

Ripley says the Department of Defense lands contain more rare, threatened and endangered species (estimated at 300) than lands belonging to any other federal agency, including the Bureau of Land Management's 300 million acres. Several years ago, Warren Grove began working on its biodiversity conservation plan, and while doing a species inventory, surveyors uncovered a trove of rare finds-species such as the state-endangered northern harrier, Circus cyaneus; the threatened pine barrens tree frog, Hyla andersonii; and Rhynchospora knieskernii, a federally-threatened beak-rush.

Walter Bien, who headed up the species inventory, tromps through a thick area of man-sized pygmy pines, about 20 meters from a road where two Howitzer artillery cannons sit idle, waiting for target practice. He bends down to point out a brown and delicate-looking plant: beak-rush. R. knierskernii has been a particularly interesting discovery, says Bien, because it appears that bombs have actually played a role in the plant's preservation. About 20 years ago, when many other pineland wildlife managers were practicing fire suppression, Warren Grove began a burning regime to prevent wildfires caused from the bombs. As it turns out, the fire cycle at Warren Grove-about every five to ten years-mimics the natural fire cycle in this type of habitat. "They had the ideal conditions here," says Bien, who is also a research associate professor in the Bioscience and Biotechnology Department at Drexel University. "Whether it was benign neglect or on purpose, the disturbance pattern here has been very instrumental in causing this plant to just proliferate."

"Military bases are de-facto wildlife preserves," says Kyle Rambo, conservation director at the Naval Air Station in Patuxent River, Maryland. "Military activity prevents disturbance that could drive some species to local extinction." For example, the station has an airplane tracking radar on a seashore near one of the most popular beaches in the area. The station's beach is off-limits to visitors, Rambo explains, which has preserved habitat for state-threatened least terns (Sterna antillarum) and federally-threatened northeastern beach tiger beetles (Cicindela dorsalis dorsalis), both of which are sensitive to dogs and people walking through the sand.

The military's environmental stewardship includes more than fortuitous accidents, and officials have made major efforts toward restoration. Rambo says the Naval Air Station restored one of the largest blue heron rookeries in the Chesapeake Bay, after fires caused by the Navy destroyed the habitat. There are practical reasons for restoring areas, says Peter Boice, conservation director for the Department of Defense. For example, Fort Hunter Liggett in California experienced a nasty invasion of the spiky-spined yellow starthistle, Centaurea solstitialis, "in the middle of a parachute drop area," says Boice. "You can't expect the troops to go into something that had this thorny plant in it." Since 1999, the base has restored about 5,000 of the 20,000 invaded acres, pushing back the invader's encroachment.

Boice says the military has embraced the idea of conservation, and even acknowledged that protecting the land can improve military readiness. "I've seen pictures of erosion gullies 30 to 40 feet deep with a tank tipped over in one of them. It's not a way to train." 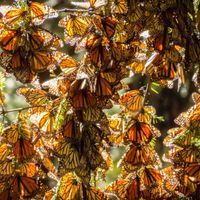