It was the spring of 2005, and some of the rhesus monkeys at the California National Primate Research Center were behaving oddly. Specifically, they were climbing to the top of their chain-linked cages and flipping over backwards, over and over. Others were pacing frantically back and forth inside the cages, or spinning around like children trying to get dizzy.

While this behavior might seem normal for zoo monkeys, it's rarely seen at a primate center, which has an environment that closely resembles monkeys' natural habitat. It told the researchers working there that an unlikely hypothesis about autism spectrum disorder (ASD) might actually be correct.

The idea for the experiment came from work by Judy Van de Water at the University of California, Davis, who had been running experiments on mothers of children with...

"So many elements of the experiment were a long shot."

David Amaral and colleagues at the UC, Davis, MIND Institute decided to test the theory by injecting the antibodies into pregnant monkeys and then observe the offspring. Amaral's team obtained sera from 21 human mothers of autistic children. They looked for antibodies directed against fetal brain tissue and then pooled the samples.

At first everything went normally; the primates' pregnancies went full term. But after six months, within days of being weaned, all the young monkeys whose mothers received autism-associated antibodies started behaving strangely: back-flipping, pacing, and spinning. Using an in-house monkey-human behavior dictionary, the researchers estimated the human equivalent as repetitive hand flapping or jumping up and down. (Autistic children usually display three types of behaviors: poor social interaction skills, impaired communication skills, and repetitive behaviors.) "I was surprised" to see such a strong display of one of the three ASD stereotype behaviors, says Amaral, "especially since so many elements of the experiment were a long shot." In February, his group published its results online in Brain, Behavior, and Immunity.

Not everyone agrees that these behavioral observations in monkeys present clear evidence for an autoimmune basis for autism. Emmanuel Dicicco-Bloom, a neuroscientist at Rutgers University, warns that the study doesn't address potential differences in the human sera among the ASD mothers, nor does it address immune responses the pregnant monkeys might have mounted after being injected. Perhaps most significantly though, no studies have shown that specific antibodies can penetrate the blood-brain barrier and attack specific regions of the fetal brain and penetrate cells, he adds. "There are so many steps that are tantalizing," says Dicicco-Bloom. "We just need a good five or 10 years in the lab with cheaper animals and more experiments." 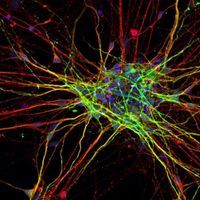