Ana Vicente and her team at the Oswaldo Cruz Institute in Rio de Janeiro began their quest for ancient pinworm RNA at San Pedro de Atacama, a pre-Incan village that was once part of an important trade route to the Pacific coast. Considered the driest place on earth, the region boasts 35 mm of rainfall in its wettest years and is considered a veritable time capsule for archaeologists, says paleoparasitologist Adauto Araujo, "There are so many bodies there, that archaeologists no longer excavate them."

In 1994, Araujo stopped in at San Pedro's Gustavo Paige Archaeological Museum to give long-dead mummies their first colonoscopies. Carefully, he inserted a slender pair of forceps through the anus and plucked dried bits of feces from the colon. In a few cases, Araujo entered the intestine from openings in the mummies' abdomens. A handful of specimens were collected the easy way - from ancient toilets.

Enterobius vermicularis, or pinworm, is an itchy but harmless intestinal parasite that has been with humans since before they were human. Pinworm eggs have been recovered from a communal latrine near the ancient Dead Sea settlement of Qumran, from fossilized feces in Dust Devil Cave in southern Utah, and from the intestinal contents of an Argentinean mummy. Since pinworms require a human host for their entire life cycle, their genes could be used to answer the controversial question of how humans arrived in South America in the first place.

"During the movement from North to South America, this parasite had to have been with humans in order to get here," says Vicente. "Did the pinworms that are here now, come with these ancient human migrations across the Bering land bridge?" The alternative theory - transpacific migration - posits that a second influx of humans took place by sea on South America's west coast. If that's the case, then human pinworms from North and South America will have different evolutionary histories.

Of course, a couple thousand years of heat, humidity, and bacterial activity wreaks havoc on long chains of nucleic acids. Add to that the fact that most coprolites - fossilized feces - were collected by archaeologists who hadn't guarded them from genetic contamination, leaving them languishing on museum shelves for 10 years or more. PCR becomes a nightmare.

Geneticist Alena Iñiguez from Vicente's group was able to piece together an SL1 RNA gene using a molecular magic trick developed in the 1990s and known as reconstructive polymerization. Essentially, the team let these small fragments polymerize on their own before they ran their PCR. Overlapping fragments tend to anneal themselves to each other and are then extended by the action of DNA polymerase. What goes in is jumble and what comes out is sequence.

Dispelling any misconceptions about the work, Araujo says that working with ancient feces isn't much different from handling its modern day counterpart. "Coprolites look like dried feces," he says. Back in Brazil, when he rehydrates samples in a bath of trisodium phosphate, the stench sticks with the lab for three days, after which time he scans the samples for evidence of parasite eggs.

Their work paid off recently, a paper in the International Journal of Parasitology (36:1419-25, 2006), confirms the presence of a pinworm infection in 27 pre-Columbian coprolite samples from the San Pedro site along with two others from Chile and one in Arizona. They were even able to find the SL1 signature in coprolites that had no microscopic evidence of eggs. Although they report a few peculiarities about the gene at the San Pedro site, they don't have enough data to issue a verdict on human migrations.

Iñiguez says the search has only just begun, and they're widening their scope to look at other sites in South America and other parasites. Their work on Trypanasoma cruzi, the protozoan behind Chagas' disease has implications for present day strategies to control the disease.

Though the group spends a good deal of time down in the dumps, the results lift their spirits. When Iñiguez first sequenced pinworm RNA from a reconstituted coprolite in 2003, "It was a big party," says Vicente. In short order the scientists gathered ice, limes, sugar, and Cachaça to mix Brazil's national beverage: the caiphirinia. They washed their hands first. 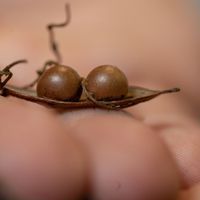