California's Proposition 71 on the Nov. 2 ballot would create a $3 billion California Institute for Regenerative Medicine based on stem cell research. Supporters have raised about $15 million, aired thousands of television ads, and garnered media attention across the United States. But ask a Californian about the local buzz on the ballot initiative and the likely answer will be, "I haven't heard anyone talking about it."

Karen Grant, who works at the Good Ol' Boys Saloon & Sports Bar, just down the road from Disneyland in Anaheim, says the only initiative that's a "big deal" for her customers is one to expand casino gambling. "I haven't heard anybody mention it," Grant says of the stem cell research initiative. When asked whether any customers would like to share their thoughts, Grant calls out in the bar: "Anybody here have an opinion about the stem cell initiative?" The response: "Nope."

There was a similar lack of interest reported among customers at a golf course pro shop in Fresno. Scott Hardie, who works at the Riverside Golf Course, says, "I haven't heard anyone talk about it here."

A poll conducted in September indicated Proposition 71 was leading among likely voters by 54% in favor to 32% against and 14% undecided. Little opposition has been organized against the measure.

Even those who might profit from the initiative don't seem too enthusiastic. Doug Levy, senior vice president at Fleishman-Hillard, an international communications company in San Francisco that advises pharmaceutical and biotech clients, agrees with the poll numbers, but he doesn't think the initiative is a high priority for most Californians. Although the initiative would authorize bonds to provide as much as $3 billion for embryonic stem cell research over 10 years, most of the research grants would probably go to academic institutions and all the findings would be made public, so private biotech firms might not see an immediate windfall.

"At first we thought it would be an opportunity for us and our clients; but maybe it's not so much after all," Levy says. "People don't care about it as much as they do about the presidential election," he adds. "It's not bar talk."

John Hewitt, a journalism professor at San Francisco State University, says people seem to be sympathetic to celebrities, such as Michael J. Fox, who have been campaigning for the stem cell research initiative. However, Hewitt says that most voters don't really know what stem cells are, and their opinions on stem cell research are shaped by larger political concerns, including opposition to federal restrictions on the funding of research using human embryonic cells. "The only thing I've heard in liberal ol' San Francisco is that people are a little bit upset with the president for what they see as stymieing it, but I think Iraq is on more people's minds," says Hewitt.

And even among older Californians, who may have a personal interest in seeing medical advances of the sort promised by stem cell research advocates, the ballot initiative doesn't appear to be a hot topic. At the E.M. Hart Senior Center in Sacramento, Linda (a staff member who declined to give her last name) says she hasn't heard seniors talk about the initiative as she makes her rounds. "They're talking about baseball, football, Mt. St. Helens, Medicare drugs. I haven't heard anything about the stem cell research," she says.

"I'm sure there are people who know about it. They read just about anything that's in the news. They want to know about things and they reach out for resources. But I haven't heard anybody talk about it," Linda says.

In one corner of Madison Square Garden's Expo Center, Persian #175 looks somewhat unhappy being judged. In another corner, a Cornish Rex hairless sounds like an infant as its owner cleans its ears with Q-tips. Signs for the Procurl Harem breeding service are everywhere. And "behaviorist, popular author, and TV personality" Nicholas Dodman gives a dead-serious interview on the subject of litter box behavior and what it says about Fluffy.

It is, of course, the annual Cat Fanciers' Association/IAMS New York cat show. But the real stars this year are 4-month old cloned cats Tabouli and Baba Ghanoush and their genetic donor, Tahini, who are on display to the public for the first time. The Bengal kittens were cloned by Genetic Savings & Clone in Sausalito, Calif., and for just $50,000, the company will clone anyone's cat. For just a fraction of that price, it'll bank anyone's cat or dog genes. Tahini is CEO Lou Hawthorne's son's cat. Her clones are genetically identical, says company spokesman Ben Carlson, according to tests done by feline genomicist Leslie Lyons at the University of California, Davis.

The company uses chromatin transfer, explains chief scientific officer Irina Polejaeva. Donor cells are treated first with streptolysin to make their membranes more permeable, and then with mitotic factors to make the chromatin more accessible to oocyte factors. Although a statistically high-enough powered head-to-head comparison of chromatin transfer and nuclear transfer (the older method used to clone Dolly) has not been done to determine which technique is more efficient, Polejaeva says studies in calves have shown that gene expression profiles characteristic of early embryonic development are more likely to show up in chromatin transfer-derived embryos (E.J. Sullivan et al., , 70:146–53, 2004). Combined with a nonstatistically significant trend for improved survival, she says, the company believes the data are good enough to support the choice of chromatin transfer. Just one transfer is performed at a time to prevent multiple cloned offspring. Cats' gestation period is about 60 days, so the average cloning process, which involves a few attempts, can typically take about six months, says Polejaeva.

Tabouli and Baba Ganoush, who were carried by different mixed-breed surrogates, met Tahini only a few weeks before the show, says Hawthorne. It wasn't a pleasant family reunion: A video of the episode shows Tahini hissing at her genetic offspring. (It also shows the clones hissing at each other. "Is this sibling rivalry?" a voice-over asks. "No, it's self-loathing.") The two are cat clones #2 and #3, preceded by the first "copycat" named CC, a black and white calico who turned out to look nothing like her genetic donor, Rainbow, an orange and white calico. Company scientists didn't realize that calicos exhibit X chromosome inactivation, explains Hawthorne. He says the company now has created a fourth clone, 8-week-old Peaches, whose genetic donor, Mango, is a mixed breed.

Carlson says that purebred pet lovers comprise one targeted customer group, but pet owners who want to maintain a precise mix that may never appear again also are important to the company. At $50,000 per clone, its customer base may be quite small, so the company is working to automate the process to bring the price down. In the meantime, it offers three levels of gene banking. For $295 plus $100 a year thereafter, pet owners can send a biopsy specimen that is then dissected mechanically and put into deep freeze. For $895 plus $100 a year thereafter, the company will culture the cells to ensure growth, and then freeze them. Finally, for $1,295 plus $150 a year thereafter, the company will culture cells from a biopsy specimen of a deceased animal.

The compelling question for this reporter is, where is Hummus? Carlson won't say, but says that one potential client had a similar idea: "She came to us and said her cat's name was Falafel, and asked if we could give her a special rate."

Botox users, consider yourselves warned. New research at the University of Wisconsin, Madison, could reveal the secret of your seemingly improbable youthfulness. Neuroscientist Edwin Chapman and his colleagues describe in a recent issue of 1 a method that, instead of relying on functional or biochemical methods to detect the toxin (which can take days), can spot the botulinum toxin in living cells far more quickly.

The researchers successfully tested the technique in vitro using cells from rats, a species not known for using Botox to shave years off their whiskered faces. The method attaches two proteins (CFP and YFP), derived from green fluorescent protein, to plasma-membrane proteins that are cleaved by the toxin and are vital for the transmission of nerve impulses. When the proteins are intact, a fluorescent signal can be detected. When the proteins are cleaved, the signal is abolished.

Chapman says that the assay is really designed for, among other things, searching for toxin blockers with high-throughput screening. "You can put a million compounds onto the cells and look for compounds that inhibit the action of the toxin," he says. "That's the real beauty of it." The researchers also are using the technique, which is sensitive to the picomolar level, to test for the presence of the toxin in substances such as milk.

"If you have a lot of toxin it can take seconds; if you have a little toxin it might take hours," says Chapman. The amount that is considered "a lot of toxin" might be different in the Upper East Side of Manhattan and elsewhere, but both Chapman and colleague Min Dong say that the amount of toxin used (in the femtomolar range) to smooth out lines and wrinkles is far too low to be picked up by the test. But Dong acknowledges that it could be done, in principle. It just may be a matter of time before you can no longer lie about your age. 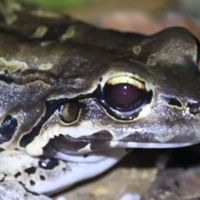