When Robert May stepped down as president of the UK's Royal Society toward the end of last year, he went not with a whimper, but a roar. In the last speech of his five-year term, the Australian-born physicist and population biologist warned his audience in the gravest terms about the threat posed to science by all forms of fundamentalism: "Ahead of us lie dangerous times. There are serious problems that derive from the realities of the external world: climate change, loss of biological diversity, new and reemerging diseases, and more. Many of these threats are not immediate, yet their nonlinear character is such that we need to be acting today."

Robert May
courtesy of the royal society

"Sadly, for many, the response is to retreat from complexity and difficulty by embracing the darkness of fundamentalist unreason. The Enlightenment's core values, which lie at the heart of the Royal Society—free,...

May had picked out some of those threats during his speech: those in the United States who argue for equal time for intelligent design in the science classroom; the Vatican, for hindering the dissemination of successful HIV prevention strategies; and campaigners who aim to deny climatic changes.

The speech was part of a broader swathe of public lambasting May undertook around the time of his stepping down. A few days earlier, for example, The Observer newspaper had quoted him ripping into the "bunch of academic apparatchiks" who were threatening Britain's scientific brilliance.

The end of his term might have been a period of concentrated criticism, but it wasn't out of character, May said in a telephone interview from his office at the University of Oxford last month: "If you look back over my scientific career, it hasn't been one that has shirked controversy."

In fact, May says that speaking truth to power has long been an important role of the Royal Society, which was founded in 1660. "The Royal Society has always spoken its mind on occasions where it thinks it ought to be spoken," he says, and he expects it to continue to do so under his successor, astrophysicist Martin Rees. "My successor is an old friend—I'm very confident, and look forward to Martin's presidency."

Meanwhile May, 69, is looking forward to the next phase in his life. "I really enjoyed it thoroughly," he says of the presidency. "At the same time, it's equally going to be nice to have some time to spend of all the other things I'm interested in." Those interests include the ecology research his group is doing in the department of zoology at Oxford, where he feels "more like an upmarket postdoc with some theoretical physics skills" rather than a leader.

They also include his role as a member of the UK House of Lords since 2001. He and other scientist peers have fought and won some important battles in the upper house in recent years, he says, and he's looking forward to giving that role the attention it deserves. British politicians might want to brace themselves. 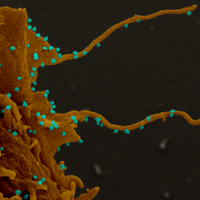