Larry Rome is a professor of biology at the University of Pennsylvania who studies how frogs and fish move. His latest project, however, is more of an engineering feat: A backpack that scavenges energy from its wearers as they walk. Rome's team developed the device with funding from the National Institutes of Health and the Office of Naval Research for soldiers to use in the field as a substitute for heavy replacement batteries. "If you ran out of batteries in the mountains of Afghanistan you can't go to the local drugstore" to replace them, Rome says.

Reported earlier this month in (309:1725–8, Sept. 9, 2005), the backpack combines a rigid frame with a metal load plate suspended from the frame by springs. As the user walks, the load moves up and down along vertical rods connected to the plate, and energy is generated by a rack-and-pinion device attached to the frame and plate. A person walking with an 80-pound load can generate up to 7 watts – more than enough to power a global positioning system (GPS) or cell phone, Rome says.

How a biologist came to work on such a device isn't quite as puzzling as it would appear. The Office of Naval Research approached Rome about a project on submarine motion, given his expertise, and mentioned the problem of harvesting energy from human motion. From there, he thought of the backpack. He wasn't the first to come up with such an energy scavenging system. Thad Starner, of Georgia Institute of Technology, and Joseph Paradiso of Massachusetts Institute of Technology, did that in the mid-1990s. Their system, however, which used shoe-embedded piezoelectronics to harvest energy from walking that would normally be dissipated into the shoe itself, was less efficient and required wires protruding from the generator to actually power small devices.

Rome's model also has issues, even if the wires are less obtrusive. Co-author Taeseung Yoo, a postdoc in the Rome lab, notes that the springs used to decouple the load from the pack frame are noisy when they move up and down. Starner points out too that the elaborate mechanism should be encapsulated to make it less vulnerable to the environment. "You would want to keep the gears from getting dirty or gunked up."

Still, Rome's system "creates a useful amount of power, is relatively simple, and puts the power where you need it," says Starner, whose scientific "day-job" of wearable computing perhaps made him more likely to come up with such a device. Rome has applied for patents and founded a company called Lightning Packs LLC to market the technology, which will cost an estimated $300–400 per unit when it becomes commercially available.

Once developed, it's likely to be met with enthusiasm on multiple fronts, says Rome. "People want to use this kind of thing on cars to recover energy from shock absorbers, or on sailboats to power ham radios,” he says. “Since this isn't my field, I don't have their mind-set, and it's fascinating that people want [the device] for uses I hadn't even thought about." 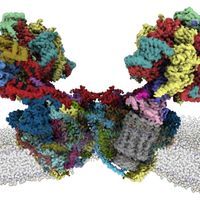