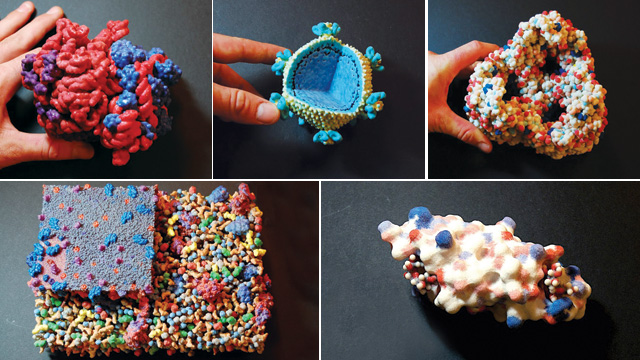 If you’ve worn out the spike on your stiletto, misplaced your kazoo, or you need a cheap little centrifuge, three-dimensional printing and a growing community of designers devoted to open-source software have the solutions for you. Once considered the realm of tinkerers and toy makers, 3-D printing is providing scientists with a treasure trove of opportunities to custom-design equipment and experiments. Kevin Lance, a graduate student at the University of California, San Francisco, once fixed a broken Pipetboy by simply drawing up the dimensions of the disabled part and printing it out. “It was an obscure internal part. You’d have to spend hundreds of dollars on a replacement,” Lance says. It took him a grand total of a few hours to make the part himself. Inspired by such industriousness, Lance and a group of other graduate students recently sponsored a competition called “Print My Lab.” The second place winner in the novel-gadget category was an iPhone mount for a dissecting microscope, and the first place invention, a “petristencillator,” was a set of petri dish inserts with slits like pie slices, used to divide up growth plates into equal sectors.

In its newest and most sophisticated role, 3-D printing is actually doing the science, rather than just supplying the parts. Leroy Cronin at the University of Glasgow used a 3-D printer as a chemistry lab. He designed a reaction vessel (printed from silicone bathroom caulk) and used it to synthesize novel compounds: two inorganic nanoclusters and one organic compound (Nature Chemistry, 4:349-54, 2012). The printer dispensed the reagents into separate chambers of the vessel, and the researchers then sucked the chemicals into a third mixing chamber to produce the new compounds. “It’s like you’re baking a cake, but also making the baking tin,” Cronin says. His team also lined other vessels with catalysts or electrodes, so that the container itself actually takes part in the experiment. Chemists will no longer be limited to thinking about chemistry as reactions done in static containers, he says, instead considering the container as part of the reaction. “What I loved about this paper is there is some cool chemistry in there, but that was not the point,” says Joshua Pearce, a professor at Michigan Tech. “They’re using a 3-D printer to attack chemistry in a way it’s never been attacked before.”

Arthur Olson, a professor at the Scripps Research Institute in La Jolla, California, is using 3-D printing to turn back the clock on biochemistry. For decades, computer screens have offered scientists the best look at the structure of molecules. Such 2-D models can rotate and flip and change shape, but “manipulating and dealing with the physical object has a lot of perceptual richness to it that you don’t get moving a 2-D image on a screen,” says Olson. In the 1990s he started using a 3-D printer to return to the old method of visualizing molecules using a physical model he could hold in his hands. The models became so popular that Scripps now offers a molecule printing service.

While hard-copy models are helpful for teaching or simply visualizing protein structure, “the computer was also an incredibly valuable way of looking at 3-D data. We didn’t want to get rid of that,” says Olson. He’s since developed a way to blend the two approaches, so that a person can manipulate the models while a computer watches. For instance, if Olson is interested in developing a small-molecule drug to bind a protein, he can move the two 3-D models into different docking scenarios, and the computer will calculate the energy of the interactions and whether they would fit well in that configuration.

Olson’s “augmented reality” program is still in a prototype phase, as are a lot of 3-D printing applications. But Pearce says that 10 times a day new open-source designs are being posted online, and the cost of a printer is now down to about $1,000. “It’s expanding so quickly it’s truly incredible,” he says. “When I was a kid, the idea of being able to [design] something and make a 3-D object was incredible. Now I have one at my house.”