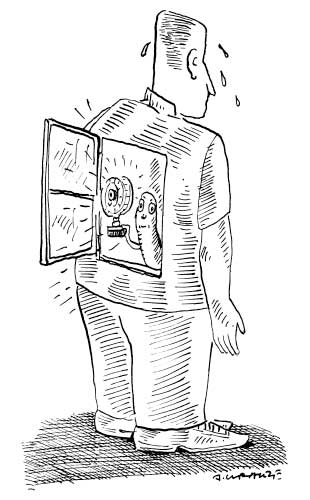 ANDRZEJ KRAUZEIn 2013, bioengineer Wen Wang, then a research scientist at MIT, attended a talk on how Bacillus spores shrink in response to falling relative humidity. The research, published the following year in Nature Nanotechnology (9:137-41), focused on using this property to extract energy, but it gave Wang another idea: What if she could use shape-shifting bacteria to develop a material that would ventilate upon sensing the sweat of its wearer? “Humans are a natural source of humid air,” she says. “We thought maybe we can do something related to garments.”

She teamed up with her friend and colleague Lining Yao, also a researcher at MIT’s Media Lab, and began testing what caused the spores to change shape. Through a process of elimination, the team found that it was changes to the proteins inside the spores that contributed the most to the volume change, though DNA and...

Then came the challenge of designing a garment that would open in response to sweat, to allow the wearer to get additional ventilation as their body heat rose. Despite pinning the shape response on the bacterial proteins, Wang and her colleagues decided to use whole bacteria for this part of their project, in part because they are so easy to produce. “One bacterium, overnight, becomes millions,” Wang explains. Whole bacteria are also more stable than naked proteins, she adds, and using whole bacteria could also enable the team to one day endow the garment with additional functions, such as consuming sweat, emitting light, or producing a pleasant-smelling odor.

That’s the advantage of our garment—it’s helping you remove the moisture immediately.—Wen Wang

Using a 3-D printer, the team laid down a layer of bacterial cells directly onto latex sheets. However, due to the high relative humidity of the printing conditions, the resulting material curled toward the bacterial side of the fabric at normal room conditions. This is the opposite of what the researchers wanted: they were hoping to create a material that was flat at normal conditions and curled in response to high humidity. To solve this problem, the group decided to print bacteria on both sides of the fabric. This way, both sides would respond equally to room conditions, and the fabric would remain flat. But when one side was exposed to humidity, as would be the case for the interior of a shirt, that side would expand relative to the opposite side, and the material would bend outward.

With the help of added collaborators, the researchers used a version of the triple-layer fabric made with Bacillus subtilis to create responsive vents on the back of a shirt. The team then had volunteers wear the garment while running on a treadmill or cycling on a stationary bike, and monitored their skin temperature and humidity. In just five minutes, the vents started to open up, allowing the sweat to evaporate and lowering the wearers’ temperature to a greater degree than experienced by people who wore a control shirt with nonfunctional flaps (Science Advances, 3:e160198, 2017).

Wang herself tested out the prototype, along with the control shirt. “When I wore the control version, I felt really, really humid and hot,” she recalls. “When I wore the functional one, once I started to sweat, it opened very naturally, and then I could feel air flow come to my back.” This sort of ventilation system cools the body, while the shirt itself does not absorb the sweat, thus staying dry. “That’s the advantage of our garment—it’s helping you remove the moisture immediately [through evaporation]. Then body temperature will drop.” Once that happens, the relative humidity equalizes on both sides of the garment, and the flaps close again.

“I think it’s amazing,” says Ozgur Sahin, a biophysicist at Columbia University who coauthored the 2014 Nature Nanotechnology paper but was not involved in the shirt development. “This is a very good example of the material directly responding to a stimulus—in this case, it’s sweat—and it’s responding in a way that helps the person lose heat.”

Wang’s team also made a prototype shoe using a nonpathogenic strain of E. coli, with responsive vents in the sole. As a proof of concept that additional functionalities could be incorporated into bacteria, the team equipped both species with the gene for GFP, which loses its ability to fluoresce under dry conditions. Sure enough, the shirt and shoe flaps started to glow as they opened up in response to increasing humidity. The researchers are now in the process of figuring out how to commercialize the products, including making the garment washable by having the bacteria or cellular materials bind covalently to the latex. New Balance was a sponsor of the research, and Wang says that the team had been approached by several companies interested in the technology.

Patrick Mather, a materials scientist at Bucknell University who was not involved in Wang’s work, noted that this is not the first time researchers have devised materials that vent. “The idea is that, if you have a bilayer of two soft materials, and one reversibly contracts, then you can get these effects that can be used for venting,” he explains. And some sportswear companies have already filed patents in this space. “There are different concepts out there for active sportswear; venting is kind of the lowest-hanging fruit.”

But this is the first time Mather has seen the use of cells to drive the response, and in other prototypes he’s seen so far, venting is triggered by heat, not moisture. In Wang’s work, “that the moisture sensitivity is coming from a biofilm—that’s cool,” Mather says. “The timescale is right, the humidity level is right, for the application in sportswear.” Another benefit, he notes, is that the curling is gradual, with the angle changing slowly with relative humidity. “That’s really nice. Instead of just being on and off, open and close, it’s more gradual and continual.”

Both Sahin and Mather say they’re excited to see what might come next, especially if big-name companies start pouring money into the research. And even on the basic research side, “I think a lot of people will now run with this,” Mather says. “When papers like this get published, it’s good because it stitches communities together, and at the interface between two communities, usually that’s where the big leaps happen. Because people are like, ‘I’ll try the simplest thing a microbiologist would ever try,’ and that may be revolutionary for a materials scientist, or vice versa.”