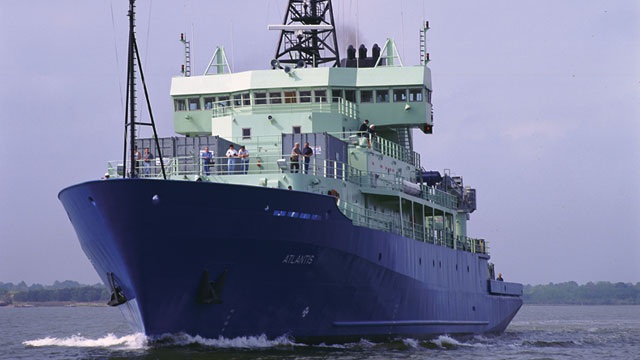 MOTHER SHIP: The R/V Atlantis, seen here on its maiden voyage to the Woods Hole Oceanographic Institute in 1997, ferried Virginia Edgcomb and her collaborators to areas in the Mediterranean Sea that harbor hypersaline environments deep under the surface.PHOTO BY SHELLEY LAUZON, WOODS HOLE OCEANOGRAPHIC INSTITUTION

On a late-November morning in 2011, microbial ecologist Virginia Edgcomb of the Woods Hole Oceanographic Institute (WHOI) departed Piraeus, the port of Athens, Greece, with a few dozen other scientists on the R/V Atlantis, a US Navy research vessel operated by WHOI. Their destination: a group of super-salty, anoxic basins on the floor of the Mediterranean Sea several hundred kilometers away. These unique habitats, which can be more than 10 times the salinity of normal sea water and depleted of dissolved oxygen, were created as tectonic activity in the Mediterranean region exposed buried salt deposits that had formed when the...

“They are among the most extreme environments on Earth,” says deep-sea biologist Roberto Danovaro of the Polytechnic University of Marche in Ancona, Italy. “They put together anoxic conditions, hypersaline conditions, and also concentrations of specific ions that are almost incompatible with some physiological functions of cells.”

A few years earlier, however, Michail Yakimov at the Institute for Coastal Marine Environment in Messina, Italy, had sent Edgcomb samples that he had collected from two of the basins in 2003, in which she detected protist DNA (Extremophiles, 13:151-67, 2009). “In almost every extreme hypersaline habitat examined to date . . . protists were either completely absent or very rare,” she says. “So it was surprising that we were recovering the signature of so many protist groups.”

Intrigued by those initial findings, Edgcomb received National Science Foundation funding to further explore the Mediterranean hypersaline basins. Onboard the late 2011 expedition was Jason, a remotely operated vehicle (ROV) that could give the researchers “eyes, so to speak, on the sea floor,” Edgcomb says—3,000 to 4,000 meters below the surface.

And it was an interesting sight, indeed. The hypersaline water of the basins is so dense that it mixes very little with the surrounding water. “We could see tin cans, bottles, floating on top of the brine,” Edgcomb recalls. “Jason, in fact, had a hard time going down into the brine to sample because it was too buoyant.”

“It looks like a lake surface,” agrees microbiologist Alexandra Stock, a postdoc in Thorsten Stoeck’s lab at the Technical University of Kaiserslautern in Germany and a researcher on the 2011 cruise.

Despite Jason’s difficulties, the ROV and other methods were successful at helping the researchers collect samples. After more than two weeks at sea, the crew returned to shore with dozens of water and sediment samples from four different hypersaline basins—including samples from the basins themselves and from the buffer zones, or haloclines, that sit just outside the perimeter of the dense, super-salty water. Back in the lab, Edgcomb and her colleagues are analyzing gene expression patterns of different water and sediment samples to compare metabolic activities within the communities; estimating the biodiversity of bacteria, archaea, and eukaryotes in the haloclines and the basins themselves; and exploring the ecosystem effects that protist grazing is having on the halocline of one basin and on the Mediterranean Sea in general. 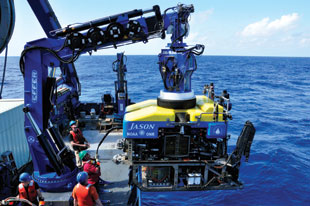 DEEP DIVER: Jason, a remotely operated vehicle, plumbed the depths at and around the hypersaline basins, collecting samples as it wentPHOTO BY JILL MCDERMOTT © WOODS HOLE OCEANOGRAPHIC INSTITUTIONBy analyzing samples collected on earlier research cruises, Edgcomb, Stock, and their colleagues have already learned, among other things, that the basins harbor diverse communities of large unicellular eukaryotes known as ciliates (BMC Microbiology, 13:150, 2013). Not surprisingly, they found that the ciliate communities in the haloclines immediately above the brines, where mixing with seawater occurs, were more similar to one another than the communities within the brines themselves. For Edgcomb, the results confirmed her suspicions. “Even though they’re close together—some of these basins are only a few kilometers apart—the chemistry of those habitats is so different, I would think that that would select for different types of organisms that could tolerate each set of conditions,” she says.

Indeed, the fact that the basins are isolated from each other—and considerably different in terms of their chemical composition—is intriguing to evolutionary biologists, who have compared the hypersaline basins to isolated island ecosystems. “These are like reversed islands,” says Danovaro. “Instead of emerging from the sea surface, they go down into the seafloor.”

The basins, many of which are only 2,000 to 3,000 years old, are still too young for researchers to get a sense of how their resident populations are evolving, says Edgcomb, who is more interested in how the eukaryotes there are surviving at all. “[We’re] trying to understand the limits of life for eukaryotes, and whether we can extend what we know as the limits of life for protists,” she says. In addition to being hypersaline and anoxic, the basins are also “the only known Earth environments that are similar to suspected magnesium-rich habitats on Mars, Europa, Titan, and Enceladus,” she adds. In some areas, the concentrations of magnesium are so high, they “appear to just mummify everything,” Edgcomb says. Indeed, “it is debatable . . . whether [the] cells are alive or simply preserved in the brines, since high salts and particularly high magnesium are excellent preservatives.” But the new findings suggest that microbes are indeed living in the haloclines, which also harbor relatively high levels of magnesium. “Protists appear to cope with higher magnesium concentrations than I thought,” she says.

The researchers still don’t know exactly what components of the environment explain the varying species compositions of the different basins, however. Stock and her colleagues are reviewing the data and asking what other factors—perhaps some that they didn’t measure—might play a role. In addition, the researchers are working to get more sequence data, examining the physical features of the organisms themselves, and preparing samples for scanning electron microscopy. “These basins have already demonstrated [that they] hide important stories to be told,” Danovaro says.