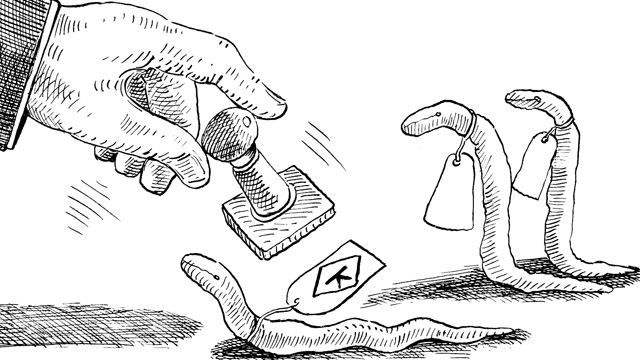 How can you tell if there are microscopic worms in your sardines? “It’s not simple,” Rabbi Chaim Goldberg says about distinguishing nematodes from other, innocuous white stringy bits in the fish. So Goldberg’s nematode-expert friend, armed with a toothpick and good light, gave him lessons in his synagogue’s kitchen over several Sunday mornings in March 2011.

Goldberg was hunting nematodes because he works for the New York City-based Orthodox Union (OU), one of the largest certifiers of kosher food in the world. Only some kinds of parasites are allowed in kosher fish, and the type of worms that sometimes show up in canned sardines might have been the kind that renders them unkosher. So Goldberg, OU’s “fish expert,” was brushing up on his worm-finding skills before he and several of his colleagues brought their problem to parasite experts at the American Museum of Natural History (AMNH) in...

A complex set of rules, which are periodically re-interpreted in the face of new information but ultimately rooted in a pre-microscope, medieval understanding of the world, governs whether a food is kosher. Worms, for instance, are not kosher, says Rabbi Chaim Loike, a colleague of Goldberg’s at OU who collaborated on the nematode project. But fish infested with nematodes belonging to genus Anisakis is kosher according to the Talmud’s rules for parasites. There are also three categories that can help classify whether a parasite renders a kosher host unkosher, says Loike: visible, barely visible, and invisible. Invisible organisms cannot make a kosher food unkosher. Otherwise, bacteria, which are not kosher in isolation, would render virtually all food inedible under Jewish law. So a fish that swallowed a parasite larva, invisible to anyone without a high-powered microscope, is still kosher. If the larva goes on to grow in the muscles of the fish, it’s considered “from” the fish, and the piscine host remains kosher, according to ancient Jewish texts. But other parasites, like those found in the nostrils, behind the ears (for example, in a sardine’s brain), or in the alimentary canal, clearly developed outside the fish and will render it unkosher, explains Goldberg.

Goldberg’s friend, who insisted upon remaining anonymous for the purposes of this story, conducted research showing that the worms turning up in the flesh of the sardines might have migrated there after growing to visible size in the gut, meaning they might not belong to the genus Anisakis, the larvae of which are known to develop in their host’s muscles and gut walls after the fish eats zooplankton harboring microscopic Anisakis larvae.

So Goldberg, Loike, and another OU colleague bought various brands of canned kosher-certified sardines at supermarkets and brought them to biologist Mark Siddall at AMNH. Siddall planned to use DNA barcoding—where a single mitochondrial gene is sequenced to determine species—to identify the nematode species and ascertain whether the sardines could be certified kosher.

The rabbis had arrived at AMNH after a thorough literature search and conversations with relevant researchers, who had all pointed them in Siddall’s direction, says Sebastien Kvist, a graduate student at AMNH’s Richard Gilder Graduate School who works with Siddall. “They were really well informed,” he says.

The scientists were startled at the number of tiny worms they could see in the fish samples brought by the rabbis. But there was a stumbling block—because canned sardines are brined and cooked, the nematode DNA was degraded, making it difficult to accurately sequence. Luckily, the rabbis had also brought along several pounds of fresh, uncooked capelin roe, so the researchers used the parasites in the roe to extract high-quality DNA.

But when Kvist and his colleagues started sequencing, they discovered that the database of the gene they were barcoding, cytochrome c oxidase subunit I (COI), was spotty for parasites, and the comparisons gave inconclusive results. So they also sequenced cytochrome c oxidase subunit II (COII), using universal and Anisakis-specific primers. Comparison with the more complete COII database showed that most nematodes found in the roe were indeed Anisakis larvae. This insight combined with the fact that the nematodes found in the fish were larval and therefore likely developed Anisakis-like outside of the gut, alleviated the rabbis’ worries that the sardines were rendered unkosher by the parasites.

This wasn’t the first time that OU turned to science to test food quality, says Goldberg. When high levels of tartaric acid in kosher pomegranate juice suggested the product had been adulterated with cheap grape juice, scientists were able to determine that it was actually made from pomegranates with higher levels of tartaric acid than most. But the sardines presented a unique problem. Unlike some contaminants that render food unkosher but are easily washed away, like bugs from fruit, the worms can’t be completely removed from the sardines. If the worms in the fish had not been kosher, explains Loike, kosher certification would not merely have been removed from certain brands: “we couldn’t certify any fish.”