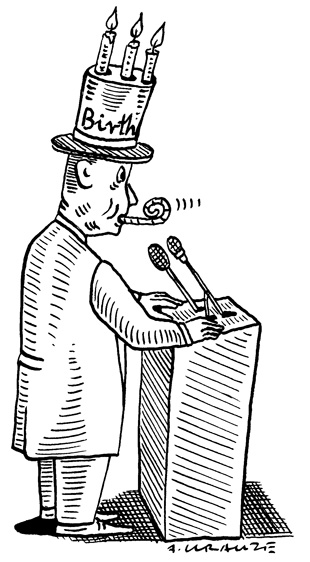 On Peter Hudson’s 50th birthday (May 22, 2003), 75 disease ecologists and evolutionary biologists from around the world gathered in his Pennsylvania backyard for a soccer game and barbecue. He had just been recruited to Penn State University from the University of Stirling in Scotland, and Penn State colleague Ottar Bjornstad decided that a conference focused on the ecology and evolution of infectious disease would be a great way to welcome Hudson to the faculty. “And having it around my birthday suddenly became the easy way to do it,” Hudson says.

So Bjornstad pitched it to the dean, who, eager to build the university’s infectious-disease program, gave the researchers the green light. But Bjornstad and Hudson didn’t want to merely throw a party; they wanted to create something new, something that would be valuable for the field, but fun and unique at the same time.

“The idea really is for people to interact,” Hudson says. “To have time to discuss things, time to joke, time to share a drink, time to just be relaxed and think about things.” Finally, on the last day of that first conference, everybody went on a hike though the woods “to try to mix people up to talk science,” Hudson says. “It was really good fun.”

In fact, the conference was such a success that its organizers decided to make it an annual affair—scheduled on or around Hudson’s birthday. Ten years later, the Ecology and Evolution of Infectious Disease (EEID) conference is still going strong. “I think it’s gotten to be known as the place to go if you’re interested in infectious disease,” says Cornell University marine disease ecologist Drew Harvell, an EEID regular since 2003.

The idea really is for people to interact. To have time to discuss things, time to joke, time to share a drink, time to just be relaxed and think about things.—­Peter Hudson, Penn State University

And though the conference has grown considerably—the University of Michigan, Ann Arbor, hosted 250 people in May 2012—the central goal has not changed: bringing together diverse scientists to have cutting-edge discussions on the ecology and evolution of disease.

“It was the first meeting of its kind, anywhere, that I can think of,” molecular evolutionary biologist Eddie Holmes said of the inaugural gathering, at which Hudson had invited him to speak as part of a successful ploy to recruit him to Penn State from Oxford University. Viral and bacterial evolution used to be studied largely independent of other disciplines, but around the time of the 2003 meeting, scientists were beginning to realize that there is actually a strong link between disease evolution, epidemiology, and ecology, says Holmes, who recently moved to the University of Sydney in Australia on a 5-year fellowship. “Pete was one of the first people to see that link . . . [and] the conference was the first to really bring that new understanding, this marriage of ecology and evolution, together.”

Another goal of the conference is to train the next generation of leaders in the field. To further that goal, some of the original conference organizers, led by ecologist and population geneticist Mike Antolin of Colorado State University, wrote up a successful proposal for the National Science Foundation that won them funding to preface future meetings with a workshop aimed at building basic quantitative skills in epidemiological and evolutionary modeling. “The informal collaborations [generated during the meetings] were great, but in terms of the students, we actually had the potential to really engage a whole cohort of the best and brightest in the world,” says Harvell, who helped submit the proposal. “I don’t even know where to begin to say how fantastic that program has been.”

Despite the conference’s growth and improvements over the years, it has still managed to keep its fun spirit, epitomized by the all-important romp in the woods. “The hike was a critical part, and remains a key part, of this meeting,” Harvell says. “It always makes everybody more approachable when they have their hiking boots on and they’re sweating on the trail.”

Next year, the conference comes back home to Penn State—just in time for Hudson’s 60th birthday. “I know what I’m doing for my birthday [every year], and I never spend my birthday with my family,” he says. “But I quite like it. And there’s never any question I’m going to the meeting, whatever happens.”