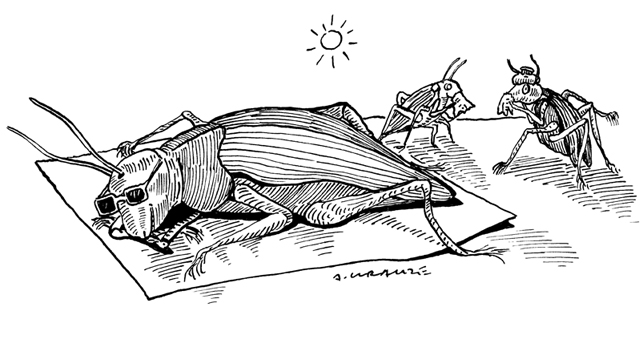 Evolutionary biologist Kenneth Fedorka wasn’t aiming to explore how cricket populations changed color in response to a warmer climate. But when the University of Central Florida researcher reared groups of crickets in his lab at higher temperatures, a change in one phenotypic trait stood out above the rest: they were a lighter shade of brown than crickets reared at cooler temperatures.

Fedorka had originally set out to understand how climate change could alter important milestones for crickets, such as whether their eggs develop or lie dormant. “It was only through happenstance that we noticed a difference in cuticle color in young adult crickets,” Fedorka says. “That got the gears turning about what other effects lighter cuticles could have.”

Crickets are far from the first insects that biologists have shown get lighter in warmer environments. Reports dating back to the 1930s described how beetles, flies, and butterflies living...

It’s pretty clear what insects gain by adjusting their melanin in different environments. In cold, dry climates, the pigment absorbs heat and keeps them from drying out, whereas in tropical areas it could put them at risk of overheating.

But Fedorka wondered whether making less melanin could actually harm insects by weakening their defenses. “I said, ‘Wait a minute, we know that melanin is part of the immune system, so the thermal environment could be shaping the immune system in maladaptive ways,’” he recalls.

Although melanin itself has antimicrobial activity and can encapsulate invading organisms in both the cuticle and within the body of insects, the real immune benefit probably comes from the biochemical production of the pigment. In response to infection or other stimuli, immune cells release an enzyme called phenoloxidase (PO), which triggers a molecular cascade that results both in compounds that have potent antimicrobial activity and in melanin, which darkens and strengthens the cuticle.

“Phenoloxidase is a workhorse that responds to viruses, bacteria, and multicellular organisms,” says Shelley Adamo, a professor of psychology and neuroscience at Dalhousie University in Nova Scotia. But there are many other immune mechanisms in insects, Adamo adds, including phagocytosis and antimicrobial peptides, which may also be important—or even more important—than the PO pathway for some pathogens.

If a warmer environment means less melanin, Fedorka had a hunch it could also mean a less active PO pathway. He incubated crickets during their nymphal stage, between the time they hatch and when they become adults, at typical summer and fall daytime temperatures (28.5 °C and 23.5 °C, respectively). During this developmental stage, the expression level of genes involved in melanizing the cuticle is established. As adults, the crickets reared in summer temperatures had lighter cuticles, as predicted, and also lower levels of PO activity in their blood. Most importantly, they paid an immune price by being more likely to die after infection with a common cricket bacterium, Serratia marcescens (J Exp Biol, 216:4005-10, 2013).

This study suggests that cold-reared crickets “heavily invested in melanin-producing infrastructure, so once they get the signal, ‘We are under attack,’ they already have a much larger standing army to keep the invader from getting out of hand,” Fedorka says. Although insects reared in the warm environment could probably ramp up PO activity, they might not be able to do so quickly enough to respond to invading pathogens, he adds.

To test whether temperature could affect the immune function of other insects, Fedorka’s group did a similar study in Drosophila. Flies reared at 28.5 °C were paler than those reared at 21.5 °C, and their immune response also paled in comparison. Pseudomonas aeruginosa infection killed 75 percent more warm temperature–reared flies (J Exp Biol, 217:3664-69, 2014).

The similar finding in the evolutionarily distant organisms raises the possibility that hotter weather could make many other insect species less able to fend off pathogens. Mosquitoes and honeybees, both of which have melanin and the PO pathway as part of their immune system repertoire, could become even better vectors of disease or less efficient pollinators, respectively. “If this is as widespread as we hypothesize it is, then we are talking about disruption of agricultural networks and human pathogen interactions,” Fedorka says.

One of Fedorka’s long-term goals is to rear mosquitoes in the lab for 25 generations, incubating each generation in a slightly warmer environment to mimic the postulated climb in average air temperature in Florida between now and 2100. He predicts that they will get lighter and have weaker immune systems—and, importantly, that such changes would allow the malaria parasite Plasmodium to replicate more efficiently.

According to Kristin Michel, an entomologist at Kansas State University, it will also be interesting to see how warmer temperatures affect the ability of mosquitoes to control bacterial and fungal infections. (Melanin is probably more important for combating these pathogens than it is for fighting protozoan parasites, she points out.) “[This] experiment will give an idea of how mosquitoes respond to infection, and if it kills them off, it could reverse some of the range expansion predicted for climate change,” Michel says.

However, before mosquitoes die off, there would be enormous selective pressure for them to compensate for the loss of PO activity, possibly by ramping up antimicrobial peptides or other unrelated immune activities, Michel says.

It is unclear at this point what the effect of the weakened PO activity in Fedorka’s crickets and flies could mean for a wide range of pathogens—and for insects in the wild. “When thinking about how temperature is going to affect a species of insect, you have to think about who its pathogens are and how they respond to increases in temperature,” Adamo says. For now, biologists generally expect that many pathogens will become more prevalent at higher temperatures, requiring insects to mount better, not weaker, immune responses.