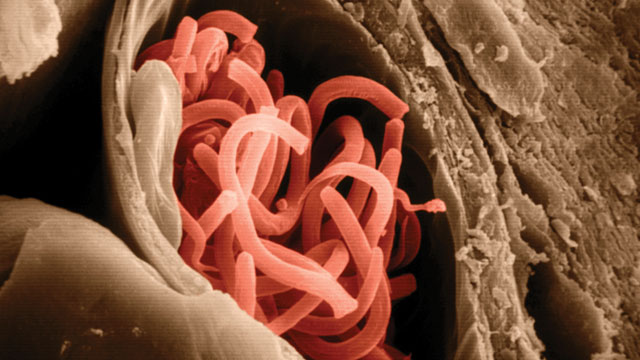 Unlike in Central and South America, where certain regional pockets of onchocerciasis had been conquered, Africa’s disease burden was deemed too massive, with 99 percent of the world’s 17.7 million annual cases occurring on that continent. Furthermore, it had taken a legion of health workers to make the substantial progress witnessed in Brazil, Colombia, Ecuador, Guatemala, Mexico, and Venezuela—resources that aren’t available in many African countries. 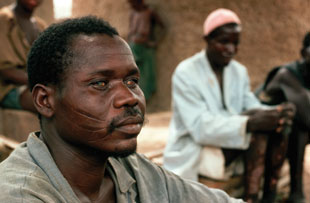 PARA-SIGHT-LESS: A victim of onchocerciasis, or river blindness© DAVID REED/CORBISThe nematode responsible for onchocerciasis, Onchocerca volvulus, is spread from person to person via black flies, which prefer breeding near rivers. The larvae worm their way underneath the skin all over the body, where they mature in skin nodules, mate, and produces thousands of new larvae every day. The human immune system’s response to dead and dying larvae causes itchy skin rashes. “Onchocerciasis doesn’t kill you like HIV, tuberculosis, or malaria, but instead you itch and itch day and night,” says Moses Katabarwa, senior epidemiologist at The Carter Center.

Onchocerciasis is the world’s second leading cause of infectious blindness—which occurs when the worm larvae die in the victim’s eyes.

In 1998, Katabarwa and his team embarked on a mission to the northern Sudanese town of Abu Hamad, where one out of three residents had the disease’s telltale skin lesions. The researchers saw similar rates in surrounding villages, with an affected region spanning about 1,500 square kilometers.

The area’s remoteness and high incidence of disease made it ideal for trying new eradication tactics. It was isolated by natural barriers on both sides—the coursing Nile River and the arid Sahara Desert—and the nearest area where river blindness was endemic lay more than 800 kilometers away. Thus the researchers could precisely measure the effect of treating Abu Hamad residents with little danger of the disease spilling over from another heavily affected area.

Rather than assemble a giant contingent of health-care workers, the experts relied on community leaders as their workforce. For a decade and a half trained villagers administered Mectizan, Merck’s formulation of ivermectin, a broad-spectrum antiparasitic drug that had been successfully used to fight river blindness in the Americas. Ivermectin targets the immature stages of the worms’ development, but not adults, which can live as long as 15 years in humans, making lax drug compliance a barrier to completely stopping transmission.

A major turning point for this campaign came in 2006 when Katabarwa’s team stepped up the frequency of treatments from a single annual dose to two per year, a daunting but ultimately surmountable burden for community volunteers. “Twice-a-year, community-directed treatment for 15 consecutive years was critical to achieving the interruption of transmission of river blindness in Abu Hamad,” says Kamal Binnawi, director of Sudan’s Onchocerciasis Elimination/Control Program at the Federal Ministry of Health in Khartoum.

By 2011, the grassroots campaign had reached more than 90 percent of the 120,000-plus people at risk for the disease, educating and empowering whole communities to take responsibility for drug compliance. “A community-based, community-directed treatment is the standard approach developed by the African Program for Onchocerciasis Control (APOC), and this work vindicates this approach,” says Gilbert Burnham, an international health professor at Johns Hopkins University who was not involved in the project.

In May 2013, Katabarwa and his collaborators provisionally announced the eradication of onchocerciasis in Abu Hamad in the American Journal of Tropical Medicine and Hygiene. “Our team will spend the next 3 years on surveillance for the region,” says Tarig Higazi, an Ohio University epidemiologist and first author on the study. The WHO will take another 5–6 years to certify the elimination of the disease, but the researchers are confident that it is gone.

In 2011, Higazi and his colleagues screened blood samples from more than 6,000 Abu Hamad school children for Ov16 antibodies, the main blood marker for onchocerciasis. They all came back negative. Entomological analysis over 12 months failed to detect a single worm in 17,000 black flies, even during their peak season from November to May when they like to feed on humans. “And business is booming,” says Katabarwa, referring to the region’s renewed agricultural productivity, as disease-free farmers now have more time to spend on their harvests.

This initiative could serve as an inexpensive, sustainable model for other areas of Africa where onchocerciasis is endemic, although questions remain. Community-based programs require a large time commitment from villagers, and can negatively impact productivity and subsistence farming at first.

Following the success at Abu Hamad, Binnawi says semiannual treatment programs are being implemented in parts of eastern Sudan where onchocerciasis is endemic. Disease control efforts in southern Sudan, where the disease is most severe, were largely stymied by recent violent conflicts.

Government-led control efforts have recommenced in war-torn regions that have remained part of Sudan, while the WHO’s APOC is aiding the new Republic of South Sudan. With the help of Merck, whose Mectizan donation program celebrated its 25-year anniversary in 2012, onchocerciasis researchers across the world are hopeful about the future. “The ambition to eliminate river blindness altogether is the vision and the mission of a lot of dedicated partners all over the globe,” Binnawi says.