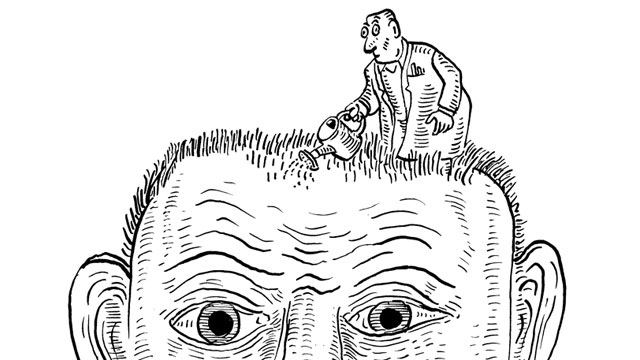 ANDRZEJ KRAUZEFor some men, few things are more worrisome than the daily sight of an ever-receding hairline in the bathroom mirror, or the peach-fuzz feel of a thinning crown. This creeping nemesis—known as male-pattern baldness or androgenetic alopecia—emerges in genetically predisposed individuals when a by-product of testosterone called dihydrotestosterone (DHT) causes hair follicles on the scalp to shrink, producing ever thinner hairs, until the follicles eventually lose the capacity to produce hair that protrudes above the surface of the skin.

For the moment, there are few treatment options. The only two approved by the US Food and Drug Administration are minoxidil (Rogaine), a vasodilator thought to prevent or slow follicle miniaturization by increasing nutrient supply, and finasteride (Propecia), which achieves the same goals by blocking the conversion of testosterone into DHT. Research has shown that both can prevent or slow hair loss, and sometimes induce regrowth, by rescuing...

The ultimate victory, when it comes to the long-fought battle against baldness, would be to find a way to trick the body into creating brand-new hair follicles.

Researchers first raised the possibility in the 1950s, when they observed new hair follicles forming during wound healing in rabbits and mice, but the work was later discredited. Then, in 2007, George Cotsarelis, a dermatologist at the University of Pennsylvania’s Perelman School of Medicine, spotted hairs growing in the middle of small cuts they’d made in the skin of adult mice. “We figured out they were de novo hair follicles formed in a process that looked a lot like embryogenesis,” says Cotsarelis.

It turns out that the wound-healing process causes skin cells to dedifferentiate, providing a limited time window during which those cells can be persuaded to form new hair follicles. Even more intriguingly, the researchers also found that inhibiting Wnt signaling during this window reduced follicle neogenesis, while overexpressing Wnt molecules in the skin increased the number of new follicles (Nature, 447:316-20, 2007). Cotsarelis and his colleagues had discovered a potential way to generate new hair follicles.

PureTech Ventures, a Boston-based venture capital group, snapped up the research even before the paper had come out. PureTech’s Daphne Zohar, David Steinberg, and Bernat Olle had previously recruited Cotsarelis to help explore commercial opportunities arising from dermatological research. Having evaluated hundreds of existing patents without finding anything to form a company around, Cotsarelis began to reveal the molecular machinery behind follicular regeneration in mice—a finding with obvious commercial potential. “I thought, gee, this is perfect for PureTech,” he recalls. In 2006, Cotsarelis, Zohar, Steinberg, Olle, and several other scientists cofounded a company called Follica to develop new combination therapies to induce follicle neogenesis.

Although Follica has released few details on their proprietary procedure, the general idea is clear: their patented minimally invasive “skin perturbation” device removes the top layers of skin, causing the underlying skin cells to revert to a stem-like state, after which a molecule is applied topically to direct the formation of new hair follicles.

Indeed, Follica has already done preclinical and clinical trials, says Olle, “all of which confirm that we can consistently create new hair follicles in mice and in humans. As far as I know, no other approach has been able to achieve that.”

News of the progress has attracted strong interest from the public, with comments piling up below online articles about Follica and serving as de facto message boards for the science-savvy bald community to exchange expressions of hope and skepticism—and to speculate about when the “cure” might hit the market. Earlier this year, Cotsarelis’s group sparked another comment frenzy by demonstrating that a protein called fibroblast growth factor 9 (Fgf9), which is secreted by gamma delta (γδ) T cells in the dermis, plays a key role in the formation of new follicles during wound healing in adult mice.

Very little is known about the mechanism of hair follicle neogenesis besides the Wnt family, so the discovery
of Fgf9 was very important.

When Cotsarelis and his collaborators inhibited Fgf9, fewer new follicles formed compared to controls. And when the researchers induced overexpression of Fgf9, new follicle formation increased 2–3-fold compared with normal expression. That’s because Fgf9 initiates a feedback loop in wound fibroblasts that amplifies the signaling factors required for follicle neogenesis, explains Cotsarelis. Importantly, even when the researchers added Fgf9 to wounds in knockout mice engineered to lack γδ T cells (which are rare in humans), they observed increased Fgf9 expression in fibroblasts—and hair regeneration (Nature Medicine, 19:916-23, 2013).

“Very little is known about the mechanism of hair follicle neogenesis besides the Wnt family, so the discovery of Fgf9 was very important,” says Luis Garza, a dermatologist at Johns Hopkins School of Medicine who has previously collaborated with Cotsarelis but was not involved in this research. “There are probably a whole panoply of agents which control regeneration,” but this study demonstrates Fgf9’s potential as a baldness therapy.

The next step is to test the effects of Fgf9 on human skin in xenograft models and then in the clinic. “If results hold up in humans, we could expect a several-fold increase in new follicles beyond what we were already accomplishing,” says Olle.

There is a long way to go, of course, and Garza points out that “there are myriad questions regarding moving Fgf9 to human use.” But the recent advances by Cotsarelis and Follica are raising fresh shoots of hope for people who are losing or have already lost their hair. For Cotsarelis, that means more e-mails from interested members of the public, something he’s gotten used to over the last 5 years.

“I’ve learned to accept that I’m the baldness guy,” he says. “Everybody asks about it, but I don’t get sick of it. It’s nice to work in an area that people care about.”