When Kīlauea volcano on the Big Island of Hawaii began spewing tons of molten lava into the ocean in May 2018, microbial oceanographers Dave Karl of the University of Hawai'i and Ricardo Letelier of Oregon State University started to wonder what effects it was having on the nearshore marine ecosystem. Certain nutrients in volcanic ash and lava are known to support phytoplankton growth, so the pair figured that new life might sprout up around Kīlauea as a result of the eruption.

Letelier, who studies marine microorganisms’ responses to environmental disturbance, is used to monitoring satellite data for patches of chlorophyll that could suggest the presence of phytoplankton. After speaking with Karl, he began pulling satellite images showing lava entering the water around Kīlauea. “Very, very soon, we started seeing the evolution of a long, long filament that seemed to be chlorophyll,” Letelier recalls.

Chlorophyll plumes a couple of miles long and a mile wide often form along shorelines when water sweeps coastal nutrients into the ocean. But this plume “was over one hundred miles in length and . . . about fifteen to twenty miles wide, and it was extending straight out into the ocean,” says Sam Wilson, an oceanographer at the University of Hawai'i (UH) who works with Karl. “It was much bigger than anything we’d previously observed . . . and it was much more prominent.” Clearly, this wasn’t a normal near-shore bloom. The researchers decided they needed to send a team to Hawaii to figure out what was going on.

Wilson speedily rounded up 17 other scientists while Kīlauea continued pouring 50 to 100 cubic meters of lava into the ocean every second. “We had to mobilize quickly, within about a two-week period,” he says. On Friday, July 13, the team boarded an early-morning flight from Honolulu to Hilo to meet UH’s now-retired research vessel, informally known as the KOK (Ka`imikai-O-Kanaloa), waiting to take them out to Kīlauea.

The ship left port at 8:00 a.m., and just before noon, the scientists saw the first sign of the erupting volcano: lava-induced haze, or laze, billowing above the Big Island’s eastern point, Cape Kumukahi. “Once [we] could see that, we got very excited,” Wilson says. “When we got closer, we could see the water discoloration simply from standing on the deck of the ship and looking over the side. That’s when we really knew that we were in lava-impacted water.”

Over the next 12 hours scientists frantically collected water samples as efficiently as possible. They deployed a rosette of 10-liter bottles to capture samples at
various depths, and took breaks over the next four days only for occasional sleep and to cruise to new sampling sites. Letelier, who was monitoring satellite data from his office back in Oregon, helped steer the expedition to patches of ocean that seemed rich in different types of phytoplankton.

Based on the colors he’d seen in the satellite images, Letelier anticipated that some areas of the chlorophyll plume would be dominated by diatoms, while others would contain mostly green flagellates such as Phaeocystis and other genera. He directed the team aboard the KOK to sample multiple regions, and analyses done both on the ship and back at researchers’ home labs soon showed he was right. The researchers also identified other, less abundant groups, confirming the presence of a massive phytoplankton bloom apparently triggered by the eruption.

“As far as I know . . . the idea that volcanic lava could influence phytoplankton blooms was completely new,” says Columbia University biological oceanographer Hugh Ducklow, who was not involved in the work and coauthored an accompanying perspective article in Science. “There had been work on the chemistry and physics when all that hot lava goes into the ocean, but actual influences on the biology were not considered.” 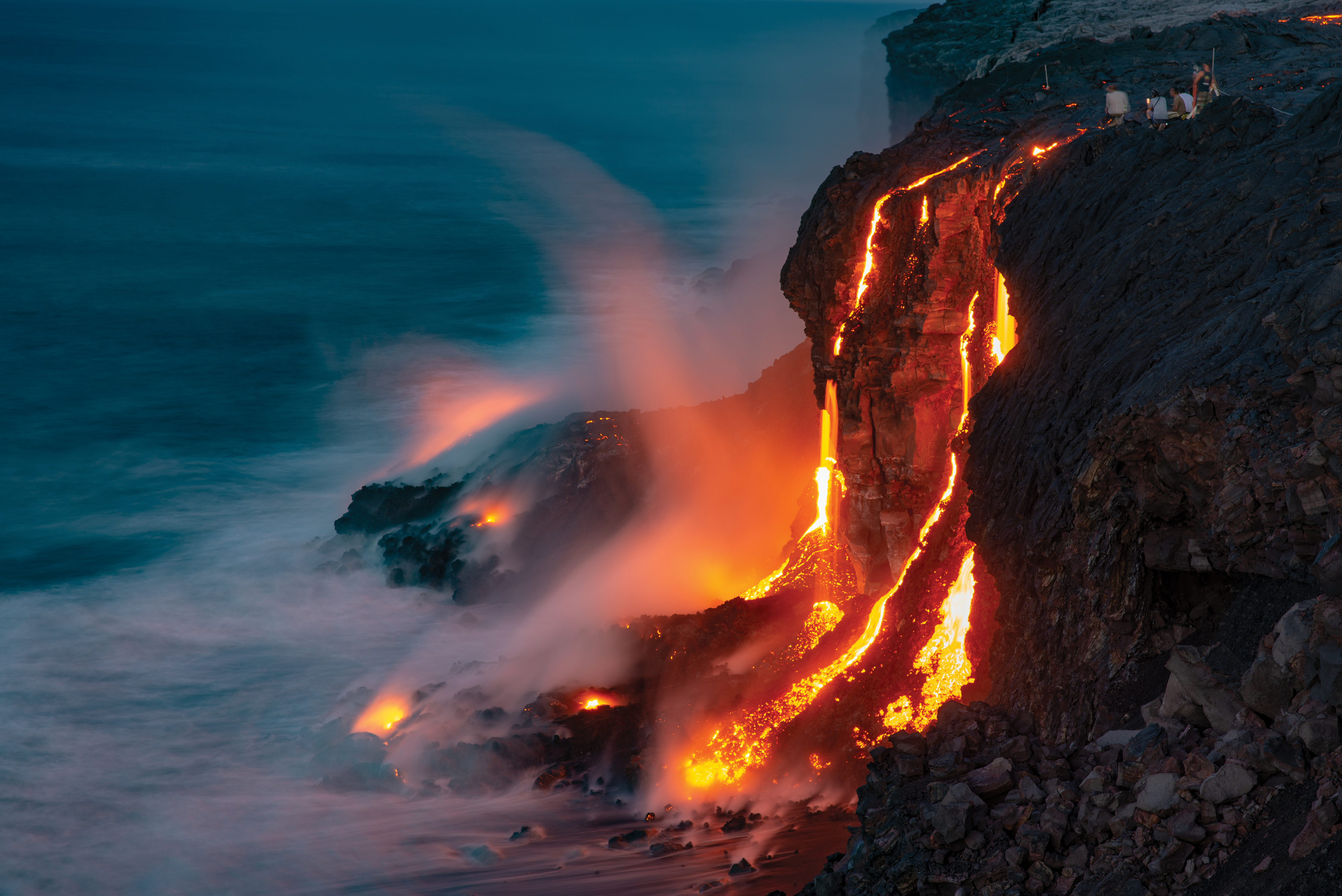 At first, though, the results didn’t seem to jibe with Letelier’s and Karl’s previous predictions. Ten years earlier, the two had published a hypothesis that an influx of iron and phosphorus would set the stage for a bloom of nitrogen-fixing organisms. Because Kīlauea lava is rich in these elements, the eruption had seemed like the perfect natural experiment to test the idea—and the fact that a bloom had formed initially seemed to support their theory. But it turned out that the phytoplankton they’d found weren’t nitrogen fixers at all. On the contrary, the microorganisms were usually found in environments where bioavailable nitrogen is plentiful.

Chemical analyses showed that the water around Hawaii’s Big Island did contain high concentrations of usable nitrogen in compounds such as nitrates to feed these microbes, but the lava itself was poor in such nutrients. It seemed that the researchers were missing something. “When you’re on board, it’s hard to think straight,” Wilson says. “You’re so tired, sometimes you’re sick, sometimes you’re trying to coordinate eighteen scientists—logical and clear thinking is real tough to do. But . . . when we returned to land and caught up on sleep, we had a number of possibilities.”

High nitrate levels could have been the result of chemical fixation, if the lava was hot enough to split dinitrogen molecules (N2) in the water. But the team soon homed in on another possibility: that nitrates were coming from an upwelling of nutrient-rich waters deep in the Pacific. According to this hypothesis, hot lava that’s sunk to the seafloor heats deep, nutrient-filled water, causing it to rise. Meanwhile, underwater explosions caused by lava cooling further mix up different layers of ocean water, allowing more nutrients to come to the surface.

This idea was supported by measurements of the water’s oxygen concentrations and nitrate isotopes, which revealed levels more like those in deep water than those in normal surface water. And that September, when the eruption had died down, a Woods Hole Oceanographic Institution submersible identified lava 700 meters deep in the sea around Kīlauea, Wilson adds. “That was proof that lava had accessed these nutrient-rich deeper waters.”

The findings suggest that the lava is not directly responsible for the phytoplankton bloom; it merely set the stage, says Pierre Delmelle, a geochemist at Université Catholique de Louvain in Belgium who was not involved in the study. “It’s really this physical effect of upwelling generated by the heat. . . . This is the first study that documents this.” He adds that Letelier and his team carried out the study thoroughly and carefully, so their speculation that past influxes of lava into the ocean could have similarly altered local biology sounds reasonable. “It’s something we’ve never thought about.”

Letelier says he still thinks that his and Karl’s hypothesis that iron and phosphorus deposition could promote the growth of nitrogen-fixing bacteria is a sensible one. The lava-affected waters around Kīlauea just had a different chemistry than they had anticipated, he says. “We did not consider that, while volcanic ashes being deposited are cold, the lava entering the ocean is very hot.” In addition to triggering deep-water upwelling, he notes, the heat kickstarted chemical reactions that depleted the water of incoming lava-borne phosphorus.

But on the other side of the Hawaiian Islands, ash, rather than lava, was blanketing the ocean, and satellite images revealed widespread increases in chlorophyll. With the ash’s iron and phosphorus, and without the influx of lava sapping phosphorus out of the water, Letelier speculates, “that region could be a region where nitrogen fixation is becoming active.”