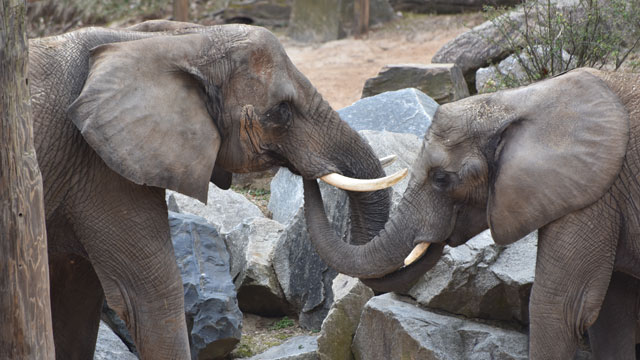 In late February 2013, Mike McClure and the rest of the elephant team at the Maryland Zoo in Baltimore grew concerned about their calf, Samson. It was hard to pinpoint, but having raised the almost 5-year-old African elephant calf since birth, McClure knew something was wrong. “I looked at him and just noticed his behavior was off,” he recalls. Maryland Zoo head veterinarian Ellen Bronson agrees: “He was just very slightly not himself.”

The team sent blood samples out for analysis, and after a few inconclusive tests, a positive result confirmed their worst fears: Samson was infected with elephant endotheliotropic herpesvirus (EEHV), a virus commonly carried by adult elephants that can be deadly when acquired by a calf. “[The diagnosis] was devastating,” McClure recalls....

Researchers first discovered EEHV in 1995, after a 16-month-old Asian elephant calf named Kumari at the Smithsonian National Zoological Park in Washington, DC, suddenly fell ill and died in a matter of days. Zoo pathologists Laura Richman and Richard Montali performed a necropsy of the young elephant and found significant amounts of hemorrhaging, especially in the capillaries of the heart, liver, and tongue. They also saw signs of inclusion bodies, protein aggregates characteristic of herpesvirus infections in other species, including humans. And then, late one night while peering through an electron microscope, Richman saw the telltale dark shape of a herpesvirus in Kumari’s cells. PCR amplification and comparison to a DNA database eventually confirmed the diagnosis. Under the direction of Gary Hayward at Johns Hopkins University, Richman studied the virus, which she dubbed EEHV1, for her PhD project. EEHV1 primarily infects Asian elephant calves, but in the course of her research, Richman also identified a second type of the virus, EEHV2, which primarily affects African elephants.

Richman and her colleagues developed PCR-based diagnostic tests for EEHV1 and EEHV2, and in the mid-2000s, the National Zoo began doing regular screenings of its own elephants. The lab also began testing samples sent in from zoos and circuses around the country. In 2007, for example, when a 6-year-old Asian elephant named Hansa at Woodland Park Zoo in Seattle started acting a bit lethargic, its keepers sent samples to National Zoo researcher Erin Latimer for analysis. Despite the keepers’ suspicions that Hansa was suffering from an EEHV infection, the tests returned no sign of EEHV1 or EEHV2. Unfortunately, Hansa continued to decline, growing increasingly lethargic and refusing to eat. Within a week, the young elephant was dead.

The necropsy revealed characteristic inclusion bodies, suggesting that it was indeed a herpesvirus that had killed Hansa. But it clearly wasn’t one of the two known types. Latimer, in collaboration with Hayward at Johns Hopkins and colleagues, then tested Hansa’s samples with degenerate PCR primers that aren’t specific to EEHV1 or EEHV2, instead binding to a broad array of herpesviruses. Sure enough, there was a different EEHV type, now called EEHV3, lurking in Hansa’s tissues and blood. The researchers used the primers to test an older case in which a young Asian elephant had died after testing negative for EEHV1 and EEHV2. In those samples, they identified what is now EEHV4. “So by using degenerate primers we picked up two new EEHVs,” Latimer says. And over the next few years, researchers would also identify at least three other EEHV types. “Every couple of years there’s been a new one,” Latimer says.

In an extensive survey of EEHV published in two papers late last year, Richman, Hayward, Latimer, and colleagues used DNA fingerprinting to compare known cases, confirming seven different types of the virus (J Virol, 88:13523-46 and 13547-69, 2014). “EEHV1–EEHV7 types are not just strains but distinct species that evolved separately tens of millions of years ago,” Hayward tells The Scientist in an e-mail. “Each of them also has multiple subtypes and then also numerous easily distinguished strains that are amazingly diverged—the most we have ever seen in any herpesvirus.”

The viruses are not limited to captive elephants; they also infect wild herds. Hayward’s team examined benign lung nodules from wild elephants and confirmed that the viruses are natural pathogens of the giant mammals, which likely contract the virus as young elephants, then carry latent infections for the rest of their lives. Hayward speculates that perhaps elephants are more likely to survive a primary infection if they are still armed with maternal antibodies, acquired both across the placenta and from their mothers’ milk. But in wild herds, which are increasingly fragmented due to habitat destruction, or captive elephants, in which group interactions may be disrupted, young calves may be exposed to the virus when they are least equipped to deal with it.

Fortunately, US zoos are getting a handle on EEHV. Between 1978 and 2008, the disease killed nearly 20 percent of U.S.-born Asian elephant calves, Hayward told The Scientist. But thanks to increased surveillance—every week Latimer runs tests on samples from several calves around the country—and immediate supportive care, only one captive elephant in the U.S. has died of an EEHV infection since. The Maryland Zoo’s Samson is now one of at least a dozen EEHV success stories.

Even before the positive EEHV result returned, McClure and his colleagues started Samson on a heavy course of antiviral medications (in the course of his treatment, the young elephant downed more than 2,500 antiviral pills), injected him with anti-inflammatory drugs, and began hydration therapy. Each day, Samson would drink between 15 and 25 gallons of Gatorade-spiked water, and his keepers would deliver many more gallons of fluids rectally. It was touch and go for a while, but after about a week and a half the staff finally noticed significant improvements in Samson’s behavior.

“When you have elephants, you’re prepared for this disease,” says Bronson, who notes that captive elephants in the U.S. are now routinely trained from birth to accept the fluids, meds, and exams needed to monitor for and treat EEHV. “All these things we needed to save [Samson’s] life started literally the day he was born.”

Update (June 4): After this story went to press, news broke of the death of Daizy, a five-year-old Asian elephant at the Albuquerque BioPark. This marks the second EEHV-caused mortality in the U.S. since 2008.