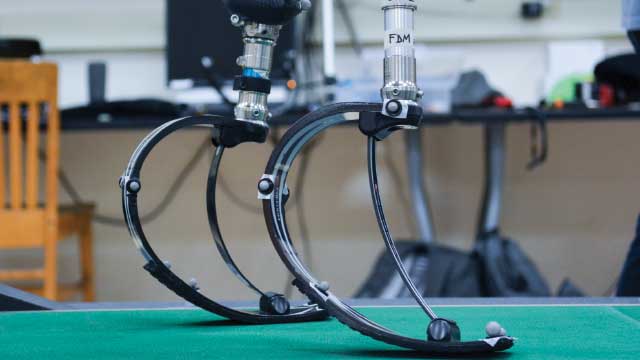 BLADE RUNNER: A pair of the prosthetic devices that Alena Grabowski tested in her University of Colorado Boulder labPATRICK CAMPBELL, UNIVERSITY OF COLORADO

Oscar Pistorius, a South African sprinter dubbed the “Blade Runner,” made history in 2012 when he became the first double amputee to participate in the Olympics, running the 400-meter dash. Pistorius had been barred from the 2008 competition by the International Association of Athletics Federations (IAAF) after researchers in Germany reported that his prosthetic limbs provided an advantage over the legs of an able-bodied athlete (Sport Technology, 1:220-27, 2008). However, the IAAF reversed its decision after a team of researchers in the U.S. conducted a follow-up study that incorporated several additional parameters and concluded that Pistorius’s artificial limbs, though mechanically different, were physiologically similar to biological ones (J Appl Physiol, 107:903-11, 2009).

Although the second study ultimately allowed Pistorius to compete...

“[After] doing some research on [Pistorius], I had a bunch of other questions about prostheses and what they’re capable of and not capable of,” says Alena Grabowski, a physiology and biomechanics professor at the University of Colorado Boulder and one of the authors of the second Pistorius study who said there was insufficient evidence to claim a prosthetic advantage. “That propelled me to this bigger research idea of trying to figure out how prostheses function.”

Grabowski is currently part of a group of researchers investigating how adjusting various parameters of these devices affects athletic performance. In its latest study, the research team assessed five athletes with double transtibial (below-the-knee) amputations as they ran on a specialized treadmill. Each participant performed multiple trials with three different prosthetic models that were adjusted to various lengths and levels of stiffness.

“One of the major challenges of biomechanical studies related to the effects of prosthetic components is sufficiently powering the study,” David Morgenroth, a professor of rehabilitation medicine at the University of Washington who did not take part in the work, writes in an email to The Scientist. “Although the small number of participants in this study may be seen as a weakness, relative to other published studies of running-specific prostheses in participants with bilateral amputations, this study has a larger number of participants.”

By analyzing these five individuals, the team discovered that, contrary to what many believe, the vertical length of the prosthesis did not have a significant overall effect on key factors associated with running speed (Interface, 14:20170230, 2017). “There are two schools of thought,” says study coauthor Paolo Taboga, a prosthetics researcher at California State University, Sacramento. One, he explains, posits that having taller legs means taking longer steps, which, in theory, could help you run faster. On the other hand, some believe that having a longer leg may make it harder to swing that leg, resulting in fewer steps.

It turns out that “both views are true,” Taboga says. “You can take longer steps, but it takes a bit longer to take those steps—so in the end, the two effects counter-balance each other.”

Is there a day that will come where we can create a prosthesis that’s better than flesh and blood? We’re not there yet, but I hope that day comes.—Alena Grabowski
University of Colorado Boulder

Even among athletes with amputations, prosthetic length has been a point of contention. In fact, Pistorius himself accused another double amputee Paralympian, the Brazilian runner Alan Oliveira, of artificially increasing his height with longer prostheses to improve performance. And although the International Paralympic Committee has a formula to determine maximum standing heights, “it’s really hard and controversial to try to figure out what [the ideal] height would be,” Grabowski says. She adds that this is due to the fact that many of these amputations are the result of congenital conditions (being born without certain bones, for example) and that these individuals may have different arm or femur lengths compared to an average nonamputee.

Other aspects of prostheses need to be taken into consideration as well. For example, in the same study, Grabowski and colleagues found that another measure, stiffness, did influence two factors associated with higher sprinting speeds. Increased stiffness improved the athletes’ ability to generate large forces on the ground while decreasing the amount of time they spent on its surface. This effect, however, became less pronounced at higher speeds.

Now, the team is assessing whether length and stiffness can actually influence an athlete’s maximum running speed. Although the results are not yet published, Grabowski says that their preliminary analyses suggest that neither measure has a significant effect.

“I think [this research] really is a tremendous contribution—they were able to address many of the hypotheses that were out there about how these devices should impact performance,” says Craig McGowan, a biomechanics professor at the University of Idaho who wasn’t involved in the work but has collaborated with the authors in the past. However, he adds, “I think the debates [about performance] won’t go away anytime soon.”

adds that to thoroughly assess whether prostheses provide an advantage over natural limbs, “it is important to consider key disadvantages that sprinters and runners with amputations face, such as the potential for substantial discomfort, energy loss at the residual limb-socket interface, and limitations in ankle push-off power during acceleration.”

Although more research is needed to settle disputes about the advantages or disadvantages athletes with amputations may possess, research has already resulted in changes on the track. For example, Grabowski says that the studies from her lab have helped inform the National Collegiate Athletic Association’s (NCAA) decision to include athletes with amputations in track and field competitions with able-bodied individuals.

For now, one of the goals of Grabowski’s research team is to use this work to help improve the process of providing prosthetic prescriptions that match athletes’ abilities and their choice of sport. For example, while a sprinter might choose a stiffer prosthetic, distance runners tend to prefer softer ones, Taboga says. In another study (J Appl Physiol, 122:976-84, 2017), “we actually saw that decreasing stiffness allows you to run easier, [because] you consume less energy,” he adds.

In addition to helping athletes, the researchers also hope to use these findings to build better prosthetics for everyday life. “[By] understanding some of the aspects that help with performance in a prosthesis, can we create something even better?” Grabowski asks. “Or is there a day that will come where we can create a prosthesis that’s better than flesh and blood? We’re not there yet, [but] I hope that day comes.”