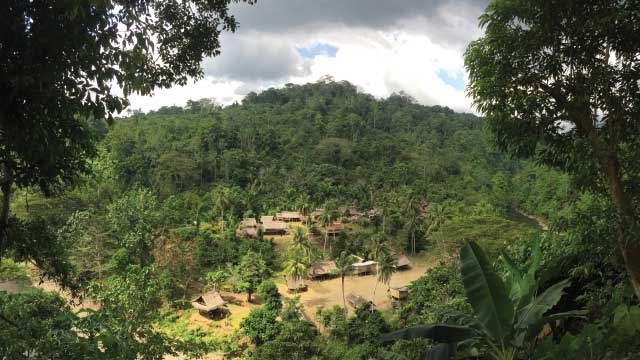 In the rainforests of Papua New Guinea, sound is everywhere. Birds of paradise sing amid the canopy, mammals rustle along the forest floor, and frogs call to each other from their perches. Over everything, the insects’ incessant buzzing creates a noise that fills any remaining gaps.

This natural orchestra is what Eddie Game and his team are there to capture. By continuously recording sounds across a wide range of frequencies, Game—a researcher with The Nature Conservancy—gathers information about the different soundscapes in the extraordinarily biodiverse Adelbert Mountains.

Papua New Guinea lies on the eastern half of New Guinea, an island that harbors at least 5 percent of the world’s animal and plant diversity. But more than 90 percent of the country’s land is privately owned by traditional groups, such as clans...

Even subtle differences in habitat health are reflected in sound.—Bryan Pijanowski,
Purdue University

The Nature Conservancy began helping villagers in Papua New Guinea manage their land 15 years ago. Communities carefully zoned gardens and hunting grounds, setting other areas aside for conservation. The borders were religiously monitored by local rangers. “I’ve never worked anywhere where the connection to nature is stronger than it is in Melanesia,” says Game. “They have a phenomenal desire to pass on the same natural heritage to their next generation.”

Game and his colleagues heard from locals that the conservation zones were benefiting wildlife, but they didn’t have a wide-scale monitoring program in place to quantify the improvements. “We needed some more-rigorous evidence that a small conservation area inside someone’s tenure will actually work to sustain biodiversity,” says Game. “If it doesn’t, then we need to rethink how we ask communities to work together or whether community-by-community land-use planning is adequate.” But fieldwork in Papua New Guinea is arduous, and the animal and plant diversity makes it almost impossible to catalog organisms by species. Game needed an efficient way to analyze ecosystem health in wide swaths of land. Previous work by Australian and French researchers led him to bioacoustics—and Game enlisted a team to listen to the rainforest. 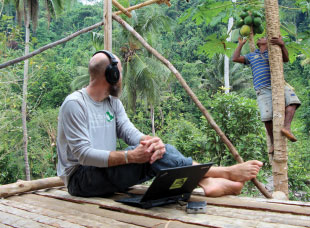 TUNING IN: In a Papua New Guinea forest, The Nature Conservancy’s Eddie Game listens to audio in his perch among some papayas.© JUSTIN E. HAUSHEER/TNCBioacoustics as a tool has historically been used to keep track of individual species, but recently, researchers have started recording sound to assess soundscape ecology in its entirety. In a diverse ecosystem, communication by animals of all shapes and sizes fills the full range of sound. Mammals tend to monopolize the low end of the frequency spectrum; birds call at higher pitches; and insects create sound at frequencies higher still. As an area becomes degraded and species groups drop out, the soundscape mirrors the changes. “Even subtle differences in habitat health are reflected in sound,” says Bryan Pijanowski, a landscape ecologist at Purdue University who uses bioacoustics to assess ecosystems. “We can tie that directly back to other factors that we are measuring, including vegetation structure.”

To analyze long and complex recordings and relate them to other factors, analysts develop “acoustic indices,” statistics that summarize the structure and distribution of sound in a recording. Indices depend on the frequency, amplitude, and timing of different sounds to quantify the richness or irregularity of the soundscape. They allow researchers to see how much sound is happening at different times and at what frequencies or intensities—without needing species identification to compare different areas. “We’re in the big-data era right now,” says Pijanowski. “It’s allowed us to think very broadly about how we can analyze sound signals across large spatial scales over a long time.”

Game and two colleagues, Princeton postdoc Zuzana Burivalova and Nature Conservancy geographer Timothy Boucher, hoped to record and analyze those differences in Papua New Guinea to determine the impact of the conservation zones. Using larger conservation areas as a baseline for sound complexity, Burivalova asks, “If you set aside a little piece of forest for conservation, how big does that forest have to be to be viable?”

Getting to Papua New Guinea to answer that question is relatively straightforward. Planes fly from Brisbane, Australia, to Port Moresby, the capital of Papua New Guinea. From there, a traveler can hop a flight to Madang on the country’s northern coast. But traveling to the remote mountain villages is another story. Game’s team drove for a few hours along the coast, and then loaded their packs in preparation for the two-day trek to their first community. “One by one, up and down the slopes, crossing little streams without bridges,” Burivalova recalls.

When they finally arrived, women gave the researchers flower necklaces as other locals performed a welcoming ceremony. Each morning, the team hiked out to deploy the small grey boxes that held their recording devices. “We just constantly had wet shoes,” says Burivalova. Local rangers guided the researchers, hacking away at the undergrowth with bush knives to make the trails easier to follow. In each zone, the team strapped two recorders to neighboring trees: one for the acoustic sounds a human might typically hear, and another to pick up ultrasonic noises made by bats or amphibians. In most zones, Game and his team set up the paired recorders at only one site near the center of the area to measure biodiversity, but they added more recording sites for the largest zones. The recorders stayed out for three days to collect an uninterrupted 24 hours of usable data each, provided no tree rats ate the microphones’ foam tips.

The team set up five sites per day while rangers collected recorders that had been previously deployed. After work, they typically ate a meal of corned beef, mackerel, rice, and noodles, and curled up under their mosquito netting in a nearby hut to prepare for the next day—sometimes with unwelcome visitors. Burivalova recalls the hapless cockroaches that would find their way inside her netting, climb to the top, and then inevitably fall on her in the middle of the night. “It’s not a nice way to wake up.”

After two weeks in Papua New Guinea, the team is now deciphering the vast amounts of data they collected. “A lot of people think it’s wonderful to put a recorder out there and record 10 days continuously, but then they have to find people to analyze it,” says Stuart Gage, a computational ecologist and bioacoustics researcher at Michigan State University who advised Game early in the project’s development.

A group of computer scientists from the Queensland University of Technology in Brisbane, Australia, has compiled Game’s recordings into manageable indices to show the soundscape’s diversity. Burivalova, back at Princeton, spends much of her days comparing various ecological variables to the acoustic patterns she sees. The results will help The Nature Conservancy determine if the conservation areas are working in a quantifiable way, as well as whether acoustic data are valuable for planning land management. “When you put your headphones on and listen, especially if you’re seeing it on a graph in front of you, it’s amazing how much you hear,” says Game. “You come back and say, ‘I didn’t remember it sounding like that at all.’ It blew me away.”