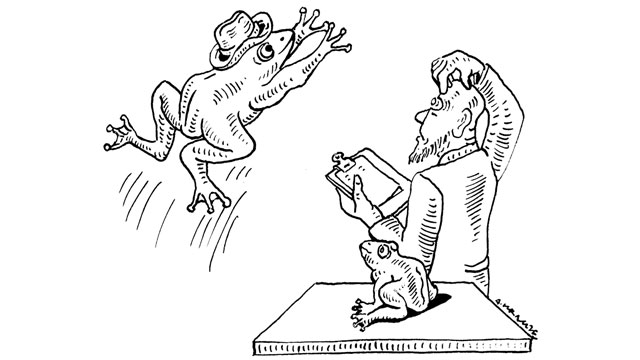 While perusing the Guinness Book of World Records with his son a few years ago, biomechanics researcher Thomas Roberts of Brown University stumbled upon an entry regarding Rosie the Ribeter [sic], a competitor in the 1986 Calaveras County Jumping Frog Jubilee. That year, Rosie, a bullfrog (Lithobates catesbeiana), leapt 6.55 meters (21 feet, 5.75 inches) in a three-jump series, averaging 2.18 meters per jump. Not only did the impressive leaps constitute a world record, they obliterated the official upper limit of bullfrog jump length, or maximal performance, published in the scientific literature (usually around 1 m or less, with one report of 1.3 m), and the comparable data Roberts and his students were collecting in his lab.

“When we saw this record in the Guinness Book of World Records, that seriously called into the question whether those maximal estimates were right,” says...

Because frogs are often used as model physiological systems for muscle performance in other species, including humans, the researchers were anxious to get to the root of the discrepancy. Roberts and his lab mates figured that the most logical way to test the validity of the frogs jumping in the Calaveras County Jumping Frog Jubilee, immortalized in Mark Twain’s 1867 short story, was to go to the fair and watch for themselves.

It was a traditional county fair, with funnel cakes, thrill rides, and livestock shows, Astley recalls. But the main event, of course, was the frog-jumping contest. “There’s a lot of competitiveness around it,” he says. “There are these professional frog-jumping teams, who keep their methods secret from the other teams and have special frog sources, places in the wild that they go to collect them.” Then there are the “amateurs,” participating visitors who rent a frog from the fair organizers.

For four days, Roberts and his team videotaped the jumping frogs, accumulating more than 20 hours of footage. Although the time-consuming process of extracting data from those recordings and analyzing the results still lay ahead, Astley says that it was clear pretty early on that these frogs were outjumping the frogs they kept in the lab. “Relatively soon in the competition [the fair officials] actually put down a tape mark at about 14 or 15 feet” to delineate a minimum distance frogs must jump to even have a chance of making the finals,” he says. “A 15-ft distance would be three 5-ft [more than 1.5-m] jumps—minimum. So that right there shows that it’s just a tremendous jump distance.”

Sure enough, their analysis revealed that 58 percent of the 3,124 jumps they quantified exceeded the 1.3-m maximum jump distance reported in the literature. The frogs at the fair jumped as far as 2.2 m in a single bound. In addition to casting doubt on previously published estimates of maximal bullfrog jump performance, the findings support the idea that the leg muscle itself is not sufficient to generate the power needed for such long leaps. Like other frog species, bullfrogs may have elastic tendons that work in a stretch-recoil fashion. “[Previously measured] jumps weren’t far enough to need a catapult mechanism,” Astley explains.

Fifty-eight percent of the 3,124 jumps they quantified exceeded the 1.3-m maximum jump distance reported
in the literature.

The results are striking, and it’s hard to argue with a data set the size of the one Astley and the others compiled at the fair, notes animal physiological ecologist Stephen Adolph of Harvey Mudd College in Claremont, California. “In a typical lab study, we might have . . . on the order of a couple dozen [animals]. This is a couple of orders of magnitude more than that.”

In addition to sample size, another factor that might explain the long leaps recorded at the fair is motivation, and that’s something that the frog wranglers competing at the jubilee seem to tap into better than most scientists. “Sometimes we are the people who know the most about the particular organism we’re working on,” says Adolph. “But in this case, because there’s this big group of people who do this every year, they know more about it than most biologists who have measured this.” Indeed, professional frog handlers’ animals jumped an average length of 1.5 m, while the amateurs’ frogs averaged just 1.1 m, perhaps as a result of the professionals’ more practiced ability to scare the frogs, or possibly because they know where to collect the best-performing animals.

Regardless of the explanation for the vastly better jumpers at the fair, the study does raise some broader concerns about how work of this type is done in the lab. “It is very alarming for thinking about lab-based research in terms of behavior,” says biomechanics researcher Chris Richards, who studies the muscles of swimming frogs at Harvard’s Rowland Institute. “It’s kind of a wake-up call in that sense.”