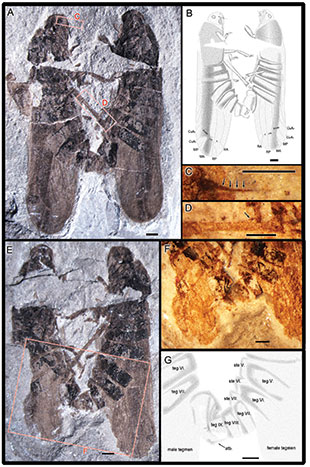 SEX IN STONE: Researchers debate whether the face-to-face mating position was natural in these copulating froghoppers or was an artifact of their preservation.S. LI ET AL., PLOS ONE, 8:E78188, 2013.Chungkun Shih had no intention of becoming a paleontologist, much less one who would devote his avocation to the sex lives of extinct insect species. But while working as a chemical engineer for international petroleum companies in northeastern China in the late 1990s, he was drawn to the open-air fossil markets in the town of Jinzhou. Every Sunday afternoon, on the streets of the bustling industrial city, Shih perused the wares of vendors hawking treasures from geologic eras past—millennia-old fossils of fish, insects, and other animals, which local farmers had unearthed as they plowed the soil.

The Chinese material that’s coming out of there now is absolutely stunning. They’re doing a lot of great work.—­Bruce Archibald,...

What began as a hobby became Shih’s obsession. The first few fossils he bought from the Jinzhou market were 125-million-year-old fish, some of which he gifted to his fishing buddies back home in New Jersey, where he now resides full-time. But his passion became invertebrate fossils—specifically, insects—which he would purchase and give to researchers at Capital Normal University in Beijing. “I donated my fossils for research, and never ever sold one piece of my fossils to anyone,” Shih recalls.

He cultivated an expert knowledge of the fossils and the insect evolutionary secrets they enshrined, and he built a good working relationship with researchers at Capital Normal, establishing himself as a visiting professor at the university in 2004. One day a couple of years ago, as graduate students working with him were sorting fossils into boxes to be stored for later study, Shih came across the stony impression of an extinct species of froghopper—a group of insects that makes its living by sucking the sap out of plants—with unusual wing structures. After the fossil was boxed and sent to the basement, among scads of other fossils locked in stone slabs, Shih and a colleague went to retrieve it in hopes of studying the structures, which are lacking in modern froghoppers and may have been involved in sound production. But they were stymied by the sheer volume of material stored there. “We went to the basement and sorted through six boxes of froghoppers,” he says. “We went through every piece for two days and couldn’t find it again.”

But their search yielded a magnificent find nonetheless: a 165-million-year-old fossil of two extinct froghoppers (Anthoscytina perpetua sp. nov.) locked in an eternal copulatory embrace—perhaps the oldest example of fossilized mating ever found. “It’s a very rare fossil,” Shih says. “From day one I was looking for mating fossils, but couldn’t find one until this one.”

Shih and his team published an image of the fossil and their interpretation of its paleontological importance late last year (PLOS ONE, doi:10.1371/journal.pone.0078188, 2013). The researchers concluded that Middle Jurassic froghoppers employed sexual organs and behaviors similar to those of their extant counterparts, indicating an early evolutionary equilibrium in froghopper form and function. Shih’s “going beyond just the physical character shapes into more of [the extinct species’] behavior, ecology, etc., makes these richer and more useful items for comparison,” says Bruce Archibald, a paleoentomologist at Simon Fraser University in Canada who has admired Shih’s work from afar. “The Chinese material that’s coming out of there now is absolutely stunning. They’re doing a lot of great work.”

Earlier in 2013, Shih and his colleagues found two extinct scorpionfly species among the jumble of fossils at Capital Normal that also harbored long-forgotten sexual secrets. The two fossils showed exaggerated male body parts, including abdominal extensions and enlarged genitalia, which they may have used for sexual display and male-on-male competition over mates. Much as the froghopper find did for copulation, the scorpionfly fossils stand as the earliest records of exaggerated male body parts in the order that comprises the two species (PLOS ONE, doi:10.1371/journal.pone.0071378, 2013). “As [Shih] points out in his paper, this very odd morphology of the extended abdomen has cropped up time and again in various scorpionfly groups,” says Archibald. “There’s going to be more to the story of understanding why this particular odd morph reoccurs. It’s very interesting when you see such patterns.”

With a wealth of fossils at his disposal, Shih’s ability to contribute to the paleontological literature shows no signs of waning anytime soon. “It’s an endless source of projects, probably for the next 100 years,” says Smithsonian Institution paleoecologist Conrad Labandeira, who collaborates with Shih and the lab at Capital Normal. “[Shih’s] the one that detects all of these really interesting things. He just scours slab after slab after slab.”

Even though Shih entered the field as an amateur, his impact on the study of fossil insects is no less appreciated by those trained in paleoentomology. “There’s a tradition in major American museums of benefiting from the work of such people and supporting their work,” says Vinton Thompson, president of the Metropolitan College of New York and an entomologist who recently collaborated with Shih. For his part, Shih remains humble about his contributions. “I was in the right time and the right place to collect and study these things,” he says. “I consider myself lucky to have the opportunity.”

The 64-year-old Shih’s retirement from full-time work in the petroleum industry in 2009 has only fueled his curiosity in the paleontological realm. With grad students and postdocs at Capital Normal, Shih coauthors about 12 papers per year, takes three annual trips to China, and admits to being “online every waking hour.” This form of “retirement” is common for paleontologists, according to Archibald. “Most of us die with our boots on,” he says, “at our desk or slumped over a microscope with a stack of ancient manuscripts on our table.”