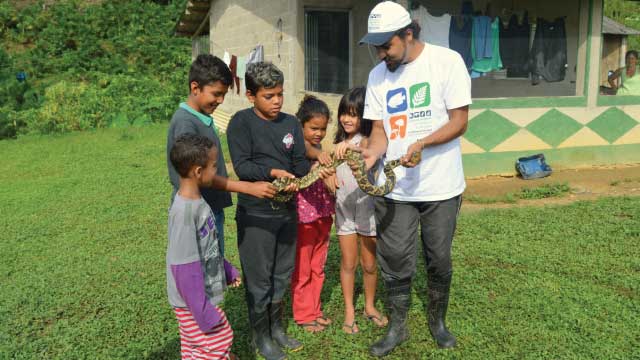 SNAKE, CHARMER: Biologist Bruno Rocha shows the rare boa, Corallus cropanii, to local children in Guapiruvu, the village closest to where the snake was found.LIVIA CORREA

Earlier this year, wildlife biologist Bruno Rocha received the call he’d been dreaming of his entire adult life. Two men from the small village of Guapiruvu, southwest of São Paulo, Brazil, had captured a snake that they said looked exactly like the one in the brochures Rocha had distributed in the area a couple of months earlier. Rocha, a researcher at the Butantan Institute, jumped into his car and drove the more than 200 kilometers that separate São Paulo from Guapiruvu. Upon arrival he confirmed, to his amazement, that the snake was indeed a Corallus cropanii, one of the world’s rarest boas. Standing before the exceedingly rare snake, Rocha became the first biologist to lay eyes on a...

Ever since 1953, researchers had been trying unsuccessfully to get hold of another live Cropan’s boa. For the past century, the Butantan Institute has received snake specimens from all over Brazil. Yet, among thousands of preserved snakes floating in the liquid-filled jars lining the shelves of collection rooms at the institute, C. cropanii is poorly represented—the institute only has one specimen. And there are just a handful of others held at other institutions. All known specimens of the boa came from a region of São Paulo state called Vale do Ribeira, listed by the UNESCO as a World Heritage site (now called Atlantic Forest South-East Reserves and including part of the state of Paraná) for having one of the largest continuous stretches of the Brazilian Atlantic Forest, a highly threatened biome and biodiversity hotspot.

We know next to nothing about the Cropan’s boa’s natural history: its habitat and how it uses the habitat, diet, foraging behavior, activity patterns, et cetera.—Robert Henderson
Milwaukee Pub­lic Museum

Among the reasons why researchers have not had access to living specimens of C. cropanii for so long is that, although boas are not venomous, people who live in the same forests as the snakes tend to kill them on sight. To enhance his chances of finding a living specimen of the rare boa, Rocha decided to enlist the help of the locals in finding and collecting the snake—populations of which are likely extremely rare, though researchers have never been able to conduct a thorough census. He got funding from the International Union for Conservation of Nature and, with the aid of some colleagues and a local association, “Amigos da Mata,” he set up an environmental education event in Guapiruvu late last year.

For the first part of the event, Rocha listed some of the 18 species of snakes that inhabit the region and informed attendees how to identify venomous ones. Then, he introduced C. cropanii.

“I told them that it’s a special animal, that this is the only place where it lives,” Rocha says. “And that if people continued to kill it, it could go extinct before we learn anything about it.”

He was careful to stress the scientific relevance of the reptile above its economic value, because Rocha knew that the species would be attractive to snake smugglers seeking to make a quick buck by selling live boas to the pet trade. After the event, he distributed brochures with a photograph of C. cropanii and his contact information in case someone spotted it.

Just two months later, Rocha’s approach proved successful. The two men who eventually found the C. cropanii said they were about to kill it when one of them recalled the snake from the brochures. So they decided to capture it and call Rocha.

Francisco Franco, a herpetologist who also works at the Butantan Institute but was not involved in the search for C. cropanii, says that the rare species cropping up now is the result of more than just chance.

“Rocha elaborated a project, decided to use a specific methodology, and obtained a result,” Franco says. “That is not luck, it’s scientific merit.”

Six years ago, Franco and his team described the fifth known specimen of C. cropanii—a dead snake that someone had photographed—and the first one found in Guapiruvu.

Due to its scarcity in herpetological collections, researchers know little about the ecology and behavior of C. cropanii. The new live specimen showed “great dexterity” in climbing when placed on a tree trunk, and Franco’s educated guess is that the species lives in the forest canopy, hidden from human eyes. “All the individuals reported so far were found on the ground or in easily accessible places, which contradicts this idea,” he says. “However, it could be one of the reasons why there are so few records.”

Robert Henderson, curator emeritus of herpetology at the Milwaukee Public Museum and one of the world’s most renowned experts on boas, shares his colleagues’ enthusiasm about the find. Henderson says he thinks that the new specimen will be valuable for shedding light not only on the habitat the boa prefers, but also on other aspects of the species’ biology.

“Is it an active or an ambush forager, or does it use a combination of strategies?” Henderson wrote in an email. “Assuming it’s nocturnal, where is it spending daylight hours?” Rocha and his colleagues are trying to garner more insights into the habits of C. cropanii by tracking the newly found specimen in the wild, using a custom-made radio-transmitter attached to the animal.

“Having only one individual, we can’t afford losing it,” Rocha says. “We needed a device with a long-lasting battery and a strong signal.”

The boa’s release was slightly delayed, both by the development of the specialized tracking tag and by snake biology—Rocha’s team had to wait until the boa shed its skin to glue the transmitter to its freshly emerged scales. On top of that, Rocha caught malaria.

“This is what happens when you spend too much time in the forest, trying to emulate the old naturalists,” he jokes.

Villagers in Guapiruvu continue to play an important role in the scientific project on C. cropanii. They took care of the specimen in an enclosure in the village before its release. Rocha hopes to continue this fruitful collaboration as the project unfolds. He says he would like to employ the two men who found the C. cropanii and is considering the possibility of utilizing crowdfunding to pay them. Rocha is also collecting anecdotes from other locals who, after seeing the live boa in the news or at the shelter in Guapiruvu, are recalling previous encounters with the species.

“We know next to nothing about [the Cropan’s boa’s] natural history: its habitat and how it uses the habitat, diet, foraging behavior, activity patterns, et cetera,” Henderson says. “It will be very exciting to learn of Bruno’s discoveries regarding this mysterious and elusive boa.”