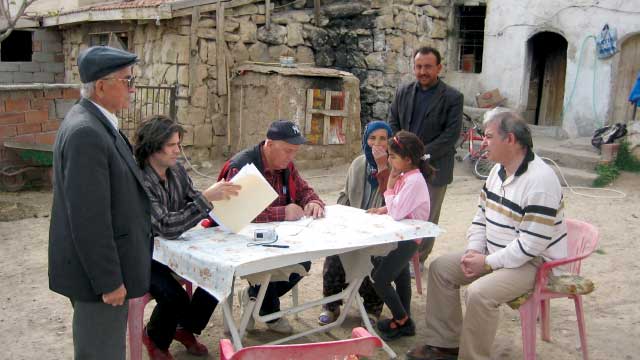 TALKING TURKEY: Michele Carbone’s “office” in the Turkish village of Sarihidir. He traveled to the country to study cases of mesothelioma and try to determine the environmental or genetic drivers of the disease.COURTESY OF MICHELE CARBONE

Twenty years ago, when Michele Carbone first started studying malignant mesotheliomas (MM), nobody knew that genetics played a significant role in the development of the tumors, which grow in the mesothelium—the innermost layer of cells lining the insides of body cavities—and are associated with asbestos exposure. “Until 2011, when eventually we published that we had found the gene, many in the field thought I was crazy, and that there was not such a thing as a meso gene,” Carbone told The Scientist in an email. But he believed that the cancers had a genetic component, and he found an MM-predisposition gene, BRCA1-Associated Protein 1 (BAP1), which was very often mutated in patients...

Most recently, Carbone’s investigations have branched into genealogy. After about two and a half years of genetic research and genealogical sleuthing, Carbone, an oncologist at the University of Hawaii Cancer Center, reported that four seemingly unrelated people with MM and family histories of cancer were in fact descended from an 18th-century German couple from whom they had inherited the same BAP1 mutation (PLOS Genet, 11:e1005633, 2015). Now, the family tree connecting that quartet of study participants includes 80,000 people. “The thing just keeps growing,” says Carbone.

Many in the field thought I was crazy, and that there was not such a thing as a mesothelioma gene.—Michele Carbone,
University of Hawaii Cancer Center

“I just think this is the coolest thing ever,” says Lisa Cannon-Albright, a genetic epidemiologist at the University of Utah who isn’t involved in the research. “This kind of study is something that I aspire to on a daily basis.” Cannon-Albright uses the Utah Population Database, which is linked to information from state cancer registries in Utah and Idaho, to identify gene variants that might predispose their carriers to cancer. “The interesting thing about [Carbone’s] study is it was backwards, it was the opposite,” she says. Rather than starting with a pedigree of family members who frequently get cancer and looking for the genes responsible, it started with a cancer-predisposing gene variant and worked backwards toward a family tree.

Carbone’s involvement in this story began in Turkey almost two decades ago. In 1997, Izzettin Baris, the late director of pulmonary medicine at the University of Hacettepe, invited Carbone to give a lecture at a lung cancer conference in Ankara. Carbone had heard about Baris’s research reporting that in certain villages in Turkey’s Cappadocia region, about half the population developed MM (Int J Cancer, 39:10-17, 1987). Baris attributed the cancers to exposure to erionite, an asbestos-like fiber deposited in the soft yellow rock that had formed after a long-ago volcanic eruption and was used as a local building material. Carbone agreed to give the talk as long as he could also visit the villages where MM was so common. “So when I went there, [Baris] took me for a trip.” In the villages, Carbone found that the distribution of cancer cases was not at all uniform. “In some houses, they would say everybody died of mesothelioma in this house. Then the house next to it, they’d say nobody died of mesothelioma here,” recalls Carbone. Baris suggested that perhaps the erionite exposure varied from house to house, but Carbone suspected a genetic connection. He created pedigrees for the village families and found familial patterns of MM occurrence that suggested susceptibility to the disease had a genetic basis and was passed down in an autosomal-dominant fashion (Lancet, 357:444-45, 2001).

Soon, US cancer patients started contacting Carbone to report that their families, too, had a high incidence of MM, as well as other types of cancer, such as eye and skin melanomas, though they had not been heavily exposed to asbestos. Carbone began looking for genomic regions associated with the cancers, which pointed him to the short arm of chromosome 3. He eventually identified mutations in BAP1 as the common genetic factor among the families (Nat Genet, 43:1022-25, 2011).

In Turkey, Carbone suspected that a mesothelioma-predisposing gene was being passed down through families, but he had not identified the mutated gene. In the U.S., Carbone had identified cancer-associated BAP1 mutations but was not sure if they were inherited or spontaneously occurring. To disentangle the relationship between the gene and the disease, he and his University of Hawaii colleague Haining Yang recruited MM patients whose parents or siblings also had MM or the related BAP1-associated cancers, and sequenced their BAP1 genes.

Out of the 22 patients who met the study criteria, three—presumably unrelated individuals in Maryland, California, and Texas—had the same BAP1 mutation: a deletion that results in a truncated protein. Another patient identified in a previous study (also from Texas) carried the mutation as well.

To learn whether the four might actually be related, and if so, how, the researchers enlisted the help of a professional genealogist, Harriet “Hart” Hoffman. She was able to show that the four study participants all descended from a German couple that had immigrated to Virginia in the early 1700s and had had 10 children. Based on the pattern of cancer development within the pedigree, two of those children passed down the BAP1 mutation that, centuries later, was detected in the study participants, who are now seven and eight generations removed from the German pair.

The researchers do not know whether it was the man or the woman in the German couple who had the BAP1 mutation. They did, however, track the man’s ancestry back four more generations, to Switzerland. The scientific gumshoes even located the original house that the Swiss ancestors had lived in almost 500 years ago—and when they visited, found that descendants of the same family were still living there. “Only in Europe you can find that people still live [in] exactly the same place,” says Carbone. Now the researchers would like to test the Swiss family members for the BAP1 mutation.

Members of this family tree are at higher than usual risk for developing these cancers and may want to be tested for the BAP1 mutation. If they carry it, Carbone says, they should be particularly careful to avoid asbestos and to make regular visits to the dermatologist and eye doctor, as the eye and skin melanomas associated with BAP1 mutations are treatable if detected early (MM is not).

Scientifically, the study “helps you understand how these genetic mutations transmit,” says Carbone. Such changes don’t tend to spring up instantaneously, “but in fact they are transmitted over the course of hundreds and hundreds of years.”