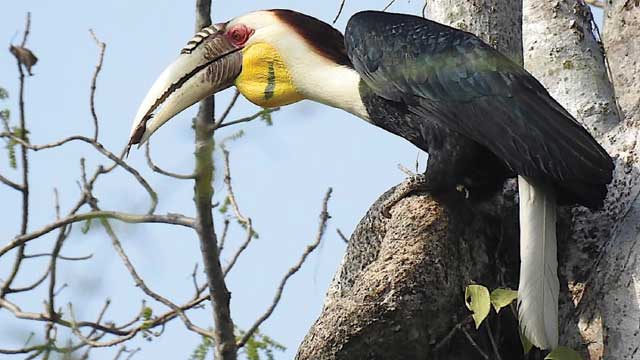 QUARRY NO MORE: A male wreathed hornbill perches at the entrance to his nest, ready to supply food to its occupants. COURTESY OF NATURE CONSERVATION FOUNDATION

For Tajik Tachang, a member of the indigenous Nyishi tribe that lives in the state of Arunachal Pradesh in northeastern India, the typical day begins at six o’clock in the morning. He and his companions walk ancestral trails through patches of jungle surrounding the Pakke Tiger Reserve (PTR) in the undulating foothills of the eastern Himalayas. The tribesmen are looking for nests in the hollows of false hemp trees (Tetrameles nudiflora), but they’re not seeking to kill the birds that use these nests, as did their fathers and grandfathers. They want to save them.

“Our group quietly watches their activities from a safe distance,” Tajik says. “When we do find a nest, we mark the tree in red, with the initials...

In the lush, green wilderness of the PTR and its surrounding jungles, the dense canopy of trees casts persistent twilight upon the forest floor, even during the middle of the day. These tropical rainforests are an integral part of the eastern Himalayan biodiversity hotspot and a favorite haunt of at least four species of hornbills—the great hornbill, the wreathed hornbill, the rufous-necked hornbill, and the oriental pied hornbill. Tall trees such as the false hemp, with large hollows in their trunks and branches, are ideal for perching and nesting, while plants such as figs and tropical nutmeg contribute to the hornbills’ frugivorous diet. The birds are slow-breeding, tending to fledge only one or two chicks per year, and they mate for life.

The forests fringing the southeastern part of the reserve are also the ancestral home of the Nyishi community. For generations, Nyishis hunted hornbills, named for their distinctive oversized beaks. The tribespeople harvested the bill and other parts of the bird’s body for decorating traditional garb. For example, men traditionally donned pudum, or the Nyishi headgear, prominently displaying a hornbill’s characteristic casque (an ornamental growth on the upper mandible of its beak). Nyishi people also shot hornbills for their meat and fat—the latter believed to cure body aches. To add to the birds’ woes, their nesting trees made excellent timber. But today, the tribe’s people have transformed themselves into conservationists, protecting the nests and habitat of the threatened hornbills.

“It was not difficult to monitor and conserve [hornbill species] within the reserve due to our stringent protection mechanisms,” says Tana Tapi, the field director of PTR. “But in the forests outside of PTR, hunting and habitat loss emerged as major threats to their survival.”

The loss of hornbill nesting trees also led to intense inter- and intraspecies competition for nesting sites. For example, there were occasions when wreathed hornbill pairs got evicted from their nest cavities by the much larger great hornbills, says Tapi.

As a member of the Nyishi community, Tapi had unique insight into tribal traditions.  “Hunting was prevalent in every Nyishi family,” he says. “The village headmen used muzzle-loaded [locally made] guns to shoot down birds and animals.” But Tapi’s perseverance enabled him to win over his fellow tribesmen, and he eventually convinced them to surrender their weapons and the hunting of hornbills. Tapi says that his task was not easy, but one day about seven years ago, the Nyishi tribesmen deposited nearly 67 guns and 14 steel traps in his office, heralding a new beginning.

The Nyishis’ commitment to protect hornbills achieved a major milestone in 2012, with the launch of the Hornbill Nest Adoption Program (HNAP), which seeks to conserve forests outside the PTR for protection of the species and their nesting trees. Initiated by the Arunachal Pradesh Department of Environment and Forests and the Nature Conservation Foundation (NCF), an organization based in Mysore and Bangalore, the program carved a niche for itself in conservation history due to the intimate involvement of the local Nyishi community. 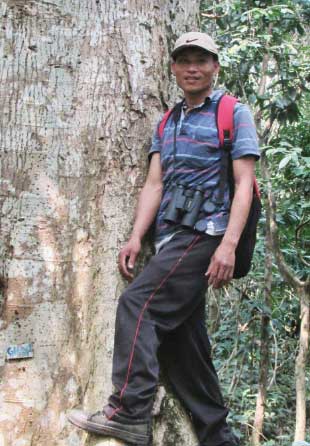 NEST PROTECTOR: Nyishi tribesman Tajik Tachang stands in front of a tree harboring a great hornbill nest he monitors.VIJAY TACHANGThe Nyishi council of elders, or Ghora Aabhe, from adjoining villages joined with the Forests Department and NCF to support the initiative. Most of these village headmen, former hunters of the birds, swore to become their protectors, and village youths and tribe members followed their lead.

In addition to nest cataloging and monitoring, the program incorporated an innovative feature—nest adoption by people living in the Indian metropolises of New Delhi, Mumbai, Pune, Bengaluru, and other cities. Foster parents were assigned to hornbill families and were asked to donate an annual “adoption fee,” which was used to sustain Nyishi nest protectors and to fund community welfare and development activities in local villages.

Four years ago, HNAP began with just three Nyishi nest protectors. But today, 16  of them, along with other community members from 14 villages, participate in the program. There are currently 36 nests under their surveillance, and 60 chicks have fledged successfully under the Nyishis’ watchful eye. There are an additional 41 nests within the PTR.

To date, HNAP has attracted 165 urban donors, among whom adoption fees range from $125 to $735. The effort has also received support from the Rotterdam Zoo in the Netherlands and the Greater Vancouver Zoo in Canada. This year, the Nyishi community won the India Biodiversity Award, a joint initiative of India’s Ministry of Environment, Forest and Climate Change and the United Nations Development Program (UNDP).

All of this success and recognition gives Takam Nabum, chairman of the Ghora Aabhe Society, reasons to be proud. He displays the glittering plaque and the UNDP award in his office in the Nyishi village of Mobuso. “The program has not only given a new lease of life to our state bird, but to our community as well,” he says. “The sustainable financial benefits received motivate us to protect the bird. Then, awards and recognitions such as these inspire us further.”

Even changes to the Nyishis’ traditional dress reflect their pledge to protect their one-time quarry. Men in the tribe have replaced actual hornbill casques used on their headgear with fiberglass or wooden facsimiles.

Aparajita Datta, an NCF wildlife biologist, has been recording an increasing number of hornbill fledglings leaving nests in July and August for the past decade—a hopeful sign for the threatened species. She says the Nyishi community has played an integral role in the protecting the birds and their habitat. “No long-term conservation effort can flourish without the active participation and involvement of forest communities,” Datta says.