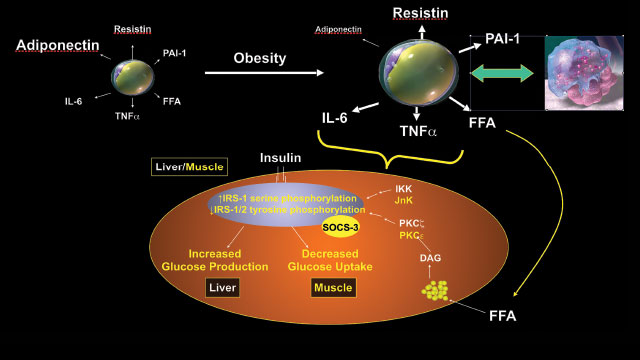 THE ENDOCRINE THEORY: Some researchers have posited that fat cells may secrete molecules that affect glucose homeostasis in muscle or liver tissue.COURTESY OF MITCHELL LAZAR

In the early 19th century, Belgian mathematician Adolphe Quetelet was obsessed with a shape: the bell curve. While helping with a population census, Quetelet proposed that the spread of human traits such as height and weight followed this trend, also known as a Gaussian or normal distribution. On a quest to define a “normal man,” he showed that human height and weight data fell along his beloved bell curves, and in 1823 devised the “Quetelet Index”—more familiar to us today as the BMI, or body mass index, a ratio of weight to height.

Nearly two centuries later, clinicians, researchers, and fitness instructors continue to rely on this metric to pigeonhole people into categories: underweight, healthy, overweight, or obese. But Quetelet never intended the...

Although there is considerable debate surrounding the prevalence of metabolically healthy obesity, when obesity is defined in terms of BMI (a BMI of 30 or higher), estimates suggest that about 10 percent of adults in the U.S. are obese yet metabolically healthy, while as many as 80 percent of those with a normal BMI may be metabolically unhealthy, with signs of insulin resistance and poor circulating lipid levels, even if they suffer no obvious ill effects. “If all we know about a person is that they have a certain body weight at a certain height, that’s not enough information to know their health risks from obesity,” says health-science researcher Paul McAuley of Winston-Salem State University. “We need better indicators of metabolic health.”

If all we know about a person is that they have a certain body weight at a certain height, that’s not enough information to know their health risks from obesity. We need better indicators of metabolic health.—Paul McAuley,
Winston-Salem State University

The dangers of being overweight, such as a higher risk of heart disease, type 2 diabetes, and other complications, are well known. But some obese individuals—dubbed the “fat fit”—appear to fare better on many measures of health when they’re heavier. Studies have found lower mortality rates, better response to hemodialysis in chronic kidney disease, and lower incidence of dementia in such people. Mortality, it’s been found, correlates with obesity in a U-shaped curve (J Sports Sci, 29:773-82, 2011). So does extra heft help or hurt?

To answer that question, researchers are trying to elucidate the metabolic reasons for this obesity paradox.

In a recent study, Harvard University epidemiologist Goodarz Danaei and his colleagues analyzed data from nine studies involving a total of more than 58,000 participants to tease apart how obesity and other well-known metabolic risk factors influence the risk of coronary heart disease. Controlling these other risk factors, such as hypertension or high cholesterol, with medication is simpler than curbing obesity itself, Danaei explains. “If you control a person’s obesity you get rid of some health risks, but if you control hypertension or diabetes, that also reduces health risks, and you can do the latter much more easily right now.”

Danaei’s team assessed BMI and metabolic markers such as systolic blood pressure, total serum cholesterol, and fasting blood glucose. The three metabolic markers only explained half of the increased risk of heart disease across all study participants. In obese individuals, the other half appeared to be mediated by fat itself, perhaps via inflammatory markers or other indirect mechanisms (Epidemiology, 26:153-62, 2015). While Danaei’s study was aimed at understanding how obesity hurts health, the results also uncovered unknown mechanisms by which excess adipose tissue might exert its effects. This particular study revealed obesity’s negative effects, but might these unknown mechanisms hold clues that explain the obesity paradox?

Other researchers have suggested additional possibilities—for example, that inflammatory markers such as TNF-α help combat conditions such as chronic kidney disease, or that obesity makes a body more capable of making changes to, and tolerating changes in, blood flow depending on systemic needs (Am J Clin Nutr, 81:543-54, 2005).

According to endocrinologist Mitchell Lazar at the University of Pennsylvania, the key to explaining the obesity paradox may be two nonexclusive ways fat tissue is hypothesized to function. One mechanism, termed the endocrine theory, suggests that fat cells secrete, or don’t secrete enough of, certain molecules that influence glucose homeostasis in other tissues, such as muscle or liver. The first such hormone to be discovered was leptin; later studies reported several other adipocyte-secreted factors, including adiponectin, resistin, and various cytokines.

The other hypothesis, dubbed the spillover theory, suggests that storing lipids in fat cells has some pluses. Adipose tissue might sequester fat-soluble endotoxins, and produce lipoproteins that can bind to and clear harmful lipids from circulation. When fat cells fill up, however, these endotoxins are stashed in the liver, pancreas, or other organs—and that’s when trouble begins. In “fat fit” people, problems typically linked to obesity such as high cholesterol or diabetes may be avoided simply because their adipocytes mop up more endotoxins.

“In this model, one could imagine that if you could store even more fat in fat cells, you could be even more obese, but you might be protected from problems [associated with] obesity because you’re protecting the other tissues from filling up with lipids that cause problems,” says Lazar. “This may be the most popular current model to explain the fat fit.”

Although obesity greatly increases the risk of type 2 diabetes—up to 93-fold in postmenopausal women, for example—not all obese people suffer from the condition. Similarly, a certain subtype of individuals with “normal” BMIs are at greater risk of developing insulin resistance and type 2 diabetes than others with BMIs in the same range. Precisely what distinguishes these two cohorts is still unclear. “Just as important as explaining why some obese people don’t get diabetes is to explain why other subgroups—normal-weight people or those with lipodystrophy—sometimes get it,” Lazar says. “If there are multiple subtypes of obesity and diabetes, can we figure out genetic aspects or biomarkers that cause one of these phenotypes and not the other?”

To Lazar, McAuley, and other researchers, it’s increasingly evident that BMI may not be that metric. Finding better ways to assess a healthy weight, however, has proven challenging. Researchers have tested measures, such as the body shape index (ABSI) or the waist-hip ratio, which attempt to gauge visceral fat—considered to be more metabolically harmful than fat in other body locations. However, these metrics have yet to be implemented widely in clinics, and few are as simple to understand as the BMI (Science, 341:856-58, 2013).

Independent of metrics, however, the health message regarding weight is still unanimous: exercise and healthy dietary choices benefit everyone. “At a certain point, despite all the so-called fit-fat people, the demographics say that there’s a huge risk of diabetes and heart disease at very high BMI,” notes Lazar. “We can’t assume we’ll be one of the lucky ones who will have a BMI in the obese category but will still be protected from heart disease.”