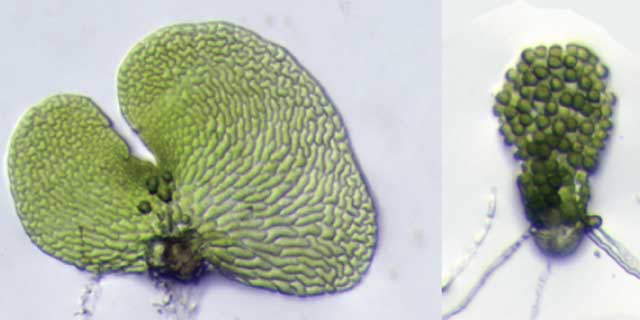 In the mid-1990s, Jody Banks of Purdue University was mutating the genomes of ferns using dimethyl sulfate (DMS) and screening for changes in how the plants determined their sex. Ferns can grow as either males or females (the latter are really hermaphroditic, and in the absence of males can make a few sperm in order to self-fertilize). Normally, Ceratopteris richardii ferns grown alone develop into females, but plants grown near genetically identical spores develop into males.

“The female secretes a pheromone telling others to be male,” Banks explains. “If the female [pheromone] goes away, the male will switch back to female. It’s really cool.” This allows plants to outcross when they are near other developing ferns that respond to the pheromone—thought to be a type of gibberellin—but still be...

Among her mutant ferns, Banks found that some plants didn’t follow these normal sex-determining rules. Grown in the presence of the females’ pheromone and ABA, some mutants still became normally sized males. Taking away the female-emitted hormone, she could induce the plants to switch to hermaphrodites, which she then selfed to produce offspring that were homozygous for an ABA-insensitive mutation. Knowing that in flowering plants (angiosperms) ABA signaling is critical for proper water conservation, she suspected that these homozygous mutants would not fare well. But to her surprise, the ferns grew just fine. Their leaves did not wilt nor did the plants dry out—phenotypes typical of ABA-insensitive angiosperms.

“We had like 30 independent mutants, and none of them gave us any phenotypes that we expected,” Banks recalls. “I was running around the biology department [asking], ‘Does anyone know what ABA does in ferns?’ ” But no one could answer her question.

It would be another 15 years before she got her first clue. In 2011, she read a newly published paper from University of Tasmania researchers who reported that, in contrast to flowering plants, ferns do not use ABA signaling to shut tiny pores on their leaves called stomata when water-stressed (Science, 331:582-85). Rather, the stomatal response to ABA appears to have evolved in angiosperm ancestors to help them survive dry environments, the authors concluded. “That was my eureka moment,” Banks says. She wrote to coauthor Scott McAdam right away to tell him about her mutants—which she reasoned could provide genetic evidence that McAdam and his advisor Tim Brodribb were right about ABA signaling in ferns.

Upon receiving some of Banks’s mutants, McAdam began experimenting with the plants to confirm that they indeed had normal responses to humidity despite being insensitive to ABA. “The ferns had very predictable responses, exactly what we’d expect [of wild-type plants],” he says. Meanwhile, Banks sequenced the ferns’ transcriptomes to identify the genes underlying the ABA insensitivity, and identified alterations to a homolog of open stomata 1 (OST1), a well-known ABA signaling gene in flowering plants. The researchers then used RNA interference to block expression of the gene, which they named GAIA1, and saw severely altered sex determination, just as Banks had observed in her original mutants (PNAS, 113:12862-67, 2016).

One wonders, if one looks at all the signaling pathways we have in plants, how many have been rewired?—Luca Comai, University of California, Davis

“I was surprised and impressed,” says Luca Comai, a plant geneticist at the University of California, Davis, who was not involved in the research. “I did not know that ABA had such an evolutionary history. . . . One wonders, if one looks at all the signaling pathways we have in plants, how many have been rewired?”

Ray Ming, a plant biologist at the University of Illinois at Urbana-Champaign who also did not participate in the study, agrees. The study suggests that “there is remarkable plasticity of genes and gene networks regulating diverse developmental programs during the course of evolution, reflecting adaptation of plants to the changing climate across the geological time scale,” he told The Scientist in an email.

Although the researchers can’t say why ABA signaling was coopted to control stomatal responses to water stress in flowering plants, McAdam suspects there is a link to the pathway’s role in ferns’ response to low water availability. “Our current thought is that ABA is produced at very high levels when plants are drought stressed; even if [ferns] are not responsive to it in their leaves, they still produce it,” he says. This ABA will end up in the fern’s spores, causing them to develop into hermaphrodite gametophytes, which can self to form a new adult plant. “It’s almost like an emergency mechanism to at least continue [reproducing] if the plant is experiencing extreme conditions.”

Another role ABA signaling plays in flowering plants is ensuring seed dormancy, which may have evolved from ABA control over spore dormancy in ferns, McAdam adds. ABA-insensitive mutants in seed plants have compromised seed dormancy as well. “This hormone has played a major role in drought sensing for over 400 million years . . . so it was a very simple evolutionary step to take that signaling pathway and coopt it.”