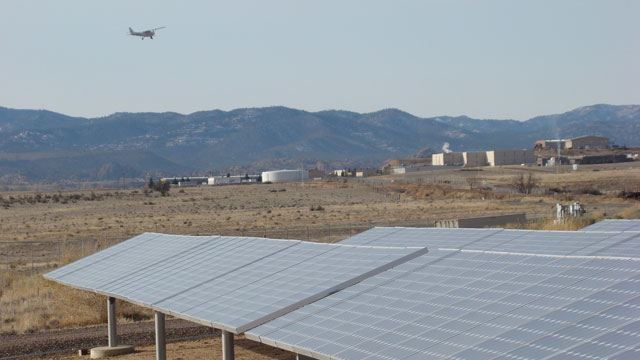 ENERGY, NOT GEESE: Converting airport grasslands to biofuel, solar, or wind production may produce alternative energy while reducing the local abundance of wildlife hazardous to aircraft.PHOTO BY DAVID BERGMAN

Usually they leave no more than blood smears; sometimes, busted engines and pulpy, feathery messes. Bird strikes, which occur when the flight paths of airplanes and avians suddenly intersect, can be costly and dangerous. According to the Federal Aviation Administration, collisions between wildlife and aircraft cause damage costing up to $400 million every year in the U.S. alone and have been responsible for some 200 deaths worldwide since 1988. “Birds are far more of a threat than terrorism is for bringing aircrafts down,” says Nicholas Carter of the World Birdstrike Association.

Because birds and planes share the same airspace, accidents are bound to happen, particularly during takeoff, landing, or low-altitude flight. The severity of a collision depends on several...

To prevent these accidents, officials at many larger airports have taken steps to discourage wildlife from entering their grounds. They’ve raised fences, trimmed landscaping, covered trash bins, installed commercial bird-control systems, brought out dogs, and loaded shotguns. And a few have hired biologists.

“It is important to understand what attracts hazardous wildlife to airport habitats so those habitat components can be altered or removed,” says Travis DeVault, a biologist at the US National Wildlife Research Center’s Ohio field station in Sandusky. DeVault leads a research program dedicated to reducing bird strikes. It’s critical, he says, to “use science to manage hazards at airports and mitigate strike risk.”

It is important to understand what attracts hazardous wildlife to airport habitats so those habitat components can be altered or removed.—­Travis DeVault, US National Wildlife Research Center

“Birds come to airports for three things: food, water, and shelter,” says Carter. “We need biologists at airports and Air Force bases to figure out what’s going on.” Food is the primary attractant. Large birds—such as waterfowl, gulls, and raptors—and smaller, flocking species hunt everything from insects to small mammals at airports.

To figure out which foods are attracting birds struck by commercial planes at the Perth Airport in Australia, biologist Michael Bunce and his colleagues sequenced the contents of their guts. The scientists examined 77 avian carcasses collected by airport employees between October 2011 and November 2012, generating more than 150,000 DNA sequences.

With advances in next-generation sequencing, “for the first time, we can get into really complicated substrates, like gut contents, and get a really good handle on what things are eating,” says Bunce, who leads the Ancient DNA Laboratory at Murdoch University in Perth. 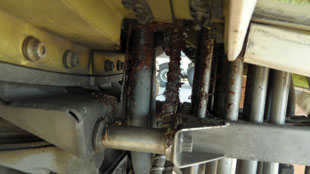 AFTERMATH: Carnage typically found in the the underbelly of an aircraft after colliding with a bird. DNA analysis can help determine what species of bird was involved.NICHOLAS B. CARTER - BIRDSTRIKE CONTROL PROGRAMThe species most commonly found in the bird guts included house mice, grasshoppers, and grasses. Sequence data also revealed invasive mosquito fish, which hadn’t previously been considered part of the problem, inhabiting the waterways surrounding the airport.

“This is a really nice study showing the huge potential of the metabarcoding approach,” explains François Pompanon, an assistant professor of genetics and deputy director at the Laboratoire d’Ecologie Alpine in Grenoble, France, who was not involved in the Australian study. “[It] is a good proof of concept, and the method could be used for a regular survey in order to set up management schemes.”

Theoretically, such comprehensive analyses of potential ecological drivers of bird strikes should eventually pay for themselves, given the costs of damage they could help avoid. But “the lack of research is a real challenge for airports,” says Bird Strike Association of Canada Executive Director Gary Searing. Across the board, he adds, “there is virtually no money for research.”

While bird strikes will probably never be 100 percent preventable, researchers have repeatedly shown that eliminating the food, water, and shelter that attract wildlife to airports can help. “If you can solve the problem at the habitat-modification level, [by] changing something that’s attracting them to the airport, like removing the food source at a relatively cheap cost . . . they’re not going to be coming back,” says John Ostrom, Bird Strike Committee USA chairman.

And Bunce is convinced that DNA sequencing is an important first step toward modifying airport habitats with an eye to prevention. “It’ll gain traction, it’ll become best practice,” he says. “DNA has promised a lot in the wildlife sector, but it’s nice to be able to deliver something incredibly rapidly.”