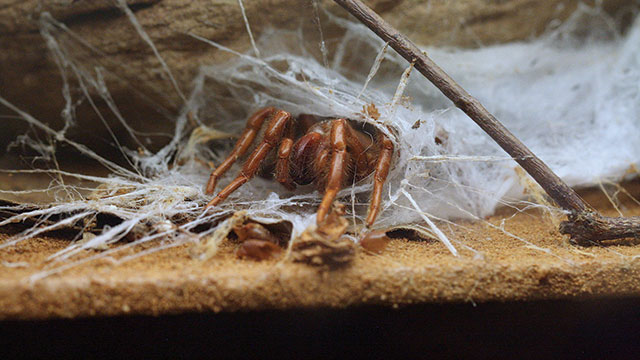 NOT SO ITSY BITSY: Australia’s Blue Mountains funnel-web spider (Hadronyche versuta), which can grow up to 4 cm long, lies in wait for prey.TOBY HUDSON/WIKIMEDIA COMMONS

In the mid-1990s, researchers began commercializing plants that expressed toxin proteins from the bacterium Bacillus thuringiensis (Bt). The toxins confer resistance to specific pests such as corn borers, cotton bollworms, and potato beetles. Farmers in the U.S. now grow millions of acres of Bt corn, cotton, and potatoes every year. But the Bt proteins cannot protect against all pests, in particular species outside of order Lepidoptera (moths and butterflies), and in recent years reports of Bt resistance in at least five major pest species have scientists looking for ways to enhance the crops’ protection.
“You will have to produce new technologies to conquer the resistance in insects,” says Inaam Ullah, a graduate student at the National Institute for Biotechnology and Genetic Engineering...

Some researchers have turned to spiders, the most speciose venomous animal on the planet, for help. The ArachnoServer, a database of sequence, structural, and functional information for spider venom peptides and proteins, currently includes nearly 950 toxins from 86 species, and the insecticidal potential of a handful of these has been well documented, including that of ω-hexatoxin-Hv1a (Hvt), a peptide in the venom of the Australia’s Blue Mountains, funnel-web spider (Hadronyche versuta). As result, researchers at NIBGE inserted a synthetic version of the Hvt gene into the genomes of tobacco and cotton, yielding plants that produce the toxic peptide themselves (Transgenic Res, 15:349-57, 2006).

“It would be a fantastic adjunct to Bt plants because this toxin is effective against a wide range of pests, including aphids, which Bt doesn’t affect at all,” says Glenn King, a biochemist at the University of Queensland in Australia who studies spider toxin–armed Arabidopsis as a model system. It’s particularly exciting, he adds, because Hvt, which blocks voltage-gated calcium channels in insects, works differently than pesticides already in use. “This is a completely novel insecticide target . . . so there’s no preexisting resistance.” 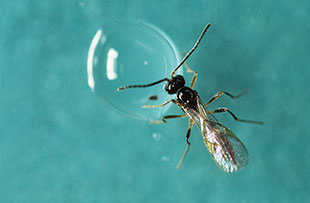 SAFE FROM HARM: According to Ullah’s research, beneficial insects, such as this aphid parasitoid (Aphidius colemani), can feed on a sucrose solution containing Hvt without succumbing to the toxin.GABRIELA BRANDLE, AGROSCOPE ISSBut any toxin peptide that is to be truly useful in an agricultural setting must be more than a good pesticide. It’s also important that the spider-venom peptides do not harm nontarget species, especially those that provide ecosystem services such as pollination. Hvt is known to be highly arthropod-specific—“there are very low chances, if any, that they can affect any higher organisms,” Ullah says—but what about nontarget insects?

Interested in these biosafety issues, Ullah e-mailed the biosafety group at Agroscope, a Swiss federal agricultural research center in Zürich. In 2011, he secured funding from the Higher Education Commission of Pakistan and hopped on a plane to Switzerland to work with Jörg Romeis and others at Agroscope’s Institute for Sustainability Sciences. He shipped himself seeds of Hvt-carrying cotton and tobacco plants developed by his colleagues at NIBGE, then grew the plants in greenhouses, measured the Hvt produced by each species, and tested the effects of ingesting the toxin peptide or plants expressing it on both target and nontarget insects.

As expected, the toxin effectively killed pests: ingestion of either the purified peptide or the leaves of the Hvt-transgenic plants had fatal effects on the African cotton leafworm (Spodoptera littoralis) and the tobacco budworm (Heliothis virescens). More importantly, the purified toxin peptide did not harm any of four beneficial nontarget species: the common green lacewing (Chrysoperla carnea), the aphid parasitoid (Aphidius colemani), the seven-spot ladybird (Coccinella septempunctata)—three aphid predators used for biological control—or the western honey bee (Apis mellifera) (J Appl Entomol, doi:10.1111/jen.12156, 2014). “We tested the nontarget [insects] with the same concentration [of toxin peptide that killed the pests], and it did not affect them in any way,” Ullah says.

The results confirm research published this June in Proceedings of the Royal Society B (281:20140619, 2014), in which a group of UK researchers demonstrated that Hvt, linked to a carrier molecule called GNA from the common snowdrop plant (Galanthus nivalis), did not reduce honey bee survival or rates of learning and memory. “They did a whole range of studies that show that it has absolutely no effect at all,” says King. “All of the data is looking very, very strong.”

But while the science is promising, public acceptance of crops carrying spider toxin genes is another issue entirely. “The big question of course is regulation and public concern about transgenic plants in general,” says King.

As a precursor to venom peptide–carrying plants, researchers at Kalamazoo, Michigan–based Vestaron, a company spun out in 2006 from King’s research when he was at the University of Connecticut, are aiming to simply market the peptides as biopesticides that can be sprayed on commercial crops. “We think that that’s an important step in commercializing this whole field of venomics, [the study of] peptides isolated from predatory animals,” says Bob Kennedy, chief scientific officer at Vestaron.

This March, the company earned EPA approval for GS-ω/κ-HxTx-Hv1a, colloquially known as the “hybrid” peptide, also produced by H. versuta. The peptide targets the same voltage-gated calcium channel as Hvt does, as well as a voltage-gated potassium channel. Long-term, the researchers hope to develop and market plants that carry this peptide, specifically plants that already have Bt toxin genes incorporated, but for now, they are expressing it in yeast and looking to market it as a spray-on insecticide “as a first step,” Kennedy reiterates. “Our target market is high-value vegetable crops.”

Transgenic crops carrying peptides from spider venom may not hit the market for several years yet, but the use of spider-venom peptides to protect crops “is not a theoretical thing,” King says. “This is really happening.”