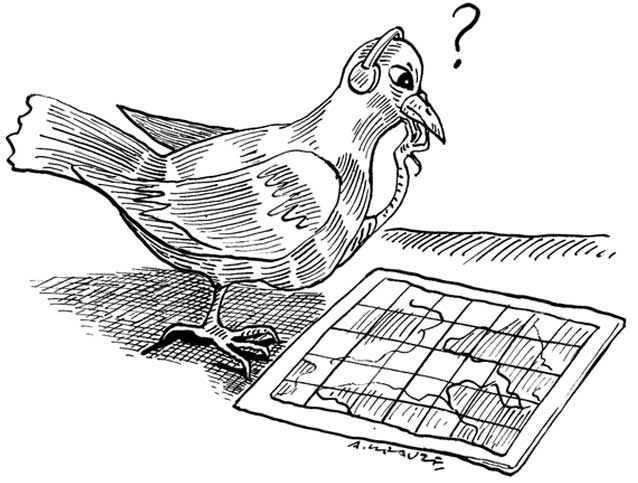 ANDRZEJ KRAUZEOn October 5, 1998, more than 2,000 homing pigeons went missing, some straying from their lofts for weeks. They had been released at the start of two races—one from northern Virginia to Allentown, Pennsylvania, and another from western Pennsylvania to Philadelphia—but more than 90 percent of them didn’t fly directly home, as they normally do. “The race was a ‘smash’—the birds [didn’t] come back,” says Jonathan Hagstrum, a geophysicist with the US Geological Survey. “Normally, a smash is due to weather—if it’s raining, the birds land—but the weather was fine, everything was great, the birds just didn’t show up. . . . Nobody could explain it.”

Curious, Hagstrum, who read about the mysterious disappearances in his local newspaper, started poking around for possible explanations. It had previously been reported that pigeons could sense very low-frequency, or infrasonic, sounds. And Hagstrum knew that low-frequency sounds are continually being...

He called the Pennsylvania Department of Transportation, but it had not been performing any blasting in the area of the races that day. He also contacted a nuclear power plant located near where the two races crossed paths “to see if they had conducted any high pressure gas release, or other acoustic disturbance, around midday on the day of the races,” Hagstrum says. “I was even thinking Civil War enactments.” Then, he read about how researchers sometimes used sonic booms emanating from the Concorde—the supersonic passenger airliner which was then still shuttling the wealthy across the Atlantic Ocean—to study how infrasound travels. Sure enough, the Concorde had flown on October 5, and was running a couple of hours late—meaning it had broken the sound barrier, producing a sonic boom, during the races. Hagstrum was also able to trace a handful of other smashed pigeon races to the travel schedule of the Concorde, and he began to feel more confident that pigeons used low-frequency sound to orient themselves with respect to their lofts.

Two tools are key to successful navigation—a compass, to find your bearing, and a map, to know where you are relative to home. Pigeons were known to use a variety of compass systems, most notably the position of the sun. But, “the map part has been more contentious,” says neuroethologist Cordula Mora of the J.P. Scott Center for Neuroscience, Mind and Behavior at Bowling Green State University in Ohio.

Some studies suggest that pigeons use the Earth’s geomagnetic field to navigate, “but we can show at the same time that the birds can orient without the geomagnetic field,” says behavioral and sensory ecologist Roswitha Wiltschko of Goethe University in Frankfurt, Germany. Other pigeon mapping hypotheses have included the use of landscape features, gravity, and even smell. “If you cut the olfactory nerve in a pigeon or if you plug its nostrils, its ability to home falls way off,” says Hagstrum.

People look at a pigeon, and think it looks kind of dumb, but I’ve come to realize these things are just incredibly sophisticated.—­ Jonathan Hagstrum, US Geological Survey

But these factors couldn’t explain some famously bizarre pigeon behavior. In Hagstrum’s senior year at Cornell University, he had attended a talk by pigeon researcher Bill Keeton, then the chair of the Cornell biology department, who spoke of some particularly strange behaviors he’d observed at his release sites in Upstate New York. At one site, called Jersey Hill, the birds would consistently get lost, most never returning home at all—except for one day, August 13, 1969, when all the birds flew home just fine. At two other sites, Castor Hill and Weedsport, the birds regularly took off at a consistently wrong bearing. “[Keeton] said, ‘I have no idea what’s going on at these sites,’” Hagstrum recalls. “‘Do you geologists have any suggestions?’” Years later, Hagstrum’s Concorde discovery affirmed his hunch that the answer could be sound.

The idea that pigeons may be using infrasound to navigate was actually first proposed by Keeton in the 1970s. Hagstrum revisited this idea, turning to a public record of Keeton’s data, collected on thousands of releases from 200 sites over a period of 14 years. Hagstrum also collected weather information for the dates of Keeton’s pigeon releases, including August 13, 1969, and ran the data through a computer program to calculate how the patterns might have influenced sound travel. Sure enough, the simulations showed that on most days, little to no infrasound from the Cornell loft area ever arrived at Jersey Hill—it’s in what’s called a sound shadow, Hagstrum says. But on August 13, 1969, the day the birds all returned home without a problem, the sound was refracted in such a way that the shadow was lifted.

Sound patterns also explained the disorientation of the pigeons from Keeton’s other sites, Hagstrum says. “The pigeon behavior seemed to correspond with the way sound was moving through the terrain within the weather constraints. This is compelling evidence that the pigeons are actually using sounds [to navigate].” After several years of working on this project in his off-hours—his full-time research is devoted to studying paleo-, geo-, and rock magnetism—Hagstrum published his results in January (Journal of Experimental Biology, 216:687-99, 2013).

“I think that infrasound is also an important factor,” agrees Wiltschko, though she doubts it’s the only factor. “The pigeon’s map is redundant,” she says, with multiple signals likely influencing navigation. Furthermore, because pigeons learn their maps when they are young, the signals they focus on will likely depend on what’s available at their home loft. “Pigeons are probably rather opportunistic,” she says. “If a pigeon finds a factor useful, it will include it into its map.”

Whatever they’re using, there’s no doubt the system is “very sophisticated,” Hagstrum adds. “People look at a pigeon, and think it looks kind of dumb, but I’ve come to realize these things are just incredibly sophisticated. They do incredible things in a seemingly miraculous way.”