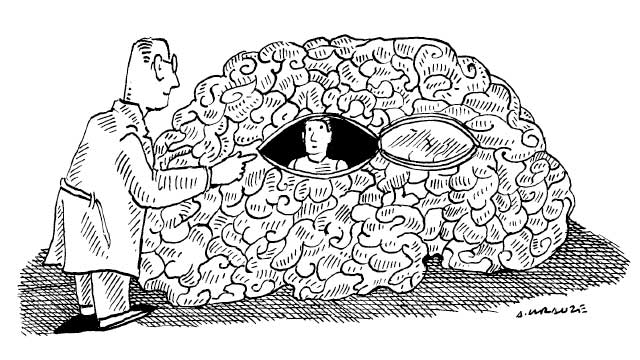 Neurodegenerative diseases are tough nuts to crack, not just because of the inherent difficulties of sorting through what has gone awry, and why, but also due to a dearth of biomarkers that could help spot the diseases and track their progression. This inability to easily diagnose many forms of neurodegeneration means that the diseases can’t be treated early in their progression. The lack of biomarkers also hinders the certainty with which researchers running clinical trials can assess whether and how well experimental treatments of the diseases are working. A simple, noninvasive eye scan now being developed for Alzheimer’s disease (AD), however, may help address both shortcomings.

AD researchers already utilize amyloid positron emission tomography (PET), in which tracers are injected into patients’ brains to make the disease’s characteristic amyloid plaques detectable by PET imaging. But the scans are very expensive, spurring the continuing hunt for biomarkers. “What...

So Black has been working with Cedars-Sinai colleague Maya Koronyo-Hamaoui and others on a different way of peering into the skull. “The retina is really part of the brain” and shares many cell types with it, explains Koronyo-Hamaoui, so it makes sense that people who have amyloid plaques in their brains might also have them in the retina. To find out whether that’s the case, Koronyo-Hamaoui has led animal studies that showed the quantity of plaques in the retina correlates with levels in the brain (NeuroImage, 54:S204-S217, 2011).

What we would like to see is extension of this data across different stages of Alzheimer’s disease, and how it relates
to other biomarkers, such as amyloid imaging.—Douglas Galasko, University of California,
San Diego, School of Medi­cine

In a new study, the researchers analyzed brains and eyes from cadavers of humans with and without AD, and found that plaques tend to cluster in a far corner of the retina, the superior quadrant, an area not typically examined by ophthalmologists.

To visualize the plaques in living people, the researchers had volunteers eat a chocolate pudding spiked with curcumin—which gives the spice turmeric its deep-yellow color—2 or 10 days prior to scanning their eyes. Previous experiments had shown that curcumin fluoresces when bound to the characteristic amyloid-β plaques of Alzheimer’s, and the team selected a form of the substance with relatively high bioavailability, Koronyo-Hamaoui says.

The researchers then used a modified ophthalmoscope to look at the superior quadrant in the retinas of AD patients, and compared the readings with those of healthy volunteers. Those with the disease showed twice as much amyloid-β–linked fluorescence in that area of the eye, the team reports (JCI Insight, 2:e93621, 2017).

This latest study is “an interesting and novel and promising step,” says Douglas Galasko, a neurologist at the University of California, San Diego, School of Medicine who was not involved in the work but has collaborated in the past with some of its authors. “What we would like to see is extension of this data across different stages of Alzheimer’s disease, and how it relates to other biomarkers, such as amyloid imaging.”

While previous studies from the Cedars-Sinai group have suggested amyloid-β deposition on the retina could reflect similar aggregations in the brain, “I think that this is much stronger,” in part because the researchers analyzed tissue from both the human retina and the brain, says eye researcher Bang Bui of the University of Melbourne who was not involved in the work. As for the scans of living patients, “I think it’s good proof of principle and certainly really exciting to take things from there, to go forward with this, and maybe to a larger clinical trial,” he adds.

The development of a simple noninvasive procedure using a device that’s already in wide clinical use is particularly exciting, Bui tells The Scientist. Koronyo-Hamaoui, Black, and two other coauthors of the study have founded a company, NeuroVision Imaging, that is now working on getting US Food and Drug Administration approval for the modified ophthalmoscope as a detector of fluorescence in the eye.

If further testing confirms the results, Black envisions people in their 50s and 60s one day getting routine eye scans for Alzheimer’s disease as part of their yearly checkups. “If we could potentially stop the disease . . . I think that’s a realistic possibility—that’s an excellent outcome,” he says. “If we could delay the onset of the symptomatic phase of the disease for 5 years or 10 years, that’s also a wonderful outcome.”