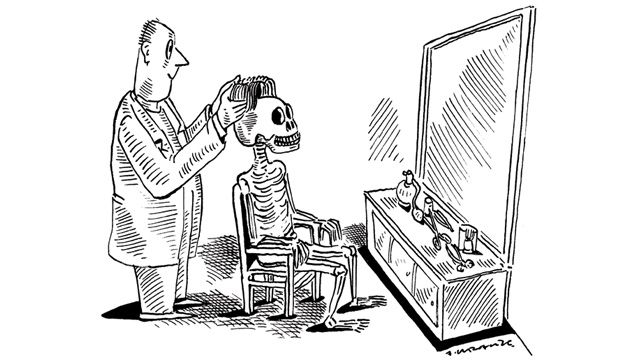 Archaeologists working in Poland in 2010 unearthed the remains of two females mysteriously buried among monks in the medieval Benedictine Abbey in Tyniec on the outskirts of Krakow. The team extracted DNA from a tooth of one woman and estimated that its owner had died sometime between the 12th and 14th centuries and likely had brown eyes and dark hair.

The following year, the same lead archaeologist, Jagiellonian University professor Henryk Głąb, excavated another pair of skeletons—these were male—buried in the Church of St. Andrew in Krakow, aged 60 and 75 at the time of their deaths in the 14th century. They were suspected to have been Polish magnates, or members of the nobility, the younger man with blue eyes and the older with blue eyes and light-blond hair.

Głąb and colleagues arrived at these physical descriptions using a new forensic DNA sampling test that could shed...

In 2011, Walsh and colleagues published a description of an earlier version of the assay, called IrisPlex, that only predicted eye color (Forensic Science International: Genetics, 5:170-80, 2011). In January, they described how HIrisPlex identification of hair and eye color could work as an even better tool for identifying missing persons and pursuing leads in criminal cases (Forensic Science International: Genetics, 7:98-115, 2013). But while proving HIrisPlex’s versatility, they stumbled upon the tool’s archaeological potential.

The scientists had already validated their systems by testing DNA from living people and finding that it could accurately predict their eye and hair color, but they wanted to push the tool further. “In forensics it is important to know that the system that is used routinely is very sensitive, very robust, reliable,” says codeveloper Wojciech Branicki of the Institute of Forensic Research and Jagiellonian University in Krakow. “I think the best way to show this is to find some extreme samples.”

Branicki, who deals with modern bone samples in his casework, found his extreme samples in his colleague Głąb's medieval skeleton collection. He proposed the idea of testing the skeletons to Manfred Kayser, a forensic geneticist also at Erasmus MC University Medical Center Rotterdam and lead researcher of the HIrisPlex team, and they selected remains from a wide range of ages and preservation conditions.

“I was surprised it worked so well,” Kayser admits. “With very few exceptions, we could analyze all these samples.” In the end the scientists were able to predict eye color for all 26 samples and hair color for 23 out of 26 samples, including contemporary corpses and bones from forensic casework, unidentified bones from the World War II prison camp at Poznan, and the three medieval samples. They were also able to correctly predict the eye color of Poland’s General Władysław Sikorski, who died in 1943, and was known to have had blond hair and blue eyes.

Of the three samples that didn’t track all 24 of the sequence variations that HIrisPlex assays, two were contemporary remains and the third was one of the two medieval noblemen, illustrating that, for HIrisPlex to work, age is often less important than storage conditions of the genetic material.

Though the kit has a long way to go before becoming widely adopted by forensic scientists working within the judicial system, Branicki says that HIrisPlex has already been used in Poland to help identify the remains of a woman. He could not give further details about the circumstances of her death because the case has not yet been closed, he said. HIrisPlex is also currently being used in the investigation of a murder case and a rape case in Poland.

Appearance has been predicted from DNA sequencing information before. For instance, scientists previously predicted that Neanderthals had light skin and red hair by looking at a variant of the gene MC1R, and Branicki and colleagues analyzed the remains of astronomer Nicolaus Copernicus, who died in 1543, to predict that his eyes had been light-colored from a single variant in his HERC2 gene.

Nevertheless, HIrisPlex is the “most comprehensive” and easiest assay yet available, says Michael Hofreiter, an evolutionary biologist at York University who was not involved in the test’s development. HIrisPlex simultaneously targets a broad array of relevant single nucleotide polymorphisms and gives a framework for interpreting them.

Kayser says HIrisPlex has potential for helping to explain how and when blue and green eyes and light hair evolved in Europe. Hofreiter suggests a version of the tool could also shed light on the appearances of distant European ancestors, such as the Etruscans or Celts. “We have no idea what they looked like,” he says.

PhD student Walsh says that deciding to look at the medieval bones “was more curiosity than the logical way of looking at what’s next,” but that it has opened up promising new uses for HIrisPlex. “We’ve been working so hard in getting the forensic community to use our tools,” she says. “It’s nice to look at it from another angle.”