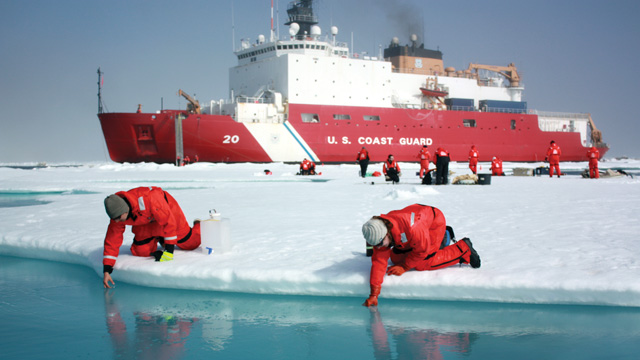 ICY DEPTHS: Jens Ehn (left) of Scripps Institution of Oceanography, and Christie Wood (right) of Clark University, scoop water from melt ponds on sea ice in the Chukchi Sea in 2011. The water was later analyzed in an icebreaker’s onboard science lab.© NASA/KATHRYN HANSEN Spirits were high on the overcast morning of June 25, 2011, when an interdisciplinary team of 47 scientists, funded by NASA and led by Stanford University biological oceanographer Kevin Arrigo, embarked on an arduous 5-week voyage to the icy Chukchi and Beaufort seas to study the effects of climate change in the Arctic. For the second consecutive summer, the Impacts of Climate on Ecosystems and Chemistry of the Arctic Pacific Environment mission—ICESCAPE for short—would spend the early summer navigating the polar waters to collect ice and water samples, hoping to shed light on the changing physical, chemical, and biological properties of the Arctic Ocean....

For Arrigo and his team, it was also a rare opportunity to study the Arctic marine ecosystem firsthand. “It’s so hard to get up there, and so few people do,” says Sam Laney, a marine biologist at Woods Hole Oceanographic Institution who participated in the study. “It’s a hard place to work in, and it’s very unforgiving.”

Sampling during the previous year’s expedition had turned up some intriguing finds. Just a few days after departing from Dutch Harbor on southwestern Alaska’s Amaknak Island in the Aleutians, the team’s vessel, a huge US Coast Guard icebreaker called the Healy, had hit an unexpectedly large phytoplankton hotspot in the Chukchi Sea, just off the Bering Strait. Fluorometers, which measure the amount of chlorophyll in the water, recorded concentrations of around 50 micrograms per liter—making it one of the densest phytoplankton blooms ever recorded, Arrigo says.

Under the ice, people never really assumed there would be a big bloom at all because the light levels never really get up that high.—­Sam Laney Woods Hole Oceanographic Institution

One of the 2011 expedition’s first orders of business was to return to that same spot to study it in more detail. But after taking a short detour to help rescue a boat in distress nearby, the ICESCAPE crew arrived at the Chukchi hotspot 10 days later than they did in 2010 and found that chlorophyll concentrations were nowhere near the levels of the previous year, perhaps because it was past its peak.

The Healy crew pressed on further north to sample the waters under ice cover. After cutting through more than 30 miles of Arctic Sea ice, things started to get really interesting.

The Healy had entered an area of heavy ice cover, and Arrigo was monitoring seawater conditions when he noticed that the fluorometer lit up. The instrument was recording chlorophyll levels that were “much bigger than when we were on open water,” Arrigo recalls. “We thought this was odd, but we figured that the numbers would start to drop any minute.”

The ship stopped so the crew could collect samples of the ice and water. “It was like pea soup,” Arrigo says. “Visibility was less than a meter, and it became clear that we were witnessing something truly unusual.” 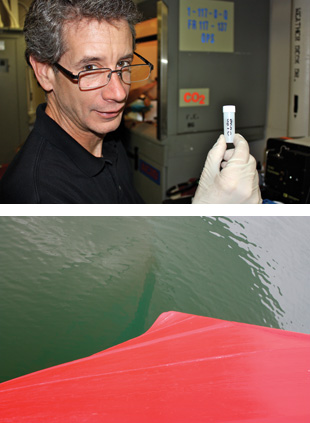 GREEN TEAM: ICESCAPE’s chief scientist Kevin Arrigo (top) analyzes the chlorophyll content of the final samples pulled from the greenish, shallow shelf water (bottom) collected during the 2011 mission.© NASA/KATHRYN HANSENAs they continued to crash through the ice, the chlorophyll readings increased to such levels that the group decided to turn around in order to sample the area in more detail. “What was surprising was that the blooms under 0.8–1.2 meters of ice were vastly greater than the blooms in open water,” Arrigo says. The bloom seemed to extend more than 96 kilometers laterally beneath the ice, and at its thickest was between 30 and 70 meters deep. “This is an odd thing, since the phytoplankton biomass was so high and absorbs so much light that no light should have penetrated past about 10 meters,” Arrigo explains. “We still don’t know how they manage to grow at depths greater than that.”

“Under the ice, people never really assumed there would be a big bloom at all because the light levels never really get up that high,” Laney says. But in the late spring, snow melts into ponds, thinning the underlying ice and creating “skylights” that can let sunlight through while partially blocking harmful UV rays, the team explained in a Science paper published in June 2012.

However, whether this occurred as a result of the thinning Arctic Sea ice and the changing global climate, or whether it is a common phenomenon in the polar waters remains to be determined.

“The Arctic is very undersampled,” Laney says. “There are very few ships that can go where we went and take the measurements we did.”