When high school student Jade Greenberg heard about what was happening to America’s bee populations, she decided to take action. Last year, Greenberg, then a junior at Pascack Hills High School in New Jersey, learned from a local beekeeper about a tiny reddish-brown mite that is posing a serious threat to the honey bees (Apis mellifera) used across the US for pollinating various crops. But what began as a school project to build a hive that might help boost bee health soon turned into a collaboration with two tech companies to use artificial intelligence (AI) and tracking systems to tackle the problem.

The varroa mite (Varroa destructor) was brought over to North America from Southeast Asia decades ago and has been decimating not only colonies tended by beekeepers, but also feral colonies—those that were started in...

“Even if we solve the other problems contributing to honey bee loss, like pesticides and poor nutrition, colonies will still be lost if varroa is not under control,” says honey bee researcher Gloria DeGrandi-Hoffman of the US Department of Agriculture’s Agricultural Research Service (USDA-ARS) Carl Hayden Bee Research Center in Tucson, Arizona.

There are hints that the practice of beekeeping itself may be contributing to the problem. DeGrandi-Hoffman and her colleagues, for example, recently found that the current commercial beekeeping practice of preventing swarming—when a queen bee and a group of worker bees leave their original colony to form a new one—may have exerted selection pressure on the mites to find new ways to disperse among bee colonies (Environ Entomol, 46:737–46, 2017).

What began as a school project soon turned into a collaboration with two tech companies to use artificial intelligence to tackle the problem.

Greenberg was interested in the role of another aspect of beekeeping: hive design. Feral bees typically nest in tree cavities or other structures, forming layers of wax comb to fill the available area. By contrast, the most widely used manmade beehive in North America, the Langstroth hive, is essentially a stacked, wooden file cabinet with removable frames on which bees build their combs, making it easy for beekeepers to collect honey and monitor the colony’s health.

Greenberg wondered if the hive design could be affecting the bees’ susceptibility to mite infestations. “There is research on environmental factors, such as where the bees forage and how they are affected by pesticides,” she says. “But there is very little information on whether or not the shape of the commercial hive has an effect on [mite infestation rates].”

Taking advantage of a school science fair as an occasion for the project, Greenberg set about designing her own beehive, based on the so-called Sun Hive. Invented in the 1980s by Günther Mancke, a German sculptor who studied natural beehives, Sun Hives “are handmade hives and not commercially viable,” Greenberg says. “I decided to riff off of Mancke’s design and make something that could be both commercially viable and also healthier for bees.”

Greenberg incorporated sensors to monitor hive weight, temperature, and humidity, along with video monitoring technology, while still retaining the necessary features for commercial beekeeping, such as removable frames. After a few months of honing the design on the computer, Greenberg was considering building a prototype of the 42-liter structure using a 3-D printer when her father, a solutions engineer at artificial intelligence company Kinetica, made a suggestion. 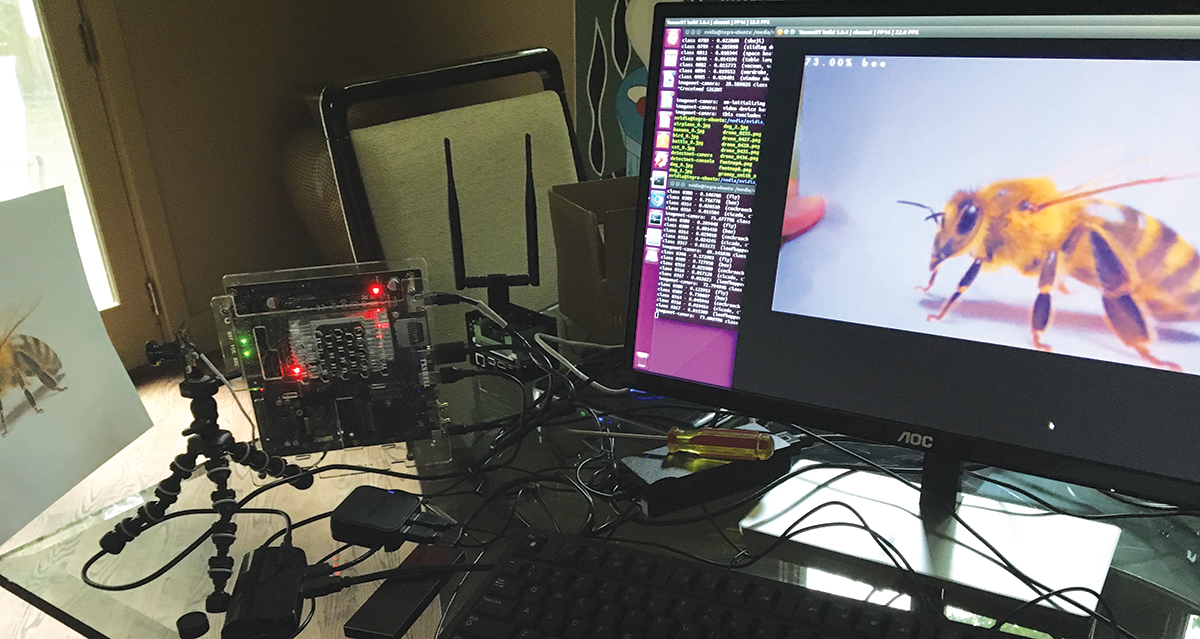 Kinetica uses AI and other technologies to analyze extremely large data sets on everything from financial markets to the movements of fleets of trucks as they drive around the US. Jonathan Greenberg had told colleagues about his daughter’s project and, to his surprise, found they were keen to get involved. One of those colleagues was Jacci Cenci, a solutions architect at NVIDIA, a tech company focused on AI and graphics. Cenci offered to mentor Greenberg on machine learning technologies and provide her with real-world data to analyze bee health.

Working with a beekeeper in California, the team placed sensors on a single Langstroth hive containing a healthy bee colony to monitor its temperature, humidity, and weight, and installed a camera to capture images. The researchers then created an analytical tool using Kinetica technology to detect bees in the images and to analyze environmental factors such as temperature, humidity, and weather conditions that might be contributing to varroa mites’ ability to infect the colony. The effort was an initial proof of concept, says Jonathan Greenberg. “This was about figuring out how the technology can work to more effectively monitor parasites for Jade’s hive experiments in the field.”

The group also came up with a better way to monitor mite infection in honey bee colonies. Usually, “the way beekeepers assess whether there is a mite infestation is invasive,” says Samuel Ramsey, a research entomologist at the USDA Bee Research Laboratory in Beltsville, Maryland, who was not involved in the project. “We take 300 bees, put them in a jar, sprinkle powdered sugar on them, shake the jar, and count how many mites fall off of the bees.”

Instead, Greenberg’s team captured images in the California hive every 10 seconds and then used NVIDIA’s machine learning to detect the presence of varroa mites on bees. To do this, the team used individual frames from videos of the healthy beehive, and from a different beehive where the varroa mite had taken up residence, to train a computer algorithm.

The data collection and analysis tools that Cenci, Greenberg, and their colleagues built are all still in the prototype stage. But Ramsey says that it has been a step toward figuring out whether Langstroth hives contribute to the mite infestation problem—and if Greenberg’s hive design could aid the bees in staving off the mites with their natural defenses. “Designing a better honey bee hive would be wonderful because we are putting these bees in an unnatural situation, the Langstroth hive,” he says. “It’s an old technology that wasn’t designed to address current issues like mite infestation.”

The project won the engineering category at the Nokia Bell Labs North Jersey Regional Science Fair, and Greenberg was a finalist at the Intel International Science and Engineering Fair. She says she now hopes to measure physical properties such as ventilation and heat distribution in her prototype hive, in the Langstroth hive, and in wild beehives to understand how hive design might help or hinder mite infestations.

“I’m always excited when younger students bring passion and a youthful, new way to look into established systems,” says Ramsey. “That is certainly a way to make sure there is progress.” DeGrandi-Hoffman agrees. “It’s great to see young students with enthusiasm and confidence to tackle complicated problems with creative solutions.”

For Greenberg, the biggest surprise was how few researchers are studying biological problems such as honey bee health from an engineering perspective. Her solution? To major in bioengineering when she starts university this fall.