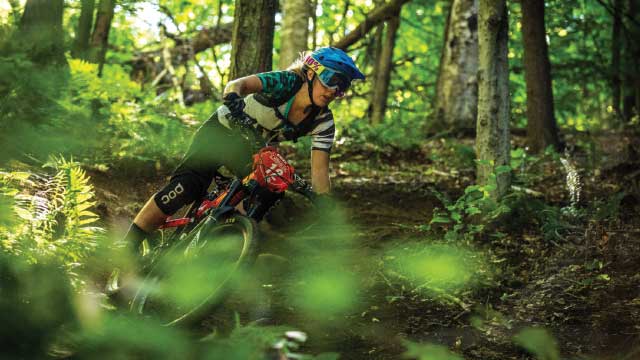 Genomicist Lauren Petersen has been racing mountain bikes since she was 14 years old. But throughout her teens she battled chronic Lyme disease, suffering recurring bouts of illness that sometimes kept her off her wheels. “I’d feel like crap for a month or two, and then the antibiotics would make me feel like crap, and then I’d rebound a little bit and be okay for a while,” she recalls. “It was continuous peaks and valleys.”

For seven years, Petersen’s doctors prescribed her a barrage of antibiotics. In 2003, at age 21, she took two or three broad-spectrum antibiotics at a time for an entire year, a regimen that she says seemed to finally kick the Lyme. But she wasn’t well. “Even when I wasn’t sick anymore, I had chronic fatigue and bad stomach issues.”

In 2013, she attended a Gordon Research Conference where microbiome researcher Rob Knight of the University of California, San Diego (UCSD), gave a talk about the American Gut Project, which invites people to send in stool samples for analysis. The project combines data from those samples with the participants’ answers to survey questions about disease history, lifestyle, diet, and more, to determine the most important factors in shaping a person’s microbiome. “As soon as Rob got there and gave his spiel, and said, ‘Get your own microbiome sequenced for $89,’ I signed right up.”

Petersen recalls the test results she got back later that year: “I had a horrible microbiome—very, very bad.” All those years on antibiotics, she says, “I had no idea that essentially my entire gut microbiome was being wiped out.” Not only did she lack many of the beneficial bacteria commonly harbored by people without symptoms of disease, but the results also showed that her gut had been colonized by several pathogenic strains that she’d worked with in her lab.

Petersen determined a fecal transplant was the way to restore a healthy microbiome. But because she wasn’t infected with a nasty pathogen called Clostridium difficile, for which fecal transplant had become accepted therapy, she couldn’t find a doctor who would agree to do the procedure. So in February 2014, with the support of her family, she recruited a donor and did it herself. “I just did it at home. It’s not fun, but it’s pretty basic. It costs like six bucks to do.” (The $6 being for the drugstore enema kit.)

The do-it-yourself solution worked. “Within two months I was a new person,” Petersen says. “I had no more fatigue. I could ride my bike hard three days in a row, no problem.” She started racing four months after her fecal transplant, and was winning races at the pro level soon after that. “Everything changed,” Petersen says.

After defending her doctoral dissertation, Petersen started a postdoctoral fellowship in George Weinstock’s microbiome research group at the Jackson Laboratory for Genomic Medicine in Farmington, Connecticut. When Weinstock asked what she wanted to work on, she told him she wanted to study athletes. Not only was Petersen an athlete herself, she had intentionally selected an athlete to serve as her fecal donor. And she wondered, “If I had done the fecal transplant with a nonathlete, would I feel this good?” (She had her microbiome reanalyzed after the transplant, and also sent in a sample from her donor; the microbiomes lacked pathogenic strains, and the beneficial strains they contained were identical.)

Petersen quickly rounded up 35 of her cyclist friends to participate in the project, aptly dubbed the Athlete Microbiome Project. She had each submit stool samples, from which she sequenced the 16S RNA to identify the species that made up each person’s gut microbiome and examined the mRNAs present to get a sense of how the individuals’ microbiomes might be functioning differently.

Petersen found that athletes had more diverse microbiomes than healthy nonathletes. In particular, many of the cyclists had an abundance of Prevotella bacteria, a genus that is often absent from typical American or European gut microbiomes. The cyclists also had a higher abundance and activity of Methanobrevibacter archaea, which consume by-products of bacterial fermentation of complex carbohydrates. “It kind of removes [the by-products] from the community, which allows your entire gut microbiome to work more efficiently,” Petersen explains. She’s submitted the results for publication, and the manuscript is currently under review.

Prior to Petersen’s research, scientists in Ireland published a pair of papers on professional Irish rugby players at the request of the Irish Rugby Football Union. Like Petersen, Orla O’Sullivan, a computational biologist at the Teagasc Food Research Centre in County Cork, and her colleagues found significantly more-diverse microbiomes among the athletes (Gut, 63:1913-20, 2014). They did not, however, report the presence of any Prevotella, Petersen notes, “but they did have lower Bacteroides and higher Akkermansia, which we also find in our athletes.”

This year, O’Sullivan and her colleagues published a follow-up study using metabolic phenotyping and metagenomic analysis to further explore the functional impacts of these microbial differences (Gut, doi:10.1136/gutjnl-2016-313627, 2017). But it’s still too soon to say why the differences exist. The amount of protein eaten and the level of creatine kinase, a proxy for exercise, were the only two factors that correlated with microbial diversity. “It’s an adaption to a lifetime of this kind of training that’s maybe having the effect. . . . The diets definitely have a huge role to play in this [as well],” speculates O’Sullivan, who wants to expand the study into other sports. But, she adds, “it’s all associations; we haven’t figured out the cause.”

Under the direction of Embriette Hyde, a research scientist in the Knight lab at UCSD, the American Gut Project is also probing the link between the microbiome and athletics. So far, Hyde and her colleagues have sampled about 80 collegiate athletes at the university, and Hyde says they are beginning to branch out to club sports as well. Petersen is also extending her research. She’s got stool samples from more cyclists, collected daily starting a day or two before a race and ending two days afterward, “to see a glimpse of the microbiome in the rested state, during race, and during recovery,” she says. The analysis is just beginning, she adds. “I can’t tell you too much, but there is some really cool data.”

Correction (June 2): The image credit on this story has been corrected. The Scientist regrets the error.