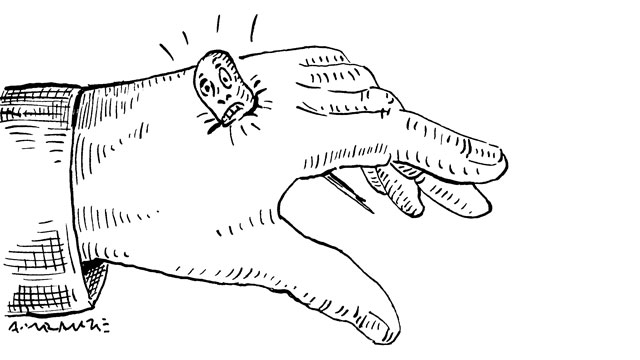 ANDRZEJ KRAUZEWhen retired inventor and engineer Thomas Fritz decided 2 years ago to remove a dead crab apple tree from his Indiana property, it seemed like a simple enough project. The tree “wasn’t tall for a crab apple tree, maybe 10 to 12 feet. . . . I had the chain saw warmed up, [and] thought ‘I’ll take him out now,’” Fritz remembers. But as he was dragging some of the spiny branches away, the 71-year-old became ensnared and fell, spearing his hand.

“It was a pretty good-sized puncture—about the size of a number two yellow pencil,” noted Fritz, who had been a volunteer firefighter and took advantage of his EMT training to bind his wound before finishing his pruning. But when Fritz’s hand began to swell, his doctor drew some fluid and put him on a “cannon of antibiotics.”

Technicians at the local lab couldn’t identify the...

Fisher knew that his University of Utah colleague Colin Dale, who first described the genus Sodalis in 1999, was studying how S. glossinidius interacts with its tsetse fly hosts, but “there wasn’t much indication up front that this [new bacterial species] would be the Rosetta Stone it turned out to be,” says Fisher.

Symbiotic bacteria differ from their free-living brethren in having much smaller genomes. In fact, the genomes of some endosymbionts are the smallest recorded, as the bacteria have jettisoned nonessential genes. How, exactly, different insect species acquire seemingly related endosymbionts is debated. It’s possible that they’re passed between different species by parasitic wasps, although Dale counters that most parasitoids stick to related species. Endosymbiont transfer would seem to require intimate contact, but insects as disparate as tsetse flies and weevils having sex is unlikely, not to mention that it would be “a sight to behold,” Dale quips. Instead, he subscribes to the popular hypothesis that insects pick up their microbial passengers while acting as vectors shuttling plant or animal pathogens between hosts, and then pass the bacteria to their offspring.

The new bacterium, dubbed HS by Dale and his team, gave researchers a window into what an endosymbiont ancestor might look like, says John McCutcheon, a microbial geneticist at the University of Montana. That an endosymbiont relative existed as a free-living microbe “wasn’t shocking, but there hadn’t really been examples before,” he explains.

To get a sense of the evolutionary trajectory from HS-like ancestors to successful insect mutualists, Dale and graduate students Kelly Oakeson and Adam Clayton compared HS’s genome to those of two related symbionts: Sodalis glossidinius, a mutualistic symbiont of disease-transmitting tsetse flies, and the grain weevil bacterium Sitophilus oryzae primary endosymbiont (SOPE). They found that although the genomes of S. glossinidius and SOPE were significantly smaller than HS’s, the DNA of each contained “near-perfect” matches to sections of the HS genome. But the two endosymbiont genomes had different missing or inactivated genes, suggesting that each had evolved independently from an HS-like ancestral strain. “It’s a well-established fact that mutualistic symbiont genomes have undergone degeneration,” says Dale. “We had predicted this exact situation.”

The research also provided clues to the shrinking process, says Rita Rio, a microbiologist at West Virginia University. Genomes can condense by losing large chunks, or by accumulating little insertions and deletions (known as indels), she says. Dale’s research supports the idea that “it’s the little indels that happen first, and as time progresses, there’s a purging of these chunky bits,” Rio explains.

“The sequences are really close at the nucleotide level, especially SOPE,” says McCutcheon, who was impressed by how recently—about 28,000 years ago—SOPE appears to have evolved from its nonsymbiotic ancestor.

The fact that different genes were lost in the two endosymbionts demonstrates that the evolutionary process is specific to the host environment, says Dale. “So we know reductions are controlled by natural selection,” and certain genes are retained or lost in a process suited to each host, he notes. This means that scientists wouldn’t be able to successfully transfer symbionts between tsetse flies and weevils, for example, supporting the notion that Sodalis-related symbionts are independently “domesticated” and passed down through generations of the same species, not between species.

In the future, Dale and his team hope to encourage HS to take up residence inside tsetse flies—affording the scientists an up-close look at the first steps toward endosymbiosis. The work may also have real-world applications, as they hope to help researchers design tsetse fly endosymbionts that prevent the spread of disease.

“Knowing what the first steps [of evolution] are, how rapidly first genes are deleted, would be spectacular,” says McCutcheon. “They really seem to have captured the missing link.”

Fritz, for his part, has been enthusiastically following the research. He’s saved a few crab apple branches, just in case they might come in handy for future investigations, and wonders if his body still harbors a few stray HS bacteria. “It’s a good thing to do stuff like this,” he says, noting that if HS could someday help researchers design a tsetse fly endosymbiont that combats sleeping sickness, “it would be like getting Velcro out of the space program.”