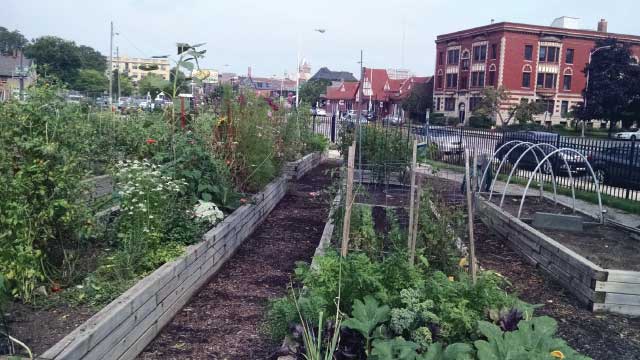 URBAN BUZZ: Community gardens, such as this one in Detroit, may serve as critical oases for city-dwelling bees.PAUL GLAUM, UNIVERSITY OF MICHIGAN

A few years ago, Paul Glaum and fellow graduate students at the University of Michigan were talking about bees. The discussion centered on imperiled native bee populations in North America, and how to support the important pollinators in urban environments. Unlike intensive farming and pesticides such as neonicotinoids, which have been repeatedly linked with alarming declines in bee abundance, urbanization has a far less obvious impact.

Whether or not urban development harms bees “has been an open question for a number of years now,” says Glaum, who is about to start his sixth year in Michigan’s ecology and evolutionary biology grad program. “There’s a wide variety of results in the literature.” While some studies report that development is linked to decreases in bee abundance and species richness,... 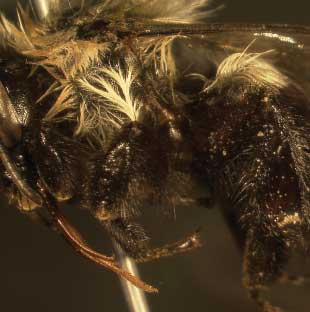 A BOMBUS AMONG US: The common eastern bumblebee (Bombus impatiens) is a frequent visitor to Detroit and other urban centers.PAUL GLAUM, UNIVERSITY OF MICHIGANDiscussing this uncertainty, Glaum wondered whether part of the problem came from lumping all pollinators, or even just all bees, into one group, thereby obscuring differences in the natural history of individual species or genera. So he and three other graduate students got together to design a study focusing on just one genus of well-studied wild pollinators: Bombus, or bumblebees. “There are certain everyday plants like tomatoes that honey bees just can’t pollinate, and we need bees like bumblebees to do the work for us,” Glaum says. Unlike honey bees, though, bumblebees build their nests directly on or just under the ground, and so could be particularly affected by impervious surfaces, such as the concrete and asphalt that blanket most cities.

The team picked five cities of varying size in southeastern Michigan, from Dexter, which gained city status in 2014, to the sprawling metropolis of Detroit, the state’s largest urban center. Through collaborations with city farm and garden owners, the group obtained permission to work at 30 sites and began recruiting undergraduates to help carry out numerous surveys. “It was an interesting exercise in learning to deal with controlled chaos,” Glaum says, adding that because bumblebees don’t forage in the rain, the students spent the summers of 2014 and 2015 at the mercy of Michigan’s climate. “We checked the weather like nervous farmers,” he says. “It was a great effort by everyone involved. Sometimes you look back and wonder how it all got done.”

By the end of 2015, the researchers had amassed bee data from the sample sites, as well as estimates of the proportion of ground covered by impervious surfaces—a standard proxy for urbanization—in the surrounding areas. Surprisingly, when they compared bee abundance to the proportion of impervious surface in the 2 kilometers around each site—the approximate bumblebee flight range—the researchers found no relationship at all. It was only when sites from Detroit were excluded from the analysis that the team detected a strong negative correlation between the two variables; as impervious surface area went up, bumblebee abundance went down (Roy Soc Open Sci, doi:10.1098/ rsos.170156, 2017).

Since this is such a human-controlled system, there might be an active role that humans can play to mitigate some of the negative effects on bees.—Paul Glaum, University of Michigan

This correlation is fairly intuitive, says entomologist Dan Cariveau, head of the Bee Lab at the University of Minnesota. “Impervious surface could really affect nesting sites,” he says. “Bees that nest above ground might be okay in urban areas, but when you have a lot of impervious surface, you lose a lot of ground-nesting habitat.” Detroit, which showed relatively high bumblebee abundances, is an anomaly, he says, adding that it will be important to understand why this city bucks the trend. “If we can document why Detroit might be doing well for bumblebees, despite having such high impervious surface, I think that really could help to figure out how to manage the landscape for higher diversity in urban sites,” he says.

Although the current study does not address Detroit’s curious bee abundance in detail, Glaum and his colleagues advance a theory in the paper they published earlier this year. “Detroit is a city with a unique physical setup,” Glaum explains. “A long period of economic hardship has left much of the land vacant.” Vacant lots in such “shrinking cities” might act as bee oases, he notes, adding that researchers need to take the heterogeneity of different cities into account when studying the ecological effects of urbanization.

Detroit wasn’t the only surprise, though. Splitting the data on bee abundance by sex showed that the negative impact of urban development in cities other than Detroit was driven almost entirely by effects on female bumblebees—males seemed unperturbed. Again, Glaum suspects the result is tied to nesting habitat. “Male bumblebees have essentially one job, and that’s to leave the nest and find a mate,” says Glaum. “They live from flower to flower, so they don’t have the limitation of having to nest underground. They just turn flowers into temporary bee motels overnight.”

“It’s an interesting result, that males are potentially less affected by the landscape,” says community ecologist Katherine Baldock, a researcher at the University of Bristol who coordinated the UK’s Urban Pollinators project a few years ago. “It’s probably, as the authors point out, because they’re using the landscape in a different way.” However, she adds, there are factors other than nesting habitat that could influence bee abundance in city environments. “One thing I think would be really interesting is: What flowers are the bumblebees feeding on in these sites?” she says. “I think there’s more to this story.”

Glaum says the team hopes to address these questions in further surveys, noting that growing the flowers that urban bumblebees frequent could perhaps help bees thrive in urban environments. “Working with farmers and gardeners in southeastern Michigan has exposed me to a very optimistic group of people,” he says. “Since this is such a human-controlled system, there might be an active role that humans can play to mitigate some of the negative effects on bees.”