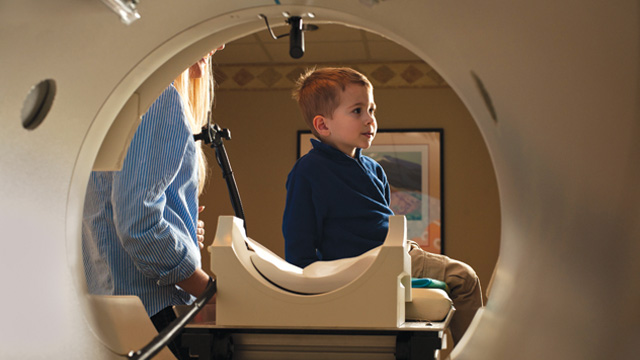 BETTER STILL: Using a decommissioned MRI machine, 4-year-old Mason Ray, of Penfield, NY, trains for the real thing before entering a study that will use an actual fMRI machine.PHOTO BY J. ADAM FENSTER, UNIVERSITY OF ROCHESTERThere’s one obvious trick to getting a good picture of brain activity from a functional magnetic resonance imaging (fMRI) scan: hold still. Adults are generally capable of following this crucial rule, but children typically find this constraint more difficult. That is, unless they’re watching their favorite TV program.

Between 2009 and 2011, cognitive neuroscientist Jessica Cantlon invited 27 children to come to her lab at the University of Rochester in upstate New York to watch a 20-minute segment of Sesame Street, with clips on math, reading, life, and more. The only catch was that the children, aged 4 to 11 years, had to watch this show inside of the big “space ship”—and...

No problem. After a trial run in a fake scanner, the participants came back for the real thing and wiggled much less than children in previous fMRI studies that had used more traditional stimuli, like images of letters or numbers. “The motion scores that we got off of this task, of watching Sesame Street, are way lower than we get off of other traditional kinds of tasks,” says Cantlon. The researchers obtained usable time-lapse scans for more than 99 percent of their subjects during the video-viewing portion of the scan, while they were forced to throw out 15 percent of the data generated during a second, 10-minute phase when the subjects were asked to complete the more traditional task of comparing two images—of faces, numbers, words, or shapes—and pressing a button if they matched. “In my previous traditional studies, I’ve thrown out 20–30 percent of the data due to movement,” Cantlon says. But here, “they’re engaged in the video, [so] they don’t move as much.”

The new approach may also yield more relevant data. In recent years, neuroscientists have been arguing “that we need to bring more naturalistic stimuli into the scanning environment,” says developmental cognitive neuroscientist Daniel Ansari of the University of Western Ontario. The data generated from such studies could more accurately reflect the way our brains work in real life. “As far as I know,” he adds, “this work is the first to apply this approach to children.” 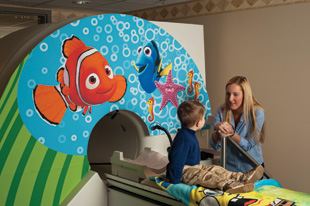 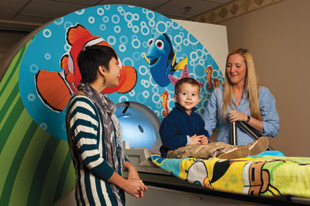 FUN AND USEFUL: University of Rochester Brain & Cognitive Sciences research assistants Courtney Lussier (top and right) and Vy Vo (left) talk with Ray before the study commences.PHOTOS BY J. ADAM FENSTER, UNIVERSITY OF ROCHESTERCantlon and then University of Rochester colleague Rosa Li (now a grad student at Duke) compared the children’s brain scans with those of adults who had watched the same Sesame Street video, and scored the activity for its similarity—assigning each child a level of brain maturity. The researchers saw that the intraparietal sulcus (IPS), a brain region previously implicated in numerical processing, functioned most like an adult brain in children that scored highly on a math test, suggesting that activity in this part of the brain could predict a child’s mathematical abilities.

“That was pretty exciting because it confirmed for us that this region of the brain that people have been pursuing for a long time as important for mathematical and numerical processing is actually a region that seems to be important for how children perform on a math test,” says Cantlon. She and Li also found that brain maturity in an area involved in speech production, called Broca’s area, could predict how well the children did on a verbal IQ test (PLOS Biology, 11:e1001462, 2013).

But, the study raises more questions than it answers. “The one thing that is always tricky about any brain imaging work is understanding the mechanisms—understanding what it is that mediates the relationship between brain activation and performance,” says Ansari. “And what is the causality here? That’s difficult to understand as well. After all, we’re dealing with correlations.”

Nevertheless, the studies’ novel methodologies are a step forward for the field, researchers agree. The brain maturity measure, for example, could have broad applications in the analysis of brain imaging data, says Melissa Libertus, a post­doctoral fellow at Johns Hopkins Univer­sity, who studies brain activity in children and infants. “The method is something that can be used . . . not just for children and adults, but for looking at patient populations or the other end of the developmental spectrum.” Perhaps, Libertus suggested, researchers could devise some measure of mental decline, and even dementia, comparable to Cantlon and Li’s brain maturity index by comparing younger and older adults.

“That’s a new idea, a kind of an interesting one,” agrees Ansari. Having the children view Sesame Street while in the scanner is also a technique that could help move the field forward, Libertus says. “The nice thing about it is that this naturalistic viewing is something that can also be used in very young children that are often understudied because it’s hard to come up with meaningful tasks.” And the researchers must have been very brave to propose this technique, Ansari adds. “You need to have guts to do this kind of stuff,” he says. “In experimental work, we’re so focused on very tightly controlled experimental situations; watching a movie is far from controlled.”