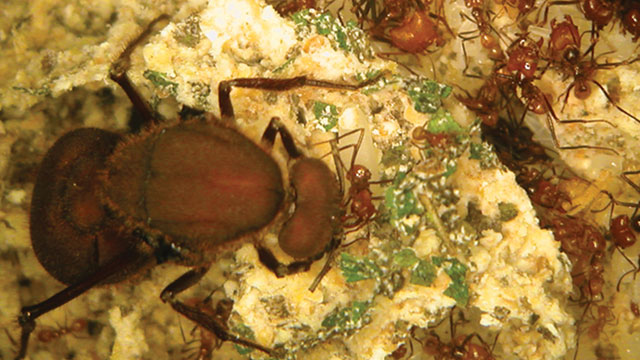 BIOREFINERY? Leafcutter ants tend to their fungal gardens, which may inform the production of biofuels used by humans.MICHAEL POULSEN (UNIVERSITY OF COPENHAGEN)

In a humid room at the University of Wisconsin–Madison (UW), large Tupperware boxes hold thick beds of gray fungi, pockmarked with holes and crawling with leafcutter ants. The boxes are home to colonies of two leafcutter species, Atta cephalotes and Acromyrmex echinatior, brought back from the tropical forests of Panama and Costa Rica by bacteriologist Cameron Currie and his colleagues, who study these insect agriculturalists and the fungus gardens they tend.

Leafcutter ants create the largest colonies of any ant, with some comprising 8 million individuals. To sustain themselves, they march across the forest carrying vast quantities of leaves, piece by piece, in great green convoys, back to the nest. The ants use the leaves as fertilizer to cultivate gardens sown with bacteria and...

But these fungus gardens are more than just fascinating examples of insect agriculture and symbiosis; they could also provide a model for the more efficient production of renewable biofuels. Currie and his team are using genomic and proteomic techniques to unravel the molecular secrets underlying this ancient symbiosis between fungus, bacteria, and ants. In the process, they are identifying novel enzymes that could be integrated into industrial processes to help convert abundant nonfood biomass into ethanol.

“This symbiosis has evolved over millions of years,” says Frank Aylward, a graduate student in Currie’s lab. “So it’s a great place to look for enzymes that could be useful in biofuel production.”

But the process by which the ants’ fungus gardens convert biomass into nutrients is not well understood. It has long been assumed that L. gongylophorous drives the degradation of otherwise indigestible cellulose, but some researchers aren’t convinced, because the fungus can’t always grow on cellulose in pure culture.

“This symbiosis has evolved over millions of years. So it’s a great place to look for enzymes that could be useful
in biofuel production.—­—Frank Aylward, University of Wisconsin–Madison(UW)

To address this issue, a team led by Currie sequenced the genome of L. gongylophorous. The sequences revealed around 200 genes potentially encoding lignocellulases—a class of enzymes that break down woody, or lignocellulosic, biomass. (Appl Environ Microbiol, 79:3770-78, 2013) “That showed that the fungus has the capacity [to break down plant biomass],” says Aylward, the first author of the paper. But just because the fungus has the genes doesn’t mean that those genes are expressed, he adds.

So Aylward and colleagues also performed metaproteomic analyses of samples from the fungus gardens of both leafcutter species, and confirmed that 145 lignocellulases were actually present. “That’s pretty definitive proof that the fungus is the primary driver of biomass breakdown,” says Garret Suen, a bacteriologist at UW and a coauthor of the study. Indeed, very few of the lignocellulases appeared to come from the bacteria that live alongside the fungus, though the microbes play their part in the symbiotic relationship by fixing nitrogen for the fungus. The bacteria may also help the fungus access cellulose by breaking apart plant polymers that encase it, such as hemicellulose, adds Suen.

“Describing these dynamics at the molecular level offers new insights into the contributions made by the fungus to plant degradation,” Michael Poulsen, who studies insect-fungus symbioses at the University of Copenhagen, writes in an e-mail to The Scientist. “[The study] adds an important piece of the puzzle of our understanding of one of the key features that has made this ancient symbiosis extremely successful.”

The identification of enzymes capable of degrading lignocelluloses could also be a boon for the biofuels industry. Biofuel companies already use enzyme blends to break down starches from plant biomass, most commonly corn, into sugars to be fermented into ethanol. But the enzymes currently available can’t break down tough-to-degrade molecules such as lignocelluloses on an industrial scale.

Armed with this suite of new enzymes capable of breaking down lignocelluloses, Aylward says biofuel companies may be able to use the leaves and stalks of the corn plant—rather than just the cobs, which inflates food prices—or other nonfood crops and waste products, such as grass, sawdust, or leaf litter. That would make ethanol production far more sustainable.

The idea is that the genes coding for these enzymes in the fungus gardens of leafcutter ants can be mass-produced in the lab by inserting them into E. coli or yeast, then used to break down feedstocks that require less land, fewer resources, and that don’t compete with food crops.

“This is a highly evolved system, so the hypothesis is that the enzymes would be highly tuned to break down plant biomass,” says Suen. “If we purify all of the enzymes we’ve identified, we should, in theory, get a highly valuable mix.”

But first the team has to work out just how effective these new enzymes really are, and, since they work synergistically, to test countless combinations. Aylward himself is moving on to the Massachusetts Institute of Technology, where he will study microbial oceanography. But Currie’s lab will carry on with characterizing the new lignocellulases, teasing apart the synergistic interactions, and finding the optimal combinations.

By analyzing samples from different strata within the fungus gardens, the team also demonstrated that the fungus produces different sets of enzymes at different stages in the degradation process. “I think that could be important for biotech applications,” says Aylward. “A lot of people are using one enzymatic cocktail at the moment; perhaps we need to start thinking about doing it in stages.”

To make matters even more complicated, researchers will also need to take into account the role of bacteria. “It could be that bacteria are producing some enzymes that enhance the efficacy of the fungal enzymes,” says Aylward. “Integrating the bacterial component is likely to be important, because the synergism we see with leafcutter gardens is on the level of the entire symbiosis.”