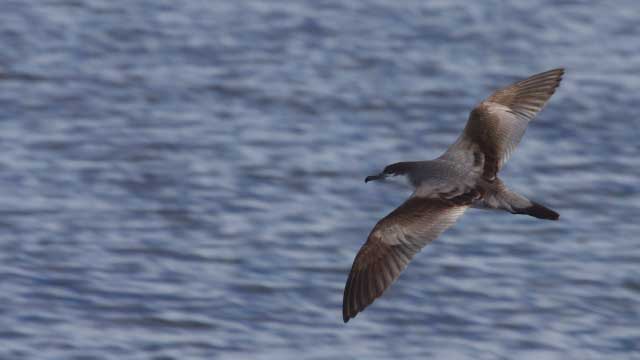 I SPY: A Buller’s shearwater (Puffinus bulleri) like this one pushed birder John Weigel beyond the prior American Birding Association record, set in 2013.© GREGORY "SIOBIRDR" SMITH/WIKIMEDIA COMMONS

It’s been three years since Neil Hayward, a Boston-based biotech consultant on a sort of sabbatical from working life, broke a 15-year-old North American birding record. On December 28, 2013, with just three days left in his so-called big year, Hayward spotted a great skua out over the Atlantic Ocean, making the bird the 749th species he had seen and photographed that year—one more than revered birder Sandy Komito tallied in 1998.

It was a spectacular eleventh-hour finish to a year spent crisscrossing the continent. But this year, it would take only seven months for birders to best Hayward’s record. In July, a gray partridge in Washington State and a Buller’s shearwater in California gave birder John Weigel...

Weigel, a record-holding bird spotter in his adopted country, knew from the beginning of the year that weather patterns were working in his favor. “It became apparent there were super numbers of rarities coming into the southern part of the U.S. near Mexico and Asian migratory species coming into Alaska,” he says. “That’s when I realized I could break that record . . . if the El Niño hangs in.” So Weigel set out to take on North America—specifically, a region designated by the American Birding Association (ABA) that stretches from Alaska to Florida and encompasses everything in between, plus 200 miles offshore.

Since surpassing Hayward, Weigel has added at least a dozen more birds to his list, with months to go before the year is up. When I caught up with him over the phone late this summer, he was getting ready to head out on a couple of boat trips off the coast of California to see if he could sight a blue-footed booby. (He did.)

If there was no one else this year, I’d be having so much fun. But I can’t get through this year and be a bird short, can I?—John Weigel, birder

Even more remarkable than Weigel’s accomplishments is the fact that he’s not alone. There is another birder—a retired medical-staffing executive and nudist known by his pen name, Olaf Danielson—who has kept pace with Weigel. Aiming to break big year birding records requires months of travel—by boat, plane, car, and foot—oftentimes on short notice. “It’s been a hideously expensive and difficult thing to get ahead of this guy,” says Weigel.

Weigel grew up in Colorado, and his accent retains much of his American roots, while words such as “life” and “time” bear the vocal lilt of Aussies. He owns a zoo, the Australian Reptile Park, about an hour’s drive from Sydney, and he uses his birding efforts to raise funds for a Tasmanian devil breeding program called Devil’s Ark.

Danielson has been birding since his childhood in Wisconsin. “My second word was chickadee,” he says. In 2013, Danielson set the record for the most bird species spotted while nude—594. “That was my weird year,” he says, which included a frigid excursion hiking naked on Attu—the westernmost island of the Aleutians and a famed birding site.

Danielson had planned to devote 2016 to breaking Hayward’s 2013 record. His business partner had bought him out, his grandmother fell ill, and he turned 50. It seemed like the right time to take on a big year. “I hadn’t set a plan for competing with anyone else,” he says, and he maintains that his efforts are not directed at out-birding Weigel. Still, he’s publicly questioned Weigel’s methods, writing on his blog in May: “Like the Devil, the devilbirder is everywhere all the time.”

There are few people who log more than 700 bird species spotted in any given year. Not only does it take exceptional birding skill, but an enormous investment in time and money. Birders are sometimes chasing after a single individual that may only stick around in one area for a few days at a time.

“Some weeks you’re lucky,” says Danielson, “other weeks you fly all the way to California to see a marsh sandpiper—the only one this year in North America. But you should have been there yesterday.” After missing the sandpiper, Danielson drove “helter skelter” to San Francisco Bay and missed another bird, then flew overnight to Key West, only to be a day late again. “There’s nothing worse than dragging all over the place to see a bird, and you miss it.” He estimates that by the end of the year he’ll have spent about $75,000 chasing birds.

Those unfortunate episodes aside, part of what has made 2016 so successful is that some of these fleeting species have stuck around. Tufted flycatchers, for instance, have spent half the year in southeastern Arizona, when normally they pop up from Mexico only momentarily, says Nate Swick, manager of the American Birding Association’s blog. He says this is the first year four people—the other two being Christian Hagenlocher and Laura Keene—will break the 700 mark.

Along with the weather, a few other developments have helped propel birders to this elite echelon. For one, the ABA list of species has expanded based on DNA analyses that have split a single species in two (and this has happened a few times). Danielson says birders have also seized upon cruise ship excursions up the Pacific Coast, helping add offshore species to their sightings.

Online resources have also given a huge boost to birders. In particular, eBird, a website run by the Cornell Lab of Ornithology and the National Audubon Society, allows birders to post their sightings in an easily searchable format. “We figured out very early on that birders plus competitive spirit equals more data,” says Brian Sullivan, the eBird project leader. “The data is so dense in eBird now that you can get a likelihood of seeing a certain species at a certain site for every week of the year.”

The goad of competition cannot be discounted in this year’s race for a new record. For Weigel, it’s no longer about beating Hayward, or going beyond what Sandy Komito would have tallied had he been working with the ABA’s 2016 list of species (about 765, by Weigel’s count). It’s about beating Danielson. “It’s a shame,” Weigel says. “If there was no one else this year, I’d be having so much fun. But I can’t get through this year and be a bird short, can I?”