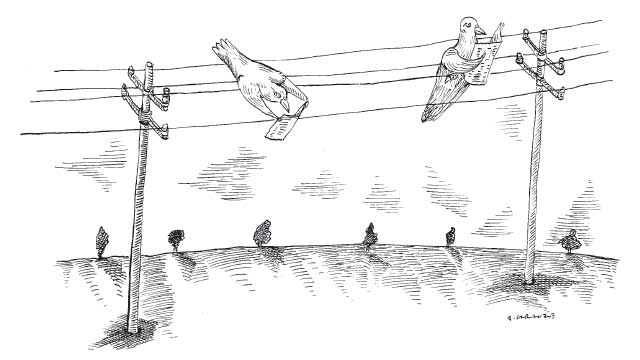 After completing an undergraduate psychology course taught by Michael Colombo at the University of Otago in New Zealand, Damian Scarf was hooked on animal cognition. Colombo told Scarf how he and other behavioral researchers were demonstrating that nonhuman animals seemed to possess cognitive abilities that researchers had previously considered to be exclusively human. “Testing these human-unique abilities just seemed awesome, so I switched from zoology to psychology the following year,” Scarf recalls.

Scarf completed his PhD work in Colombo’s lab and is now a lecturer at the University of Otago, where he continues to test the ability of nonhuman animals to display traits supposedly unique to humans. Most of his work involves birds, which have repeatedly upended the concept of human uniqueness. For example, scientists have thoroughly documented the ability of Caledonian crows to use tools, a skill long believed to be employed only by humans. Similarly,...

This year, Scarf, Colombo, and their colleagues tested pigeons’ ability to recognize patterns of letters that appear in the English language. Nearly every day for two years, Scarf trained four pigeons. He would place the birds in a box with a touch screen, and then present the animals with either a real or fake four-letter word, along with a star below the letters. If the word was real, the birds were to touch it with their beaks; if it was fake, they were to touch the star. If the subjects answered correctly, they would get a bit of wheat. At the end of the training, the pigeons were able to recognize dozens of words—including ones they had never seen before—with about 70 percent accuracy (PNAS, 113:11272-76, 2016).

Showing that pigeons have, to a remarkable degree, the ability to process relations between letters in allowable or not allowable sequences is in my view extremely interesting.—Alex Kacelnik,
University of Oxford

“It’s quite a novel finding,” says Alex Kacelnik, who studies comparative cognition at the University of Oxford. “Showing that pigeons have, to a remarkable degree, the ability to process relations between letters in allowable or not allowable sequences is in my view extremely interesting.”

Understanding how birds are capable of performing such advanced mental feats has proved tricky. For instance, in 1998, Nicky Clayton of the University of Cambridge and her colleagues found that scrub jays only searched for cached perishables soon after they had stored them, suggesting the birds think about the future and plan accordingly, but exactly how they do it remains a mystery. “We know they are thinking about it, but we don’t know how they are,” says Clayton. “The way humans do it, we subjectively travel back in the mind’s eye to remember those events and subjectively travel forward in the mind’s eye to think about the future. And in doing so we’re aware of the passage of time, and we’re aware of the subjective nature of self. We don’t know if that’s how animals are doing it.”

In some cases, it’s obvious that the birds are processing stimuli differently than humans are. Just this year, for example, Kacelnik and his University of Oxford colleague, zoologist Antone Martinho, showed that newborn ducklings imprinted the relative sizes and colors of two different objects: if they saw two equal-size objects when they were born, they will follow equal-size objects, even different ones, later in life (Science, 353:286-88, 2016). “This is a quite striking ability,” Kacelnik says. Such relational concepts are thought “to be only available to highly intelligent animals with a high level of training, and these animals do it in 15 minutes after they come out of the egg.”

Indeed, no two species are the same, Kacelnik says. “All species have a common ancestor and share many common processes, but they have also evolved special abilities that are definitely not the same between species,” he says. “Humans cannot navigate home as a pigeon does, and a pigeon cannot play chess as humans do. Claiming that there are no differences is not helpful.”

But Scarf plans to keep his eyes open for more claims of such differences, and in particular, of uniquely human abilities. “There’ll be something else that comes out that people promote as [human- or] primate-unique,” he says, “and we’ll do the same thing we always do, which is try and test it in pigeons.”