From a small inflatable boat in the Rangiroa atoll in French Polynesia, Pamela Carzon got her first glimpse of the “strange” trio of marine mammals she’d been told about: a bottlenose dolphin mother (Tursiops truncatus), her seven-month-old calf, and another young cetacean that was slightly smaller and looked to be not a bottlenose dolphin at all, but a melon-headed whale (Peponocephala electra).

It was April 2015, and Carzon and a colleague at the Marine Mammal Study Group of French Polynesia, a nongovernmental organization dedicated to whale and dolphin conservation, were out for the NGO’s annual photo-ID survey, very much hoping to find animals that a former collaborator had seen while diving in the region the previous November. “[T]he sea was very calm, and there were many dolphins around,” Carzon, also a PhD student at the Center for Island Research and Environmental Observatory (CRIOBE) in French Polynesia and the École Pratique des Hautes Études in Paris, recalls in an email to The Scientist. “It took us maybe two minutes to spot them: the dark calf was easy to spot among the bottlenose dolphins.” 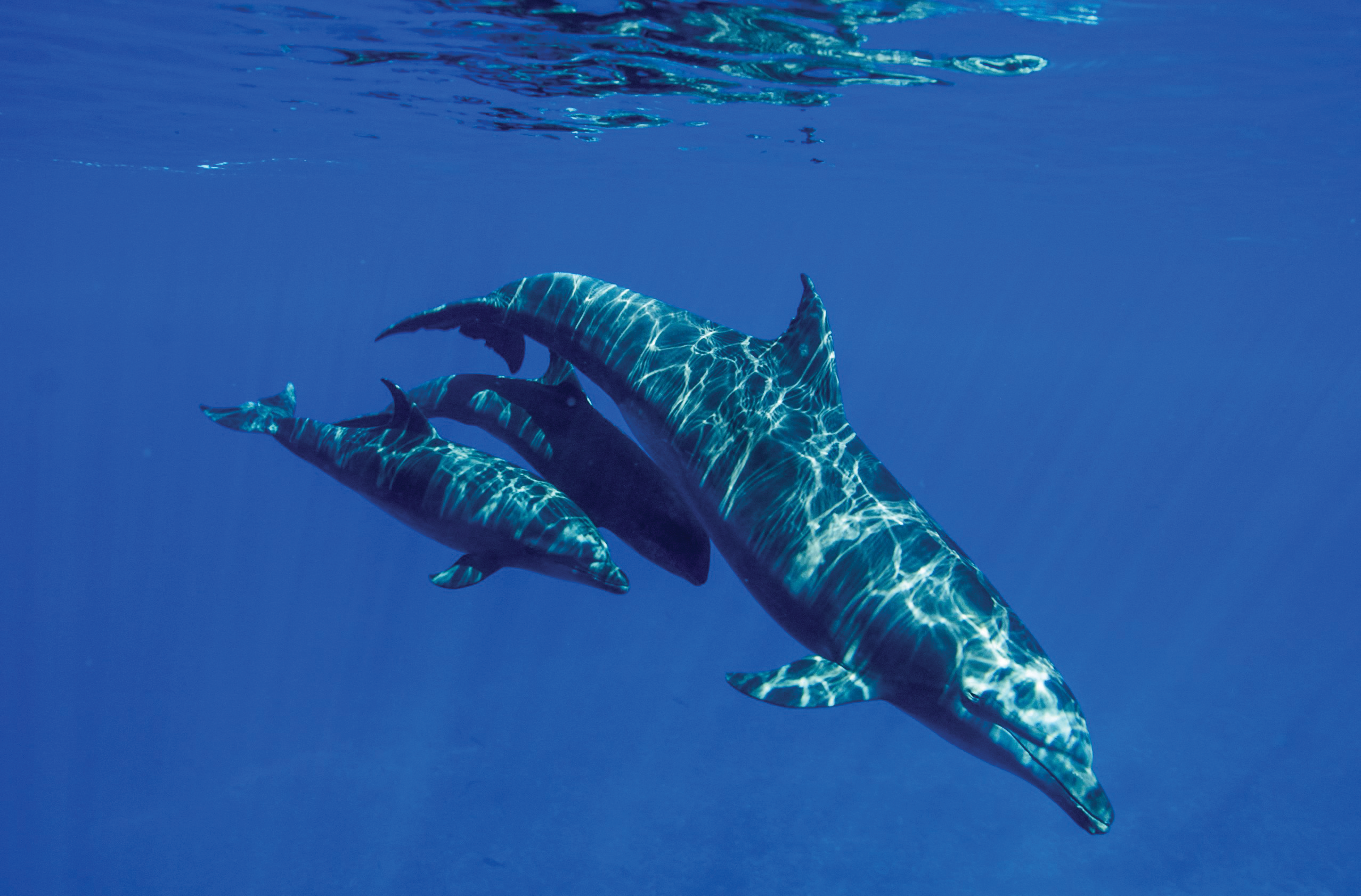 DOLPHIN ADOPTION: A female bottlenose dolphin in the South Pacific has been sighted with both her own calf and another young cetacean identified as a melon-headed whale.
Pamela Carzon, Marine Mammal Study Group of French Polynesia

The mother, dubbed ID#TP25 by the researchers, was known to tolerate divers and boats, and that April day she approached the inflatable with both calves. Carzon grabbed her underwater camera and slipped into the water. “I was able to get good underwater footage and to sex both calves,” she says. ID#TP25’s natural calf was a female; the second calf was male. “I also noticed that both were ‘gently’ pushing each other [in order] to remain under the adult female’s abdomen” in so-called infant position. Continued observation over the following months revealed that the dolphin mom was nursing the foreign calf, whose species ID remains to be confirmed with genetic testing, and otherwise treated him as one of her own.

Carzon had been studying the bottle-nose dolphin community inhabiting the northern part of Rangiroa atoll for a decade and knew that the cetaceans had a history of bringing young animals of other species into their group. In 1996, researchers observed a newborn spinner dolphin (Stenella longirostris) swimming in the slipstream of an adult male bottlenose—a behavior known as echelon swimming and a common interaction between mothers and calves. Scientists also regularly spotted a juvenile spinner dolphin over the next two years, often with a particular adult female bottlenose, Carzon says, although it’s not clear whether it was the same individual they saw as a newborn. Then, in November 1998, a newborn melon-headed whale spent a few weeks in the area and was filmed swimming in echelon position with the same female bottlenose that had associated with the young spinner dolphin.

More recently, another adult female bottlenose in the same community has twice been seen with young of a different species. In January 2011, she was spotted with a neonate spinner dolphin for a few days, and in February 2018, she was photographed with a newborn Fraser’s dolphin (Lagenodelphis hosei), which swam alongside her in echelon position. With such behaviors apparently relatively common within this social group, ID#TP25 may have picked up a thing or two from her conspecific companions, speculates Carzon. “The evidence that bottlenose dolphins are capable of imitation is very strong,” she says. “[S]ocially transmitted ideas or practices from cultural models may have influenced [ID#TP25’s] behavior.”

The adoption was stable, last­ing more than two years.

As is the case with most animal adoptions in the wild, how the mother bottlenose came to acquire the melon-headed whale calf is unknown. The calf’s natural mother may have died, or the bottlenose dolphin group may have “kidnapped” it, a behavior that was once observed in a dolphin group in the Bay of Gibraltar, Carzon notes. Whatever scenario landed the outside calf in the care of dolphin ID#TP25, the adoption was stable, lasting more than two years. ID#TP25’s naturalcalf disappeared by early 2016, suggesting it died or weaned early, possibly joining another social group.

There is only one other published case of intraspecies adoption by animals in the wild: for about 14 months in the early 2000s, researchers documented the integration of an infant marmoset (Callithrix jacchus) into a group of capuchin monkeys (Cebus libidinosus) in woodland savanna of central Brazil. A female monkey that the researchers had thought was pregnant but who perhaps lost her own baby cared for the infant marmoset, carrying it on her back and appearing to nurse it. “It was amazing because when she appeared, she was tiny tiny tiny,” says Patrícia Izar, a primate ethologist at the University of São Paulo in Brazil who observed the adoption. “She was really a newborn, and she survived.” Izar says she was particularly astonished because she knew that some groups of capuchin monkeys eat young marmosets. Care for the young animal was eventually assumed by another female capuchin, and all group members appeared to tolerate the marmoset’s presence.

As for why intraspecies adoptions do—rarely—occur, wildlife conservation professor Robert Young of the University of Salford in the UK suggests that animals may not recognize that they’re caring for young of another species. In the case of the dolphins, the presumed melon-headed whale is similar in size to the adoptive mother’s own bottlenose dolphin calf, and the dolphins have not evolved a strong ability to differentiate their own young from those of another species. “There’s good reason to think it’s just an identification problem,” says Young, who says he has observed a handful of intraspecies adoptions among black-fronted titi monkeys (Callicebus nigrifrons) in Brazil.

The high levels of oxytocin coursing through mammalian mothers’ bodies and the abundance of resources are also likely to be relevant factors. Indeed, in the case of the capuchin group that took in a marmoset baby, Izar and her colleagues had been providing coconuts to study the animals’ use of stones to crack the fruit open, meaning that the monkeys had plenty of food to eat, and so looking after additional young might have been less costly. Interspecies adoptions are also much more common among domestic and captive animals, for whom food is often plentiful, than they are in the wild, Young notes. “If you’ve got a lactating female dog, you can just about get it to rear any other mammal.”

Documented cases of interspecies adoption among the Rangiroa dolphins and Brazilian monkeys “shows that it’s not impossible,” says Izar. “I think that in time we will have other cases in the wild.”