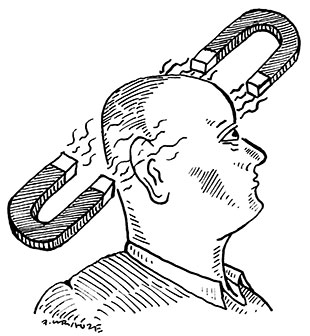 ANDRZEJ KRAUZEWhen something goes wrong with neurons located deep in the brain, options for treatment are limited. Directly stimulating the neurons can be effective, but cutting through brain tissue to implant the necessary electrodes is risky. And magnetic or electrical pulses applied to the skull only reach the brain’s outermost regions. But the highly networked nature of the brain presents another possibility: noninvasively alter the activity of the neurons at the brain’s surface to indirectly affect the deeper brain regions they’re connected to.

Following this logic, neuroscientist Joel Voss’s group at the Northwestern University Feinberg School of Medicine and colleagues performed repetitive transcranial magnetic stimulation (rTMS) on subjects who then underwent memory testing. The researchers targeted rTMS to an area at the surface of each participant’s brain that they had determined to have rich and active connections to the more deeply positioned left hippocampus, which is known to...

Voss and his colleagues found that memory improved following rTMS (Science, 345:1054-57, 2014): 12 study participants could remember a couple more words after the week of stimulation, says Voss’s postdoc Jane Wang, first author on the study. “We were all pretty surprised,” she says. “It was sort of a long shot to begin with. But when we ran four additional subjects, we saw the same effect.”

In the fMRI data, Wang saw increased blood flow in the hippocampus and four brain regions thought to interact with the hippocampus, suggesting that, following stimulation to the brain’s surface, the connections between each of those areas and the hippocampus grew stronger. “TMS doesn’t just change [brain] activity, it changes how areas communicate with each other,” says Colin Hawco, a postdoc at the University of Toronto and the Centre for Addiction and Mental Health (CAMH). “And that’s a really important measure of brain function.”

The hippocampal network connectivity changes point to the possibility that the general strategy of stimulating brain regions connected to targets deeper in the brain may work. “I think that the concept of picking out a TMS target based on connectivity to other sites is very exciting,” says Michael Fox, a neurologist and neuroscientist at Harvard Medical School and associate director of the Berenson-Allen Center for Noninvasive Brain Stimulation. To identify other deep brain regions that might similarly be targeted by stimulating particular surface areas, Fox and his colleagues used deep-brain stimulation (DBS) data to track connectivity from the inside-out.

TMS doesn’t just change [brain] activity, it changes how areas communicate with each other.—Colin Hawco, University of Toronto and the Centre for Addiction and Mental Health

Reviewing the literature on 14 different diseases that had responded to treatment by deep-brain and noninvasive stimulation, the researchers found that effective noninvasive sites were functionally connected to effective DBS sites, suggesting that the deep-brain and surface sites are simply different nodes within the same brain network. “We show that [this technique] actually picks out sites that have been found to work for noninvasive brain stimulation,” Fox says.

So far, the only US Food and Drug Administration–sanctioned use of TMS involves patients with treatment-resistant depression, but Fox and other researchers are studying other applications of noninvasive brain stimulation. Wang’s recent results suggest that the technique could one day aid in the treatment of Alzheimer’s disease, but she warns that the research “is still quite preliminary.” The group has secured a grant from the National Institutes of Health to study the effect of rTMS on memory performance in older adults, and they hope to eventually test the technique in people with early-onset Alzheimer’s or mild cognitive impairment. “[We’re] trying to see if there’s a way that we can modulate or adjust their memory networks to be more in line with healthy, young-adult memory,” Wang says.

Fox is hopeful. “I think that if the results are true and replicated, it’s very exciting for the field of memory disorders.”