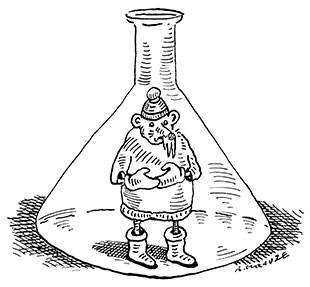 A few years ago, tumor immunologist Elizabeth Repasky realized that she had heard from too many oncologists, colleagues, and friends that cancer patients regularly reported feeling cold and unable to regulate their internal thermometers. At her lab at the Roswell Park Cancer Institute in Buffalo, New York, she decided to build on her experience studying thermal physiology and immunology to see exactly what might be going on with regard to temperature and cancer. “I’ve always gone around telling people it’s really important to be warm,” she says. “Being warm is a really important part of dealing with diseases like cancer.”

Laboratory mice are routinely held at temperatures well below what’s called their “thermoneutral zone,” or the temperature range in which their metabolism functions most efficiently, without the need to expend excess energy to heat their bodies. The murine thermoneutral zone (TNZ) is variously defined as from about 26–34...

So Repasky and her Roswell Park colleagues held mice modeling tumor growth at two different temperatures—either at the standard temperature of about 22 °C or at 30 °C, a temperature in the middle of their TNZ. What Repasky and her colleagues found was nothing less than astonishing. Tumors in colder mice grew faster and more aggressively than those in mice housed at the warmer temperature. And this trend held true across a variety of cancer types—breast, skin, colon, and pancreatic. Looking deeper, the researchers found a systemic suppression of the antitumor immune response in the colder mice. Mice held at warmer temperatures had increased numbers of tumor-attacking T cells and reduced numbers of immunosuppressive cells and regulatory T lymphocytes (PNAS, 110:20176–81, 2013).

Our control groups are too cold. We’re not even modeling the healthy mouse with our current conditions.—Elizabeth Repasky,
Roswell Park Cancer Institute

Repasky’s results add to the growing body of research that illustrates dramatic physiological differences in mice housed at temperatures below their TNZ: they have twice the heart rate of animals housed in warmer conditions; gain weight faster and become more obese at earlier ages; have higher levels of lipids in their blood; and exhibit a higher respiration rate. “Across biomedical research, we need to pay attention to the model we’re increasingly using,” Repasky says. “Our control groups are too cold. We’re not even modeling the healthy mouse with our current conditions.”

And this means that cold-stressed mice could be skewing countless experimental results, past, present, and future. “A lot of these animals may have been more stressed than we could know, and that could have affected the interpretation of whatever effect [the researchers] were looking at,” says Chris Gordon, a physiologist at the Environmental Protection Agency who has studied the effects of cold stress in mice and who participated in Repasky’s study. John Norton, a Duke University pathologist, agrees. “Any stressors could affect the immune system and other physiological processes to give you different data outcomes,” he says.

But solving the problem isn’t as simple as cranking up the thermostat in mouse facilities at research institutions. For one thing, keeping mouse rooms at around 30 °C would make the environment nigh on intolerable for the researchers and lab techs who care for the animals. Typically, they wear layers of protective garb, including full body suits, masks, and goggles to prevent contaminating cages or becoming contaminated themselves. Also, the thermal preferences of mice change throughout the day, throughout their life spans, and with changes in behavior.

There may be more subtle ways to provide mice with temperatures that approach their preferred climate, according to Brianna Gaskill, an animal welfare specialist at Purdue University’s veterinary college. Increasing the numbers of mice allowed to inhabit a single cage and providing adequate nesting material furnish the animals with ways to increase their ambient temperature, even in a room that is maintained at the colder temperatures comfortable for their human caretakers. Such measures allow mice to “create a microclimate within the cage,” Gaskill says. And she has quantified some of the physiological benefits of environmental enhancements that enable this thermal microenvironment change. In a study that Gaskill and colleagues conducted on several strains of mouse models, they found that including 8 grams of nesting materials raised temperatures in the cages to about 32 °C, compared with the 20 °C temperature of the room. This local temperature change reduced circulating thyroid hormones in male mice that had access to nesting material. And in at least one of the strains provided nesting materials, the activation of UCP1—a protein that is pivotal to thermogenesis in brown fat—decreased (Phys & Behav, doi: 10.1016/j.physbeh.2012.12.018, 2013).

As the evidence has mounted that temperature affects mouse physiology, the authors of animal care guidelines and the agencies that use those guidelines to accredit facilities for the use of laboratory animals have paid attention. In 2011, the National Research Council committee charged with updating the Guide for the Care and Use of Laboratory Animals changed the recommended housing temperatures for mice used in research from 18–26 °C to 20–26 °C. And Chris Newcomer, executive director of the Association for Assessment and Accreditation of Laboratory Animal Care (AAALAC) International, says that though his organization is concerned primarily with animal welfare rather than research outcomes, it does strongly recommend that the research institutions it works with be aware of the growing body of literature that indicates physiological perturbation in cold-stressed mice. “We tell the institutions and the [Institutional Animal Care and Use Committees] that in the course of reviewing protocols you should be conscious of emerging science and best practices,” he says. “We like to convey that to organizations, but we don’t use it as the linchpin to whether or not an organization is accredited.”

AAALAC and other accrediting and regulatory bodies, including the National Institutes of Health’s Office of Laboratory Animal Welfare, may consider expanding on the recommendations they make regarding the provision of nesting materials, shelter, and other means of regulating the thermal environment. “I do think there’s a breaking point,” Newcomer says. “This has been discussed already in the circles of laboratory animal science. There is a breaking point, but I just don’t think that that breaking point is here yet.”

In the meantime, the people at research institutions who are tasked with maintaining colonies of experimental animals are ready to assist scientists who want to test the effects of housing temperatures on their mice. Sandra Sexton, the facility director and attending veterinarian for Roswell Park’s Laboratory Animal Resources, says she’s prepared to replicate Repasky’s experiments in other model organisms under her care. “I will be the first one to assist any of our researchers to explore that and do something similar to what we did for [Repasky],” she says. Norton, director of Duke’s Division of Laboratory Animal Resources, agrees. “We could provide rooms with different temperatures with approval of [Duke’s Institutional Animal Care and Use Committee] and our clinical veterinary staff,” he says. “You’ve got to have the proper controls in any experiment to properly test your hypotheses.”