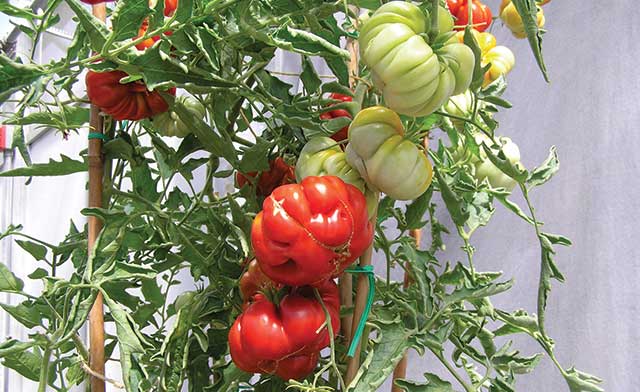 UGLY FRUIT: Some tomato varieties, such as this one with mutations in the lc and fas genes, grow interestingly shaped fruit.ESTHER VAN DER KNAAP

He doesn’t garden at home, but plant geneticist Zachary Lippman does cultivate his own small kitchen crop of grape tomatoes among the five acres of the fruit grown for research in Cold Spring Harbor Laboratory’s fields each year. Having studied tomatoes for nearly two decades, Lippman, an associate professor at Cold Spring Harbor, knows the fruit well. He’s partial to plants that produce smaller tomatoes, because they “grow like weeds” compared to the many hefty varieties commonly found at farmers’ markets.

“Since domestication, diversity at the genome...

The potential is vast for all crop plants.—Elizabeth Repasky,
Roswell Park Cancer Institute

By identifying mutations affecting flowering, fruit size and shape, and nutrient content, among other characteristics, Lippman and other researchers hope to improve the agricultural output of tomatoes and other food plants.

In 2008, four years before researchers published the full S. lycopersicum genome, a team led by Cornell University’s Steven Tanksley—who was Lippman’s undergraduate research advisor from 1997 to 2000—identified a mutation in fasciated, a gene encoding a transcription factor, that appeared to be responsible for the beefsteak phenotype.

As it turns out, the fasciated mutation, which can alter the number of seed-bearing structures called carpels in fruit, was only part of the puzzle.

Working independently to determine the genetic drivers of inflorescence architecture and fruit morphology, respectively, Lippman and Esther van der Knaap, an associate professor at Ohio State University, converged on the same pathway. The CLAVATA gene-signaling pathway, well studied in the model plant Arabidopsis, had been overlooked by researchers working on the tomato. Realizing their research goals overlapped, Lippman and van der Knaap—who had worked together before in Tanksley’s lab at Cornell—decided to collaborate. Through a series of forward genetics and targeted mutagenesis experiments, they homed in on three genes that caused an increase in branching and flower production, as well as in the size of fruit.

“We thought that we were going to land on some known genes already described in other plants [that] control stem cell production,” says Lippman. “We didn’t.”

Instead of finding genes that directly affected stem cell populations within the shoot apical meristem, the plant tissue where most growth occurs, the researchers found genes that encode enzymes, called arabinosyltransferases, which add a sugar called arabinose to other proteins, affecting meristem size. Three different arabinosyltransferase-gene mutants showed enlarged apical meristems and varying degrees of the beefsteak phenotype. The finding added a new layer of complexity to the genetic control of meristem size in tomato plants.

“We’ve actually demonstrated that [altered expression in] the fasciated locus is due to a change in the promoter sequence of CLAVATA3,” says van der Knaap.

While knockout experiments pointed to the fasciated mutation reported in 2008, van der Knaap, Lippman, and their colleagues found mutations that directed the expression of that mutation. “Phenotypic traits [are governed by] complex genetic mechanisms. It’s possible to knock one gene out and find out that gene is partly responsible for that phenotype, but it’s almost never going to be the only gene responsible for that phenotype,” says Amy Litt, an assistant professor of plant evolution and development at the University of California, Riverside, who has collaborated with Lippman but was not involved in this research. “People thought that they knew which genes were responsible for the fasciated mutation, and then Lippman and his colleagues discovered that there’s another gene, CLAVATA3. It’s interesting that people sort of thought they had answered the question, but it turns out there was more to the answer.”

Homing in on the CLAVATA pathway, Litt adds, the researchers “found a link in an incredibly important mechanism that affects not only tomato fruit size, but affects the size and arrangement of pretty much all [plant] organs.”

“This provides one possible explanation why, during domestication, selection for larger and larger fruit with more and more compartments also resulted in larger and larger plants with larger leaves and thicker stems—a whole syndrome of gigantism,” says Roger Chetelat, director of the C.M. Rick Tomato Genetics Resource Center at the University of California, Davis, who was not involved in the work. The results “could give clues to geneticists working on other fruits on some genes to check for homologs,” says Causse, who has collaborated with van der Knaap but was not involved in the work, “particularly for fruits in which meristem size” can be manipulated.

Lippman and his colleagues are now working to manipulate CLAVATA signaling to improve crop productivity in tomato and other plants.

“The potential is vast for all crop plants. Stem cells . . . are required for continuous plant development throughout life, and the stem cell population [in the meristem] is balanced in a precise way,” says Lippman. “There’s this small window where the stem cell number is optimal for what nature has selected for.”

The number of rows of kernels on a cob of corn, for example, appears proportional to the number of stem cells residing in the meristem. “More stem cells, more rows,” Lippman says.

But with crop plants, bigger is not always better. And increasing production can come at a price. “If you mutate CLAVATA3, you swing the pendulum really far to one side, such that now you’re really out of control—you’re going to make way too many stem cells,” says Lippman. “That’ll give you a lot of kernels or it’ll give you really big beefsteak tomatoes, but the problem with that is it compromises other aspects of growth,” such as the plant roots’ ability to take up additional water or the stalk’s ability to support larger fruits. The key to using the newly identified genetic pathway to manipulate fruit size could be subtlety. “Maybe you can move the pendulum just a little bit,” he adds. “I think the potential is there to fine-tune the system of stem cell control.”