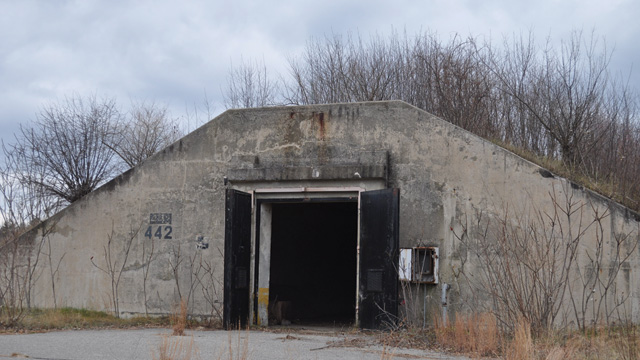 HUNKERING DOWN: The Cold War bunker into which Steve Agius, Scott Darling, and colleagues, transplanted sick bats for the winter.SUSI VON OETTINGEN, USFWS

Last winter, Steve Agius of the Aroostook National Wildlife Refuge in northern Maine found himself decorating a Cold War-era bunker, instead of a Christmas tree. And rather than hanging ornaments, he was hanging bats.

In late December, biologists in Vermont and New York State collected 15 little brown bats (Myotis lucifugus) from each state and delivered all 30 to the northeast corner of Maine—just a few hundred kilometers due east of Quebec City. All of the bats showed signs of white-nose syndrome (WNS), a fungal disease that has been decimating bat populations across many states, and the researchers were hopeful that the animals would survive the winter in a disease-free spot.

To minimize stress in the hibernating animals, the bats were transported in...

Wildlife biologists have been discussing using wartime bunkers as overwintering sites for the threatened species for several years. In March 2010, endangered species biologist Susi von Oettingen of the FWS’s New England Field Office learned of a World War II bunker in New Hampshire that bats had begun using as a natural hibernaculum. And even before that, biologists had flagged bunkers as potential research sites. “The ability to have a controlled environment where you could put bats in for experimental purposes could be a valuable tool,” says wildlife biologist Carl Herzog of the New York State Department of Environmental Conservation.

But the bunkers’ real pull was their ability to be disinfected. “The whole idea is based on having a site that can be decontaminated every year,” says Herzog—“something that we really can’t do on a practical scale in a natural cave or even the mines that many of our [New York] bats use for hibernation sites.”

So in the winter of 2011–2012, von Oettingen and others equipped bunkers in New Hampshire, Maine, Massachusetts, and Maryland with sensors to monitor temperature and humidity. Based on the results, they selected the Maine bunker as the most suitable for the first trial run. The following December, Darling and Herzog each collected 15 male little brown bats from caves in their respective states, and Darling shuttled them up to Aroostook, where one bunker had been equipped with an extra layer of external insulation, and with pools of water placed on the floor to boost humidity and serve as hydration sources for the bats.

With four motion-activated infrared cameras and frequent snowmobile visits to the bunker, Agius monitored the animals over the winter. They didn’t immediately return to their winter torpor—most of them ended up moving to a different part of the bunker—but “within less than 12 hours, they had already gone back to sleep,” Agius says.

Unfortunately, only nine of the 30 infected animals survived the winter. Nevertheless, the team is optimistic. “With this disease, any kind of disturbance that they get while they’re hibernating exacerbates the mechanism that kills the bats,” says Herzog. Though its exact pathogenesis is unclear, the fungus is deadly because it disturbs the animals during their winter slumber, which causes them to burn through their approximately 1-gram fat reserve. Any additional disturbance to sick bats can kill them. Given the collection and transport required to get the bats to the Maine bunker, “the prospects of survival in this experiment were never likely to be 100 percent,” Herzog says, and the fact that any survived at all can be considered a victory.

The big question now is how easy the bunker will be to sterilize. After returning the survivors to their respective homes in March, the team swabbed the bunker for evidence of the WNS-causing pathogen, Geomyces destructans, which can survive outside its host. Agius says they expect those results sometime this month. Later this summer, Agius will disinfect the bunker, then swab again. If the samples come back clean, Agius plans to start attracting bats to the Aroostook bunkers naturally, so as to avoid handling the animals at all. He will use what’s called a “social attraction system,” which he says has been employed successfully in puffin populations on the coast of Maine. In the case of bats, Agius will broadcast bat swarming calls, which the animals emit just before and after hibernation, and which he hopes will convince some of the bats that roost in the refuge to stay for the winter.

Furthermore, clean swabs would indicate that bunkers can be disinfected year after year and potentially serve as a promising management tool for WNS. But, Herzog emphasized, “this is an approach of last resort. We don’t want to do captive management; we want these animals to be self-sustaining.” On the other hand, he added, “if we’re faced with the alternative of extinction—and that is certainly a possibility for some of the species that are affected by this disease—then [we’ll consider] some sort of captive or semicaptive management process.”