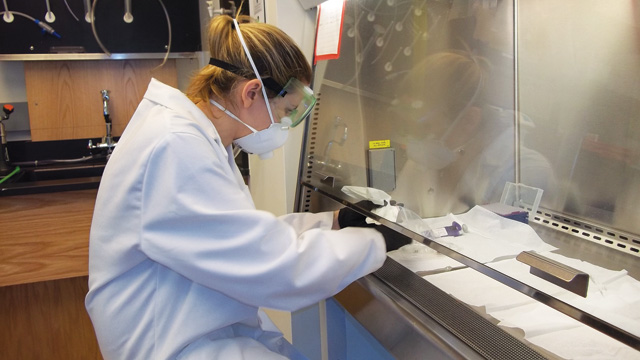 In October 2008, US Customs and Border Protection agents at John F. Kennedy International Airport in Queens, New York, seized a suspicious postmarked container shipped from Nigeria. Moments later, at the airport’s Centers for Disease Control New York Quarantine Station, personnel in full protective gear gingerly opened the package and pulled out dark, misshapen objects—hunks of meat. They photographed and cut off a sample from each, placing them into a container of liquid nitrogen. The remaining meat was incinerated.

In the following 2 years, US Customs confiscated an additional seven postal shipments at JFK and seized 20 more packages straight out of the arms of passengers at four other US airports. Some of the meat was dried, some smoked, some still raw and dripping blood.

The frozen samples collected between 2008 and 2010 were identified and analyzed by researchers at the CDC National Center for HIV/AIDS and Columbia University’s Center for Infection and Immunity. Since investigators couldn’t determine the species of many of the specimens by sight, the team used DNA barcoding—a popular way to identify a species using only a tiny snippet of one mitochondrial gene—to ID 9 primates and 35 rodents, including some threatened and endangered species. But the scientists were less concerned with the species of the tissue samples and more worried about potentially lethal hitchhikers lurking in their cells.

The team screened the meat for multiple pathogens and got unsettling results: the rodents were free of viruses, but half of the primate samples were riddled with simian foamy virus (SFV), cytomegaloviruses, and lymphocryptoviruses, all of which can pose a threat to humans. Scientists have already documented that SFV, which is related to HIV, can cross over into human populations, though those infected with the virus have not become ill. The finding implies that other, more virulent simian viruses could also reside in imported bushmeat, says William Switzer, a retro-virologist at the CDC who screened the meat for SFV. “This is a way for viruses to bypass human carriers and go directly into a biomaterial to expose people in distant locations,” he says. “I believe if we had tested a larger number of confiscations, we would have found more of these known pathogens,” Smith says.

That viruses are present in the imported meat is not surprising, says Mark Woolhouse, a professor of infectious disease epidemiology at the University of Edinburgh in Scotland, who was not involved in the study. “But this is the first time it’s been properly demonstrated in a systematic way,” he says.

The researchers did not assess how efficiently the viruses could infect human cells, but the spread of infections to humans via the animal trade is well documented. In June 2003, 93 cases of monkeypox in the United States were traced to contact with prairie dogs that got the virus from an imported Gambian giant rat. In 2007, an outbreak of bird flu at farms in the United Kingdom was traced to imported Hungarian poultry. “This is not just a theoretical possibility,” says Woolhouse. “This is a cause for concern.”

The pilot project has since expanded to 12 US airports, but the scope of the problem—just how much illegal meat is imported and what types of viral stowaways are onboard—remains unknown.  “We just don’t know how often this is happening,” says Switzer. “We may be seeing just the tip of the iceberg.” As sequencing technologies become cheaper, the possibility of wider surveillance of both the legal and illegal animal trade will be more feasible, says Woolhouse. But random screening alone isn’t going to solve the problem. Instead, the animal trade needs regulation to ensure that only healthy, disease-free animals pass from country to country. “There really hasn’t been a big push for this in the international arena,” says Woolhouse. “This is a wake-up call that it needs to happen.”