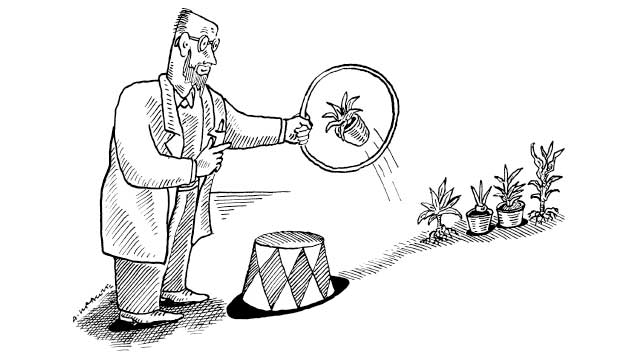 In 2007, plant biologists passionately argued the meaning of the word “neurobiology.” The year before, an article published in Trends in Plant Science had announced the debut of a new scientific field: plant neurobiology. The authors suggested that electrical potentials and hormone transport in plants bore similarities to animal neuronal signaling, an idea that raised the hackles of many a botanist. Thirty-six plant scientists signed a letter briskly dismissing the new field, calling the comparison between plant signaling—intricate though it is—and animal signaling intellectually reckless. “Plant neurobiology,” they wrote, was no more than a “catch-phrase.”

Upon close examination, the “neurobiology” debate did not center on very much scientific disagreement. Researchers in both camps agreed on the general facts: plants did not have neurons, nor did they have brains, but they did possess complicated, poorly understood means of responding to the environment that deserved rigorous study. The community...

The rhetoric surrounding the argument has since cooled, but the debate was never entirely resolved. And in 2016, Monica Gagliano of the University of Western Australia and colleagues provided fresh fuel for the conceptual fire. The researchers conducted an experiment that they say shows plants performing associative learning (Sci Rep, 6:38427). This type of learning is the same process by which a dog can learn to associate the sound of a bell, as in Pavlov’s famous study, with a treat, and then salivate with anticipation every time a bell rings. The group’s experiment, modeled on Pavlov’s, was designed to subject pea seedlings to analogous stimuli and find out what the plants could learn.

The seedlings were grown in Y-shape tubes for about a week, receiving eight hours of light a day. Then, they were enrolled in a three-day training course. The grow lights were turned off, and three times each day, a small fan blew a light breeze down one arm of the Y-tube for an hour and a half. Beginning after the first hour of that period, the plants were given a one-hour dose of blue light (overlapping for one-half hour with the fan), their only sustenance during otherwise lightless days. For some, the breeze and the light came down the same arm of the Y. For others, the two stimuli came from opposite directions. In both groups, the stimuli were switched randomly from left to right between sessions, and a pilot experiment showed that the breeze had no influence over growth on its own. For all intents and purposes, the breeze was only meaningful to the plants insofar as it predicted where light would soon appear, the authors reasoned.

Unless we really explore the field experimentally, then we are just plant philosophers—
and there are already plenty of good philosophers around.—Monica Gagliano,
University of Western Australia

On the fourth day, seedlings had approached to within a centimeter or so of the bifurcation in the Y, and they were kept in the dark that day. A control group was left undisturbed, while a test group got the usual three courses of gentle breeze, but this time without the accompanying light. The fan breeze was applied in a direction that “predicted” light to appear opposite the side where it had last appeared.

The seedlings continued to grow, never bumping against the fork of the Y-tube but bending left or right. In doing so they made a choice, so to speak, to grow in the direction of their own survival. Of the 19 plants in the control group, 100 percent extended in whichever direction the light had last come from, exhibiting the well-known affinity of young plants for blue light. The 26 plants in the test group, however, had a decision to make. They could persist in the most recent direction of the blue light like the control group, or grow in the opposite direction, where the fan predicted light should appear—that is, show that they had “learned” something about the meaning of the breeze. Around 65 percent chose this latter option.

“This is exactly what Pavlov did,” Gagliano says. “If this were an animal of any kind,” rather than a pea plant, “this would be considered learning.” However, the experiment is notably limited in scope. A crucial feature of learning in animals is the flexibility to key in on virtually any stimulus. Rats, for example, can just as easily be trained to respond to a light breeze as to the sound of a bell or to vibrations in the ground, because the underlying neural mechanism is not stimulus-specific but all-purpose. Plants are known to respond to many aspects of their environment, from air temperature to soil moisture, but the extent to which a plant can build associations between stimuli other than blue light and a breeze remains to be seen.

The study by Gagliano and her colleagues was also short on controls, says Lincoln Taiz, professor emeritus at the University of California, Santa Cruz, who signed the 2007 letter criticizing the concept of plant neurobiology. Gagliano and her colleagues showed that the fan’s light breeze neither attracted nor repelled plants, but did not test whether the breeze interfered with the innate attraction toward light. Taiz points out that the slight rotating motion of a growing shoot’s tip, called circumnutation, influences growth patterns such as phototropism and could have been disrupted during the test.

Gagliano acknowledges the need for further work to explore how broadly the associative process can be generalized and to search for a mechanism that might account for it. “This is the beginning,” she says. “We needed to first show that learning by association was even possible.” Gagliano is no stranger to controversy, having weathered heavy criticism for her previously published evidence for habituation—a different type of learning—in plants, along with other findings.

As with earlier papers that sought to attribute animal-like behavior to plants, critics are likely to take issue with the authors’ use of words typically reserved for animals, including “learning” and “memory,” in much the same way researchers debated the moniker “plant neurobiology.” Those discussions are valuable and illuminating, says Gagliano, but should not obscure the underlying scientific exchange. “Unless we really explore [the field] experimentally, then we are just plant philosophers—and there are already plenty of good philosophers around.”