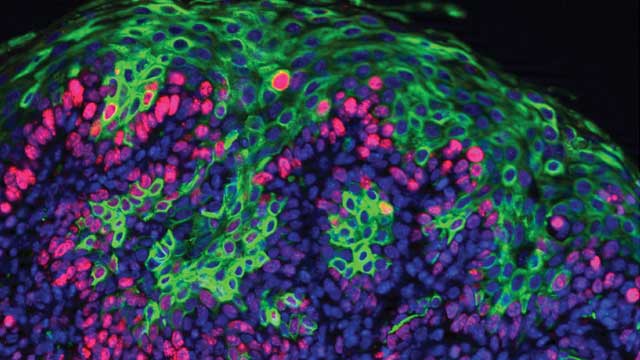 THE FATE OF CANCER: Within a squamous cell carcinoma, tumor cells fluoresce green, indicating that they are derived from basal cells.COURTESY OF CATHY MENDELSOHN

Marine invertebrates may be unassuming creatures, but at the turn of the 20th century they found themselves at the heart of a scientific controversy. In 1891, the German biologist Hans Driesch claimed that each of the four cells in an early-stage sea urchin embryo, if separated, could give rise to an entire larva. Four years earlier, however, Laurent Chabry’s experiments had shown that each cell from an equally early-stage invertebrate—a sea squirt, or tunicate, which has a chordate larva—could only make a partial embryo. To resolve the conflict, Edwin Conklin spent the summer of 1904 hunched over a light microscope in Woods Hole, Massachusetts, observing the development of one of these tunicates, Styela partita. His detailed drawings of the embryos’ bright yellow crescent...

Over the next century, researchers fine-tuned the technique by adding dye to embryos that weren’t naturally colored, as were those of sea squirts. Walter Vogt injected dye into frog embryos in 1929, and by the 1990s researchers had developed rudimentary genetic dyeing techniques. These days, researchers can insert the label directly into a mouse genome using two transgenes. One gene encodes a site-specific Cre recombinase under the control of a cell type–specific promoter, and the other encodes a fluorescent reporter, separated from a constitutive promoter by a stop codon that is flanked by the sites recognized by Cre. Targeted cells with both genes express the fluorescent label, as do all of the cells’ future daughters, since the stop codon in front of the fluorescent protein gene has been permanently disabled.

Developmental biologist Alexandra Joyner’s lab at Memorial Sloan Kettering Cancer Center, one of the first groups to use the technique to map the mouse midbrain and anterior hindbrain (cerebellum), soon noticed that there was a problem with the system. “To be really sure that you’re following the fate of cells, you need to know you just marked them at one time, and that you could never mark them later,” Joyner says. To avoid this issue, researchers developed an inducible system, where the Cre reporter will only become active at the moment that the mouse is treated with the drug tamoxifen. This was how Cathy Mendelsohn and her group at Columbia University traced the origin of new urothelium, the inner bladder lining that regrows to replace tissue damaged by a urinary tract infection. Most scientists assumed that the bladder lining would be similar to our skin, where stem cells lurk in a basal layer and give rise to all the cell types needed. But Mendelsohn and her colleagues used fate mapping to determine that the cells of the urothelium are instead “just another population that can self-renew but not generate other cell types,” she says.

Having used fate mapping to learn about normal recovery from injury, Mendelsohn wondered what might be happening in bladder cancer. “It’s really important that you have a way of tagging, or you could never find the daughters otherwise,” Mendelsohn says. Tumor cells in the bladder look nothing like the cells from which they arose, she explains. So Mendelsohn decided to apply fate-mapping techniques to help answer a contentious question in the field: “Do different types of bladder cancer arise from different cell types?”

Mendelsohn and her colleagues searched for the cell types that give rise to preinvasive carcinoma in situ, which sits in the bladder’s lining, and the presumably noninvasive papillary carcinomas that she describes as looking like “a hand that grows up out of the urothelium into the bladder lumen.” Her team’s lineage-tracing experiments revealed that carcinoma in situ arises from basal cells, while papillary lesions come from a different cell type called intermediate cells.

Mendelsohn is not the only researcher interested in tracing cancers back to the cell type of origin. Columbia colleague Michael Shen and his group have recently done similar work in a prostate cancer model. “The prostate is another nice example of how they’ve used [fate mapping] to hit the basal cells and luminal cells,” Joyner says. Shen adds that the technique has stretched far beyond understanding tumors of the bladder and prostate. “You name a cancer, there are people trying to fate-map it,” he says.

And the power of fate mapping to trace the origins of tumors is far from being fully realized. “We could also look at the evolution of the lesion, from it being inside the urothelium to invading the tissue below,” Mendelsohn says. Dan Theodorescu, a urologic oncologist and bladder cancer researcher at the University of Colorado Denver, is particularly interested in using fate mapping to determine if cells originating in two different layers of the bladder result in two different tumor behaviors. “What you want to do is show that cancers coming from the basal are invasive, and cancers coming from the nonbasal cells are nonmuscle invasive,” he says. “And nobody has done that. That’s the key.”

There’s also an opportunity to use fate mapping to further fine-tune the cells’ origins. “You would like to be able to define specific subtypes within the basal or luminal compartments that are potential cells of origin,” Shen says. Researchers may be onto a way to do just that, by combining two different recombinases to “get a higher resolution of what cell type you’re marking,” Joyner says. “There are all kinds of new applications now combining . . . recombinases to allow us to ask even more interesting questions.”

“Fate mapping is really the only way to look at what a cell will do after a certain time,” Mendelsohn says. “I don’t think it would be possible to do this without . . . mouse models where you have genetic lineage tracing.”